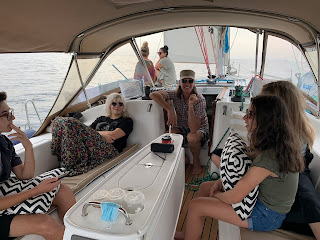 The Germann-Hinds are very special friends of ours. Dave is an artist who specializes in creating these amazing, giant aluminum paintings as well as huge welded structures, and is also a talented musician. Kira is an elementary school teacher who is an incredible cook and gardener and a gifted maker of all sorts of things. Upon first glance it might seem we wouldn’t have much in common, as they both come across as anti-establishment, hippie types while I would guess we come across as more conservative, working stiffs that follow the generally accepted rules of life – at least to some extent. But appearances are deceiving. Ana and Dave work together on public art projects. Kira and I love talking about cooking and sharing ideas on finances and investing. Dave and I jam on guitar, bass and drums whenever we can. Ana and Kira shop together at vintage and consignment clothing stores. In fact, we first started hanging with them when Ana kept running into Kira at Value Village, both of them digging through mountains of discarded clothes, looking for deals. The discussions we have together are intense and span across dozens of topics. Some things we agree on, some things we don’t, but it is always interesting, and more often than not, our discussions happen around a campfire with craft beer and cocktails. Each of us has a very different background and history and philosophy and we’re not afraid to challenge each others’ ideas or to open our minds to new concepts. The time we spend together is always enlightening and enjoyable. And to make it better, their two daughters Tula and Esme are the same ages as Magnus and Stella and they have all attended school together since kindergarten so have been friends since the start.

Spending a day in Toronto with these kinds of friends is very easy indeed. We began with a sailing trip to give them a small taste of SeaLight on the water and under sail. Beginning westward, we motored out into the open lake then raised the sails and sailed south then back eastward,  thereby circumnavigation the entire set of Toronto Islands. The winds were light but they were sufficent to move us along and soon there were bodies scattered all over the boat, enjoying the ride. We continued northwards into the eastern harbour entrance, then back across the Inner Harbour and into our slip. It was then time to take on the city, so we split off into groups: Adults (who act like kids), and Kids (who are looking increasingly adult-like) then went our separate ways with an agreement to meet back at the boat for dinner. 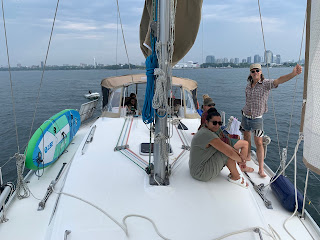 The adult team initiated our wanderings threading northward between Bathurst and Spadina, stopping for coffee, shopping, and sometimes just looking around at the buildings and people. We wandered around Kensington Market for quite some time before stopping for lunch at a cool little Portuguese café called Amadeu’s, where we were treated to not just a delicious light lunch, but a near rumble in the park, where these two honky hoodlums where shouting down a young black guy and challenging him to a scrap, while one of them was motioning to his bag, and making a pistol symbol with his hand. The profanities were shouted back in forth, with the gobsmacked diners simply sitting back and watching. It was not a good scene, but the tension was broken up magnificently when the waiter told us this was a ticketed event, and asked to see our ticket stubs. I got the feeling he was used to this.

After the action had died down without consequence, we continued our wanderings down the fine and so incredibly varied streets of Toronto. Dave and I spent some time in a record store, then a guitar shop while the ladies shopped for shoes and clothes. Dave was hot for a pastry but we just couldn’t find the right thing so we walked around until we ended up in front of the Roger’s Centre along with a thousand Blue Jays fans who were waiting to get in for a game. As non-baseball lovers, we escaped the throngs of blue shirted folk and returned to SeaLight for a couple rounds of craft beer and snacks.

The kids arrived shortly thereafter and an intense show-and-tell session ensured. Shoes, shirts, chopsticks, stuffed animals, foodstuffs - all were retrieved from shopping bags and proudly displayed or fashioned or eaten, to successive rounds of enthusistic clapping from the adults.

Depite the dozens of boats zipping around, large and confused waves, and iffy-looking water, Dave decided he need to conquer this harbour on a paddleboard. We unstrapped our paddleboard from the deck of SeaLight, launched it, then Dave hopped on and began his wobbly journey across the water. His dogged determination took him right into the middle of the harbour, narrowly avoiding collisions with seven cabin cruisers, three Sea-Doos, a giant firefighting vessel, two kite-surfers, eight sailboats, a dozen sea kayakers, fourteen high speed Pirate taxis, and finally a low flying Porter jet. But the worst was yet to come. One of the dock lads came by and asked, “Hey, is that your buddy coming on the paddleboard, who keeps falling off into the water?” 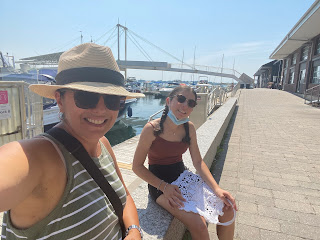 “Well you probably should know that there’s a major problem with the sewers here in downtown Toronto and quite often raw sewage spills into the harbour and a lot of it comes out right here.”

“Oh my god, how bad is it to be in the water?” Kira asked horrified.

“Well, I’d suggest he strips down and runs to the shower room for a scalding hot rinse off. While he’s gone you can pour some gas on the clothes he wore out there and burn them. Then burn the towel he uses to dry off.”

Dave arrived back at SeaLight, smiling widely, proud of his accomplishment, but confused by why everybody was avoiding contact with him. He was instantly whisked away to the showers by Kira while we destroyed his jean shorts and lifejacket.

As night descended we all went off our separate ways and picked up take-out for dinner, then assembled back in the cockpit for a smorgasbord of sushi, roti, veggie plates, bubble tea, and cake pops. We ate until we were full, launched into conversation, then eventually retired for the night as the clock closed in on midnight.

Posted by Kristofor Olson at 1:51 PM