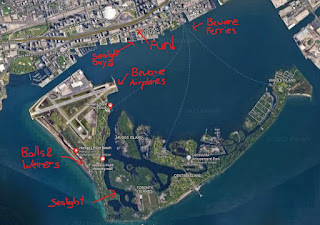 After a comfortable and easy overnight sail we arrived in Toronto, 21 hours after departing Kingston. Arriving in Toronto harbour was as magical as ever with the bold skyline, improbable beaches, and the exciting congestion of ferry boats in the inner harbour zipping back and forth between the waterfront and the Toronto Islands. We motored across the harbour and past the Billy Bishop airport into a public docking area in the islands known as Hanlan’s Point.

The Point is a long curving sea wall along a wide channel with good depths mostly throughout. There is a large and wide stretch of grass bordering the seawall which is dotted with picnic tables and firepits making this a very desirable place to park your boat for a day or two. After tying up you are required to walk down to the dockmaster shack, pay your dockage fees (which are very reasonable), then post the receipt on your boat somewhere visible. The wall was already packed full of boats when we arrived but we managed to find an open spot towards the furthest end.

We lathered up with sunscreen as it was already hot and sunny and set out on a walk. This particular island in the chain is known for two things. First is the Billy Bishop Airport from which a lot of small commuter jets fly from, and there is a cool underground passenger tunnel linking the mainland to the airport. Secondly, is the nude beach on the west side of the island which faces out to Lake Ontario, and is also an extremely popular anchorage for boats, especially those with powerful stereos.

We walked nearly all the way down to the airport then circled back on one of the many surfaced paths towards the beach. We weren’t ready to strip down and get naked but we did walk down a path to the beach to have a peek. To myself I was thinking Here comes Boob City! but a I was a little disappointed to spot nothing but balls and wieners. Ana explained to me that this was primarily a destination for gay men, and once she mentioned that I did notice and awful lot of manly couples walking around. If you were an energetic gay man with a nice boat you could have a lot of fun in this place.

After a quick stop at SeaLight to load up on fluids, the three of us jumped in the dingy to go for a cruise. The channels that separate the many islands are perfect for dingy exploration and we saw all sorts of animals and humans along the way. We went past a mother duck and her ducklings, all swimming in formation. Stella spotted the ducks, then looks at me and says, “Let’s catch one.”

I revved up the mighty four horsepower Mercury outboard and we put the chase on the ducklings. I think they were used to people because they let us get quite close and Stella actually reached overboard to grab one but of course it was way too fast and easily scurried away. But I admired her evil inclinations and brief exposure of the sinister thoughts that clearly fester beneath that pristine veneer.

We tied up the dingy at Centre Island and got out to do some exploring. This is the island that has a small amusement park and a few restaurants and is generally teeming with people throughout the summer, as it was today. I was pleasantly surprised to see most people wearing masks, even while outdoors, which made sense with the tight congestion of people in some areas. Seem the pandemic is not quite finished yet.

I decided it was time for a swim so walked over to the beach on the south side of the island while the girls got in line for a beaver tail – a horrific Canadiana dough bomb covered in chocolate and sprinkles and sugar and peanut butter and any number of other toxic toppings. My swim was simply glorious and the water was clean and cool. There was a lifeguard on duty, but instead of sitting at the top of a beach tower, she was in an ancient looking rowboat paddling around in the cordoned off swimming area without any shade whatsoever. But I guess a summer job is a summer job. 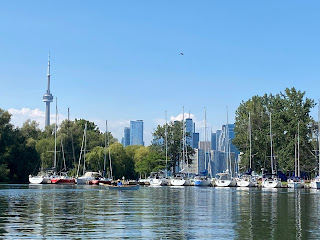 After walking the paths for a while we got tired of all the human activity so jumped back in the dingy and went for a nice long ride throughout the islands, passing by several marinas and snooping around all the fancy sailboats. We eventually found our way back to SeaLight and collapsed in the shaded cockpit for an extend chill out session. For me, this was probably the most relaxing few hours of the trip. I drank a beer, read a novel for a very long time, and even had an accidental nap in the warm cockpit stretched out on the comfy seat cushion. I don’t typically do a lot of relaxing on these trips as I’m usually either at the helm, navigating, fixing something, breaking something, cooking, or otherwise keeping myself occupied. So this was a welcome break.

It turned out Thursday was Steak Night! I scorched up a few New York Strips on the grill while Ana put together all the sides and Stella set the cockpit table. We enjoyed a lovely, and I mean really lovely meal in the cockpit, drank some wine, enjoyed the perfect temperatures, and didn’t run out of things to talk about until it was time for bed.

Posted by Kristofor Olson at 8:03 AM