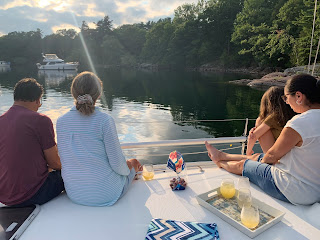 We awoke to overcast skies, rain, and blueberry pancakes. I really enjoyed one out of the three.

Despite the showers, Stella and I went for one last snorkelling expedition as she wanted to see the catfish. Despite finding the catfish den, and despite diving down multiple times and even wiggling my fin inside the hole, he did not appear. I was tempted to shove my entire arm in there and noodle him out like a Loooooo-siana hillbilly, but the thought of a thirty pound and heavily whiskered bottom feeder clamping down on my arm and dragging me around the bottom of the lake didn’t have much appeal. So instead we cruised around the weedbeds and saw many fish.

It was a short sail to the the lovely town of Gananoque, which has the heavist tourist footprint in the Thousand Islands. Of course all of our Quebeccer buddies had taken up the transient slips, but we lucked out by finding a single available spot in the free, short term public boat dock so we slipped SeaLight in with a shoehorn, tied her up, then went off to explore the Gan.

As is typical in such shore leave expeditions, the ladies went thrifting while Tony and I just wandered around with our hands in our pockets looking like a couple of lost tourists. We did stumble across an amazing opportunity to rack up some more karma points – an older couple (let’s call them Mr and Mrs Jellybean) had just driven their small sedan over a bridge and had picked up something along the way that had become wedged under their car. Despite wearing our best shore leave outfits, we both fell prone to the ground in the gravel and started prying, beating, kicking, probing, smashing, coaxing, tugging, and wrenching the object from various directions using various limbs, but to no avail. We did discover that the object was a door from a mini-fridge, though why it had been abandoned on a bridge, or what had happened the fridge body remained a mystery. A quick look at Mr. Jellybean confimed he too had no idea where they had picked up this unwanted guest.

Tony came up with a brilliant idea. I would lay down in front of the car and they would drive the front tires up on top of me in order to gain some clearance. From there I would reach out with my last breath and strike the fridge door clear of the vehicle. I considered this option, and the gargantuan quantity of karma points I could achieve, then decided it was not yet my time to leave this earth so asked my good buddy if he had any other ideas. He pondered it for a moment, then calculated we could achive nearly the same effect (if not the heroic drama) if Mr. Jellybean drove the car up on the curb. Mr. Jellybean did just that and Tony easily removed the fridge door, and tucked it under his arm. The Jellybeans bid us adieu and thanked us for our efforts, but it’s all in a day’s work for Karma Kings such as ourselves. 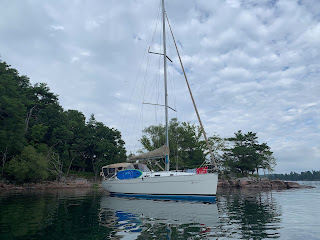 Tony asked if we could keep the fridge door as a memento of the experience and I said, “Sure, if you’re willling to store it in your cabin.” So we said goodbye to the fridge door as he flung it into a nearby bush, where it would serve as a nice home for a local chipmunk or mouse family.

After all that excitement we decided it was time for a drink so we wandered over to the main street and found several promising options, but settled on a Thai restaurant, sat down at a table on the outside patio beneath an umbrella, and ordered up two rum and cokes. Our server returned almost immediatley with two of the most magnificently presented rum and cokes I have ever seen. We were each presented with a fine serving tray, and on it carefully placed was an extra large shot glass of dark rum, an ornate glass full of cubed ice, a sparking tumbler, a juicy wedge of lemon, a chilled can of Coke in a bright red can, and an unmistakable aura of love and attention enrobing the entire presentation. We felt like kings and were sure glad we ordered this instead of a couple of bottles of boring domestic beer.

We each carefully assembled the various ingredients into our tumblers, then raised them for a satisfying clink and a toast to our good fortunes, and had our first sip. Heavenly!

The ladies arrived shortly after this and we ordered up a delicious Thai lunch, which was not quite as magically curated as the rum and cokes, but very good nonetheless. Ana hadn’t found much in the stores, but is always happy for a little retail therapy in whatever form. Although we do enjoy the time we spend on the water sailing and anchoring out, we seem to always have the most fun and adventures when we visit towns and marinas, so this is an integral part of “the boat trip”.

There was a final bit of shopping after lunch then we all assembled back at SeaLight, cast off the lines, bid farewell to Gananoque, and headed back out into the lake. There are dozens of islands close to Gan so we reviewed the charts, had a look at the wind forecast, and then settled on the well-sheltered south-eastern bay of Thwartway, otherwise known as Leek Island. Because there were already six other boats here, the only available spot was to nestle into a small cove near the entrance, which didn’t have enough swinging room so we would have to employ the stern tree line tie-up method. I retrieved a 250 foot line from the anchor locker and handed it to Tony and Angela who loaded it and themselves into the dingy. Ana then dropped the anchor as I slowly reversed the boat into position and the Henriques navigated the dingy into shore, feeding out the huge line which was cleated on the stern of the boat, tended to by Stella. As we set the anchor, they snugged up the line and tied it to a giant pine tree, and voila, we were done! This method keeps the boat firmly in one position no matter how the winds and currents are behaving.

With that, we sat down in the cockpit to enjoy the view of this beautiful bay, the US shoreline to the south, and the impressive number of minks that were playing on shore and in the water. In fact, I’d never seen so many minks in my life - they kept popping out of the bush, appearing on the rocks out of nowhere, or we’d just spot a small wake in the water, followed up by a plop as the mink would dive underwater to scrounge up a snack. 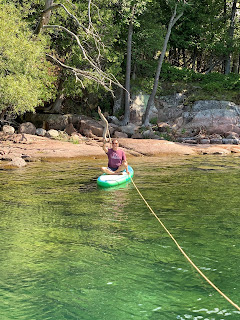 I took the paddleboard out for a nice long paddle around the bay and down the channel westward. The water was clear, calm, and by this time the skies had cleared and the sun had returned. It was shaping up to be a beautiful evening. After I returned, Tony took the board out for a long ride while I did some snorkeling with Stella and the ladies kept themselves busy on the boat chatting and putting together a lovely snack board. We all gathered up on deck for happy hour and snacks under the fading but still warm sun and enjoyed what I’d consider to be the second best moment of 2021!
Posted by Kristofor Olson at 8:37 AM