It’s the Bananas! The Damn Bananas! 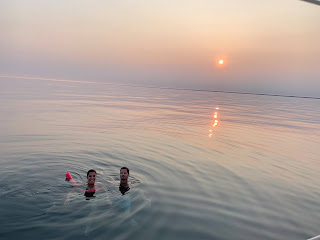 I woke up in severe pain resulting from yesterday’s mechanical maneuvers. My back was thrashed and arms and hands were covered in bruises and aching. I guess I just wasn’t cut out to be a diesel engine mechanic.

Andrew drove us back to the boat and we gave it one last go with a few new tools and ideas. I really felt like it was going to work. Along the way Stella said, “Dad, what if we get to the boat and find that the coupling just dropped off on its own overnight? Would you be happy or sad?”

“I’d be bloody overjoyed, but humiliated at the same time. That’s sort of how boating works sometimes.”

After torching it twice as long as yesterday, and applying fresh hammer force, the coupling remained firmly stuck. Andrew helped as much as he could, but it became clear it just wasn’t going to happen. He also helped us call every marine mechanic in Kingston, but they were either too busy or in the case of the marine mechanic working on site, was too freaked out by Covid to go on a boat that hadn’t sat empty for at least three days. They did all offer tips on how to get the job done though, but they were all things we’d tried already.

Andrew headed back into work and we went to the marina office to schedule the boat drop-in. The staff member handed us a bill for twice what we were quoted and we stood there in shock. Ana fought it out with the owner but she would not budge, saying that the original quote was based on them not having to undo the straps, but none of them thought to mention that at the time, otherwise we might have just put the boat back in the water. So we paid the $1400 and simply repeated the boaters favourite acronym: B.O.A.T. – Bring On Another Thousand.

As we were walking around the gravel yard, getting scorched by the sun and angry as hell, Ana the Garbage Picker spotted a discarded Napoleon bbq grill by the dumpster. After a cursory inspection revealed that the only real problem was the burner, I hoised it up on my shoulder like a prize and carried it back to the boat and stowed it in the cockpit locker.

“Sure,” replied Ana somewhat sarcastically, but I could tell she was a a little less mad now.

I rigged up a seal clamp that we could use to stop the flow of water when the boat was not underway, which would get us through to the end of the season when we could either have another go at it, find a diesel mechanic to do it, or maybe even find a two part shaft seal that didn’t require the disassembly for installation. In retrospect, this is what I should have done, but again, lesson learned. Always exhaust all inexpensive fixes before going for the expensive, complicated one.

As part of the haul out package, I had craftily negotiated a free pump out (which were probably free anyway…) so after they dropped SeaLight back in the water we motored over the the pump out stationa and left a load of sewage for them, which felt satisfying in a sick and vengeful sort of way. We then motored out of there as fast as possible and started trying to shake off the fact that we’d just spent the two most beautiful days of the trip on the hard. The healing process was continued by tossing out a whole bag of moldy buns, one by one, leaving a trail behind us all the way out of the bay. I was relieved to find that the boat was running perfectly fine – after all the beating and pounding I had been scared that we might have bent the prop shaft, which would have been a mega disaster, but thankfully she remained straight and true. 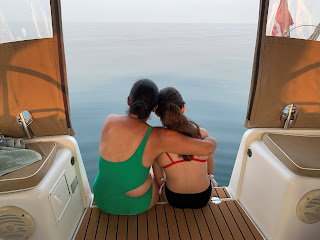 The further out into the lake we got, the better we started to feel. We originally thought we’d sail to Coburg to spend the night and explore the town, then then once we were on the open lake, we decided to do the big run all the way to Toronto and have some extra time there to relax. There was not a breath of wind and the lake was completely flat so after several hours on the water we stopped the boat and jumped in for a glorious swim. The water temperature was up to 25 degrees C, which is Ana’s minimum for lake swims. Stella wasn’t too excited with the 400 foot water depth, thinking there was possible risk of shark or sea monster attack, but she braved up and jumped in with us.

Once we were back underway, I was at the helm when I heard a cry from below.

“Well….remember when Angela and I went grocery shopping. We bought bananas and I meant to get rid of them but forgot.”

“Well goddamn it, no wonder we had so much friggin trouble. Get rid of them!”

Stella flung those evil bananas as far as she could then washed her hands thoroughly while Ana sanitized every surface the bananas had touched. You see, bananas are banned from boats because they bring awful luck. Every time we’ve had boat disasters, there’s been a banana involved. I was overjoyed to know that this recent misfortune had nothing to do with my deficient decision making and instead was caused entirely by the goddamn bananas.

Banana-free, we motored across this great lake and into the night.

Posted by Kristofor Olson at 7:54 AM