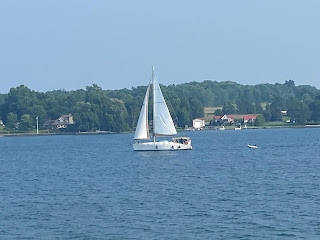 You know what’s nice? Waking up and having a nice freshly brewed coffee. You know what’s really nice? Drinking that coffee on a beautiful deck of a beautiful house overlooking the beautiful St. Lawrence River. We had a lovely long chat with Andrew and Vic, catching up on recent events and bitching a fair bit about how a year and a half of Covid and four years of the orange clown to the south has turned so many people into utter idiots. Once we got that out of our sytem we got back to the poo jokes and things felt normal and happy again.

Sadly, our hosts had to head into work so the three of dingy’d back to SeaLight and had a nice big breakfast, than sailed her back across the bay and anchored in front of Andrew’s place. The wind was much lighter now so it was safe to anchor. I went for a swim and hooked on the mask and snorkel to go and chase perch around for a while while the ladies lounged in the cockpit. I couldn’t help but to swim over to dock area to get a close up view of the bottom, and it was no wonder we hit a rock as there were dozens of them scattered across the ground, but I couldn’t find any with a blue bottom paint stain so we must not have whacked it hard enough.

Shortly after noon, our friends Angela and Tony arrived, yay! We don’t go anywhere without them, which presented a bit of a logistial challenge this year as they too had sold their boat at the end of last season but had decided to try land yachting this year (hint…think RV). Fortunately they agreed to sign on as crew for SeaLight so we’d all be traveling in the same vessel this time around.

We hooked them up with arrival bevvies in the cockpit, them moved back to the upper dock lounge when Andrew and Vic returned from work. There, we drank beer and smoked cigars and all was good with the world. But soon, it was time to go.

We set the sails on SeaLight and began our slow ride eastward down the Bateau Channel. The ride was smooth, slow, and relaxing as we passed such a diverse array of housing along the way – many multi-million dollar mansions, small family cottages, camp sites, and even waterfront trailer parks. Something for everybody. 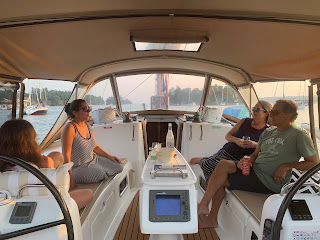 The Admiralty Islands is the name given to the first island group in the Thousand Islands chain, which really starts at Gananoque and reaches as far east as Brockville. We threaded our way through the channels and many boats that were already anchored in the area and found a suitable spot just west of Lindsay Islands. By “suitable” I mean the only spot we could squeak into that didn’t already have a bot – there must have been 30 to 40 boats in the anchorage, which is one of the downsides of visiting a beautiful and accessible cruising ground in the height of the summer season.

The five of us gathered in the cockpit for happy hour then enjoyed dinner and conversation into the evening. As the sun dropped and day was replaced by night, a menagerie of twinkling lights appeared from the tops of masts, from cockpits, from cell phones, and from the odd camera flash of cruisers trying to capture that special memory. But despite the potential for a massive boat party, it was very quiet in the anchorage. Our first night together in the Thousand Islands.

Posted by Kristofor Olson at 7:20 AM