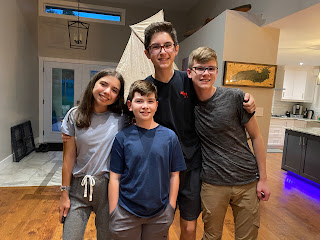 The rain and gloom forecasted for today arrived right on time. After a lengthy coffee session with Andrew and Victoria we drove into downtown Kingston to meet Marty and gang for breakfast at the Four Points Sheraton where they were staying, then we went for a walk downtown and avoided the intermittent showers by ducking into shops. In a moment of complete misdirection I bought a pair of $90 boating shoes, which were marked down from an even higher price. My bar for shopping value is high as the majority of my fashions come from Value Village or consignment stores thanks to my good lady wife who is constantly on the search for deals. But this purchase used up five years worth of footwear budget so I’ll likely be wearing them all winter too.

The day passed entirely too quickly, as it always does when we are here. We all assembled back at Andrew’s in the afternoon and visited, goofed around, drank beer, told stories, and smoked a big prime rib and a few racks of ribs in his smoker, which turned out magnificently. At some point during the day their neighbour Bob fired up his chopper and buzzed us in the yard. I thought it would be cool to leap up, grab onto one of the skids, and go flying through the air like an action movie hero. I’d then climb heroically into the cockpit, punch Bob in the face, throw him out into the lake far below, then pilot the bird back to Andrews and land it on the dock, to my cheering and adoring family who would shower me with confetti and gummy worms as I raised my arms in victory then took them all for helicopter rides. But all that seemed like it might be bad for my back so instead I just took a photo and waved to Bob.

Towards the end of the night, Andrew decided to demonstrate one of his home automation features. Every time we visit there is a new piece of technology in his house: auto-tinting glass on the front door, automated blinds throughout the house, voice controlled temperature and stereo, high resolution and motion activitated security cameras. One feels very much like Captain Jean-Luc Picard on the bridge of the Enterprise, without the tight-fitting bodysuit.

After dinner, most of us were at  the dining room table and Magnus was at the sink running the tap to rinse off some dishes. Andrew grabbed his phone and said, “Watch this.” As Magnus turned off the tap and began to walk away, Andrew pressed the screen and the tap came back on. Magnus heard the water running, looked a bit confused, then went back and turned off the tap. As he walked away Andrew turned it on again, totally confusing the boy. This ruse held up for at least four rounds until Magnus finally noticed us laughing wildly, flipped us the bird, and seeked safety from further embarrassment by joining his cousins playing Mario Cart on the giant screen in the lower level.

“The money I spent on those just paid for itself right now!” Andrew replied, with Marty nodding in agreement. 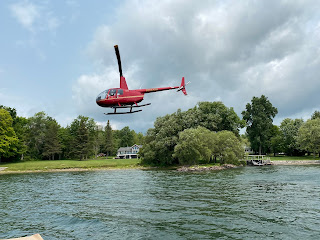 We said goodbye to Marty and Jen and the boys at the end of the night as they had to head home early the next day, which was holiday Monday of the August long weekend, which really sucked as the weather forecast was finally looking decent. We said goodbye and I really hoped we’d be able to get together again soon.

With that, we too packed it in for the night and had a beautiful dingy ride back to the boat. The wind had died, the clouds had disappeared, the moon was bright and beaming, and the moonlight shone down upon SeaLight, guiding our path.

Posted by Kristofor Olson at 7:33 AM