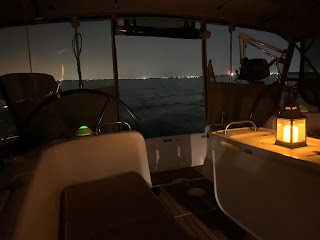 The sunlight was faltering and the weeds reached up hungrily from the bottom of the marina as SeaLight slowly pulled away from the dock. We were racing to depart while there was still sunlight, and ended up leaving at the worst possible time – when there seems to be enough light to navigate the narrow channels of the marina, but there actually isn’t and you’re moving blind.

I misjudged the turn into the channel and narrowly missed scraping SeaLight’s sides against the anchors protruding from the bows of boats on the next dock over, with inches to spare. We squeaked back into the main channel where we then faced our next challenge – the underwater weeds, which began winding themselves up on our prop mercilessly. Because our boat needs over six feet of water to float, and the depth of the water in the channel in some spots is just under six feet, I need to keep our speed up to push the keel through the muck. So I gave her extra throttle, which barely made a difference in our speed as the weeds just wound tighter and tighter around the prop making it difficult to accelerate.

After a laborious mile or two we made it out of the marina and into the open water. I put the boat into neutral, then shifted into reverse and gave it a hard thrust to spin the weeds off the prop, which usually results in a small island’s worth of greenery floating up to the surface, but since it was now dark I couldn’t see anything, so I assumed they were off and we continued east, pointed directly for the south end of Prince Edward County, where we would round the corner then head north-east up to our buddy Andrew’s place near Kingston, for a total trip length of nearly 130 nautical miles (230 kilometers). The wind had dropped to zero so this was going to be a motorboat ride. As we settled into the long trip with the auto-pilot engaged, something in the back of my mind was bugging me. It seemed like the RPMs on the engine were too high for the speed we were doing. But since we had barely used the boat yet, I didn’t know for sure how the engine should sound or run at this speed, unlike our old boat which I knew intimately. Deciding to ignore my gut at my peril, the peril did indeed arrive about half an hour later. Ana and I were relaxing in the cockpit when all of a sudden from down below Stella says, “What is that horrible smell?” I went down below and a grey cloud of smoke was pouring from the engine room so I yelled at Ana to kill it.

Here we go, I thought. We always have at least one major problem on a major sailing trip on the Great Lakes – you just don’t expect it to happen so damn soon. I opened the engine access compartments, put the headlight flashlight on, grabbed some screwdrivers and sockets and started trying to figure out what the hell had happened. I checked belts, hoses, thru-hulls, the exhaust system, the oil, the transmission fluid, the coolant, the filters, but everything seemed perfectly fine and I couldn’t figure out where the smell was coming from. Covered in sweat and grease, I was about to start some drastic and desperate measures when I thought I better try the simple fix first. We started up the engine and put it into reverse then gave it a hard spin. We still couldn’t see any weeds coming up, but when I put it back into forward gear and brought her up to speed, the RPMs were much lower and the engine and handling felt better. That was it, the goddamn marina weeds!

I cleaned myself up, reset the auto-pilot, then Ana, Stella and I sat nervously in the cockpit for an hour waiting for something bad to happen…but it didn’t. The visions of having to call the coast guard to get shamefully towed back into harbour, then spend several days begging mechanics to fix our boat began to fade and we could finally relax and enjoy the night sail across this giant freshwater ocean.

Posted by Kristofor Olson at 4:47 PM