The Secret Tunnel of Brockville 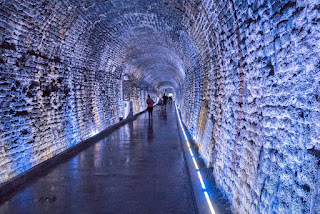 The poor weather that started yesterday continued into today and we awoke to grey skies and rain. And the forecast didn’t look great. Despite the cool morning, I put on my shorts and jumped on the paddleboard for an early morning lake bath.

Once the crew was woke, showered, and fed we motored into Gilbert’s marina in Brockville to top up the water tanks and drop off the ladies for a shopping expedition. Tony and I then motored back out to the closest anchorage we could find – Skelton Island and got SeaLight securely anchored before heading back to shore for our own non-retail explorations.

We got drenched from the rain and waves during our short dingy ride to the marina. We tied up then proceeded to the dockmaster’s office, where we found a most unusual set of tools lying in the corner: a huge cutting saw, a chainsaw, a jackhammer, steel pry bars, and an axe or two. We theorized the following:

“Dainty Sailor, what length of boat are you? Over.”

“Uh, what do you charge per foot? Over.”

“Two dollars and fifty cents per foot. Over.”

Shortly after the captain of Dainty Sailor gets tied up and pays dockage for his vessel, the dockmaster and his helper go out to the slip with a measuring tape and the crate of aforementioned demolition tools.

“Hmmm. According to this measuring tape Dainty Sailor is 37 feet long. But he only paid for a 34. So let’s make it a 34! Fire up the chainsaw!”

When the thrifty captain returns to his boat he finds the first three feet of his boat sliced off and the rest of it sinking slowly with the dockmaster and his mate leaning up against a tree, brandishing their weaponized tools, winking at the captain and offering a double thumbs up.

Not that the honorable captain of SeaLight would ever lie about the length of her to save a few bucks, but In retrospect, I feel rather happy they had no space here and we’re safely at anchor.

With the ladies nowhere in site, we walk a short distance over to the Brockville Railway

Tunnel, a place I’d never heard of, but one I’ll be telling everybody about. Canada’s first underground railway tunnel opened for business in 1860 and was used extensively in fueling the growth of this nation and then eventually fell into disrepair and was decomissioned in the 1970’s. Fortunately, the structure was rehabilitated and reopened as a pedestrian tunnel and tourist attraction in 2017. The tunnel is half a kilometer long and features some amazing geological curiosities, all highlighted by constantly colour-shifting LED lighting. It is truly one of the coolest things I’ve seen in Ontario and definitely worth the visit.

After exploring the tunnel Tony and I hustled through the rain and found two nice bar stools at Moose McGuire’s pub in the downtown core where we moved onto our second activity of the day - exploring local brews. The bar was totally hokey, with all sorts of Canadiana kitch hanging off the walls – moose heads, elk antlers, racoon tails, hockey jerseys, canoes, and, of couse, a bunch of televisions showing hockey replays and, later, some kind of online hockey video game championship which was just mesmerizing in its stupidity.

The ladies took a break from their shopping extravanagza and joined us for lunch. They each displayed their purchased wares in turn and Tony and I politely clapped. Lunch was unspectacularly typical for such a standard-issue sports pub, but it was certainly filling and laden with calories to fuel our vacationing bodies. By that time, we’d seen enough of the town so the boys dingy’d back to SeaLight for rum and cokes while the ladies continued their retal therapy.

When the ladies were ready to return, they rang up the Uber Dingy Hotline and Tony and I took turns retrieving them. Tony discovered that if you were running the dingy solo, and maxed out the throttle, and moved forward to the bow, that little 4 horsepower Mercury engine could indeed get her up on plane, resuliting in blistering fast speeds, but a total lack of control because you couldn’t reach the handle from there, unless you used your foot, which turned out to be quite fun.

During my run back to shore, I spotted a man and his two kids in a small sailboat struggling with its engine so I did my good deed of the day and towed them back in to the marina. On the water, karma rules, and you do everything you can to help other boaters, as your own next breakdown is never far around the corner.

The day finished with a cool swim, a hot meal, and an onboard fashion show by Stella, proudly showcasing her fabulous new fashions.

Posted by Kristofor Olson at 6:44 AM