A Power Weekend in Montreal - Saturday 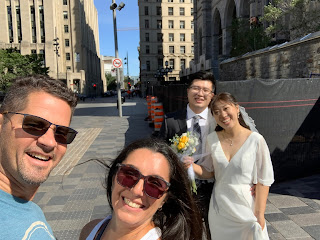 I wake up first, but Ana is out of bed before me anxious to get going. On vacations, Ana replaces her regular 90-minute morning routine of plucking, picking, clothes-selecting, scrubbing, grooming, hair-drying, and mirror-posing with an ultra-efficient and highly compressed procedure that spans less than 20 minutes, but she comes out just as stunning as ever.

Early morning Montreal is beautiful and this is my favourite time to explore a city – before she wakes up. We are on the hunt for just the right breakfast place, so we start walking, passing by so many impressive buildings, with copper roofs and architectural details you just can’t find anywhere else…except for every city in Europe. In fact, if you dropped an unsuspecting tourist in the middle of Montreal, their first guess would likely be that they were in fact in Paris, or Brussels, or Vienna, or some other European city. We see sculptures, cobblestone streets, fountains, pedestrian-only streets, and public seating everywhere, but very, very few vehicles. I am so intrigued by the sheer number of outdoor lounging spots, that I start taking photos of each one. Where we live, politicians don’t like providing public seating or public washrooms because they think it will only invite homeless people and make their lives more comfortable. Well, what the hell is wrong with that? What they fail to realize is that this is what make a city great; when it is built for people instead of cars. Great downtown public spaces attract people, which attract more businesses to serve them, and events to excite them, which brings more people, and before long you have an amazing, interesting, fun, and livable downtown that is necessarily hostile to vehicular traffic. That’s the place I want to be – not in a place that builds parking garages and makes homeless people sleep on the pavement. 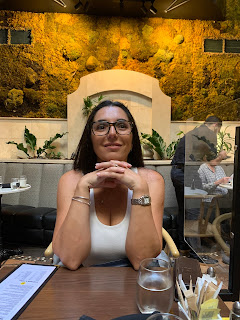 We find a boutique hotel with a great menu and a stunning eating area with a backdrop of live moss on the wall, covered alcoves, exposed brick and stone, and here we enjoy a delicious meal while we dream more about the future and relish the present. Despite no longer being a coffee drinker, I do sometimes concede and have an Americano when the situation deserves it, and this morning was one of those times. I realize now that I enjoy coffee a thousand times more when I only consume it sporadically, in amazing places, with wonderful people, instead of relying on it daily to fuel a caffeine addiction.

With breakfast literally under our belts, we continue our ground exploration by walking through the port area, where we find a huge raised boardwalk with outdoor poster boards explaining the history of shipping in Montreal, a large expanse of natural gardens, an outdoor piano to play, composite lounge chairs from which to look out on the St. Lawrence River, and an art gallery featuring a Salvador Dali exhibit. We are tempted to visit, but we have an awful lot to get to today, so decide to continue our wanderings instead and save it for the next visit. 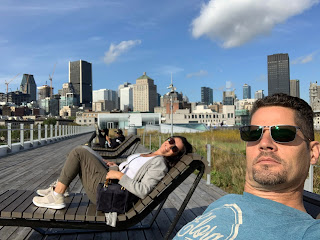 Our path takes us along the riverfront and we find a groovy farmers market, a high end spa called Bota Bota which looks to be built out of an old ship, a small marina, and a series of people walking around with baguettes under their arm and pastry remnants on their fingers. The day is now heating up and as we turn back into the streets of Old Montreal, we find ever more people appearing, including small packs of tourists being led on walking tours by guides. We visit an art gallery and meet the captivating owner who has Portuguese roots and exchanges business cards with Ana for possible future collaboration. We browse through several small boutiques selling fancy boots, antiques, hand made soaps, and a tourist one selling moccasins, beaver hats, maple syrup, and all the regular Canadian merch tourists lap up greedily. We run into a newly wedded couple, smiling widely with a photographer in tow, and pull them in for a selfie with us to celebrate their special day (and ours that happened 20 years ago!) 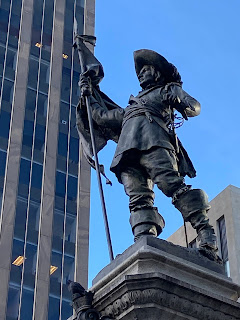 Chinatown is next, and Ana finds a shop full of gadgetry and trinkets the kids love so she shops while I stand outside and watch the goings on, still amazed at the huge range of free and durable outdoor public seating we’ve seen so far this morning. Benches, concrete tables and chairs, seating built into streetside window recesses, colourful composite chairs, concrete steps leading up to a shop where the owner has placed comfy orange cushions for anybody to use, wooden benches, seats around planters, garden swings on a built beach in front of a church, public sculptures doubling as seating, swings on playsets, picnic tables, and oversized window ledges. I stand and watch a duet of wooden seats and within the space of 15 minutes I see three different couples use it. I think I might need to write a blog just on this topic of public seating. 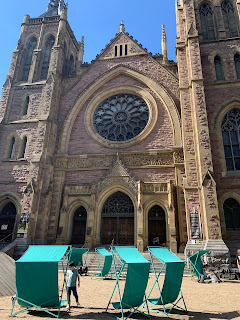 Ana returns and I point out a sign in front of a shop saying “Foot massage!” Now the last time I visited a Chinatown (in Toronto) unattended and went for a massage, I received an unsolicited offer of a sexual procedure that didn’t exactly jive with my concept of monogamy. So I’m always careful to run these ideas by my wife now as she considers me to be rather naïve and needlessly trustworthy in certain situations. 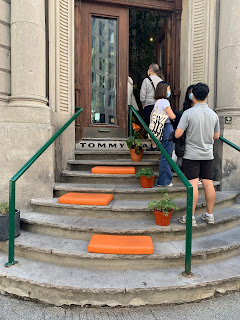 “Do you they will try to jack me off after a foot massage?” I ask her, curiously.

“I’m not sure how they do things in Montreal,” she replies. “But this is Solid Gold land so who knows?”

Montreal is famous for its strip clubs, with Solid Gold being one of the most enduring and famous of them all, and during our wanderings last night we did see a lot of late night adult entertainment venues. But this place looked pretty harmless so I went in for my Foot Massage Only while Ana head back to St. Catherine Street for retail shopping opportunities and we agree to meet up later.

After speaking with the owner and looking through the menu board, I super-sized the treatment and received both a foot massage and back massage which were very relaxing and accompanied by tranquil nature music, dim lighting and, most importantly, no illicit offers. When my 60 minutes were up, they charged up my credit card then marched me downstairs and thrust me out into the bright daylight. I staggered around blind and dopey, looking much like those post hibernation gophers that mosey out of their holes in the spring, and wander cluelessly into the highway where they get smoked by Mac trucks. 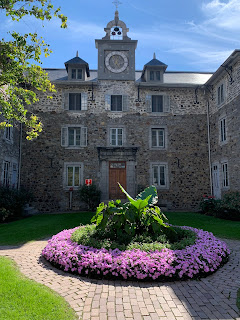 We met at a café on St. Catherine street and ordered a couple of take away paninis, followed up by McDonalds ice cream cones. While at the café waiting for our sandwiches to be constructed, I felt a purple presence calling to me from the floor so I looked down to find an abandoned ten dollar bill. I reached down, picked it up, looked around suspiciously at the other patrons, waved it around a bit, then stuffed it in my pocket. There is no feeling quite like finding money.

As the day was heating up we slipped back to the hotel for a wardrobe change (shorts) then continue our wanderings, which included more retail shops for Ana and I found myself a super bueno record shop called Cheap Thrills and spent a good while in there browsing the vinyl and may have picked up a special record as a special Christmas gift for a special someone (Magnus. He never reads these blogs so there’s no chance of the surprise being spoiled.)

We burned away the afternoon by walking, wandering, and exploring and the phone told me we had already clocked 20 kilometres before dinner. After another wardrobe change into fancy duds and ten minutes of lying prone on the bed giving the back a rest, we were back up and out and headed to Old Montreal to try out a Portuguese restaurant we had noticed earlier in the day, called Porto du Mar. It was housed in an ancient building and as soon as we walked in we knew it was going to be good – small, dim lighting, ancient furniture, enticing smells, and a single Portuguese man working in the kitchen crafting the dishes. 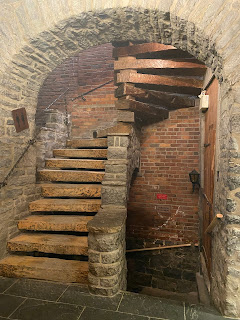 It was literally the best restaurant meal we’d had in years. We stayed for a very long time, savouring the food, relishing the atmosphere, and talking to each other, eye to eye, with no distractions, and nowhere to be. For me, the memories began flooding back of us as a young, fresh couple, with kids and responsibilities far into our future, exploring the world and each other, loving life, taking chances, getting crazy, and being in love. And here we were doing it all again, after two kids, nearly two decades in the rat race, so many wins and losses, and so much growing up. I am madly in love with my wife. 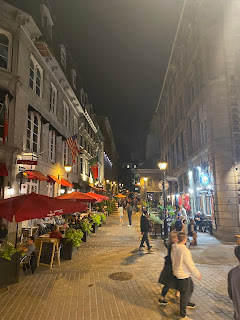 The Montreal night was calling, and we were not yet finished with her so we set back out into the night, and the night was alive with Saturday – well-dressed people everywhere, bars and restaurants chock-a-block, street performers, food smells, excited hollering from party-goers, antics, and so many fancy women wearing stiletto heels doing the wobbly walk across cobblestones, one perfectly spaced crack away from going arse over teakettle. We found ourselves in a narrow, ancient alley with flowers strung from side to side and a series of stone buildings housing boutique shops. And endless stream of people, going nowhere in particular, passed through, and they were all simultaneously consuming and supplementing the energy of the warm Montreal night, just like us. As I sat on a bench watching all these wonderful people, I did an experiment. As people passed instead of just glancing at them rapidly, moving from person to person, I’d look at one person in the group and hold their gaze for just a little longer than normal. When they noticed, our eyes would lock, and I could see them struggling to figure out who I was, thinking we must know each other. I’d then just smile and nod, and they would do the same. Some would even say, “Hello!” or “Bon soir!” One man stopped in his tracks, came up to me, and asked if I could take a photo of him and his girlfriend, which I did, and they told me they were Algerian students enrolled in university here. It was a rather thrilling experiment, as I realized I never take the time to really look at people, in my rush to do whatever I am usually doing. 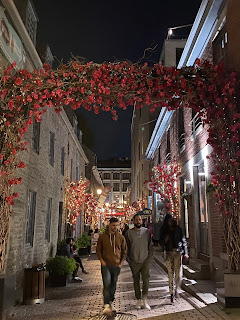 We returned to the hotel utterly spent after walking a marathon distance and my last thought before falling asleep was how fortunate we are to be alive and living our best life.
Posted by Kristofor Olson at 7:12 AM