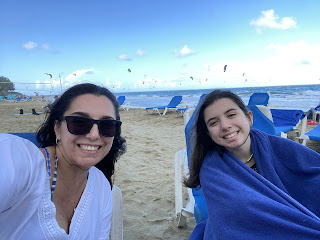 When vacationing at an all-inclusive resort, Walking Club meets at 7am every morning on the beach. Sometimes it’s just me, sometimes there’s one or two more, depending on who I can cajole into joining me. It is the best time of the day, as there’s enough light to see, but the sun isn’t up yet, so you get this hazy pre-morning atmosphere that is warm but not hot and perfect for walking. For the first Walking Club of the trip it was just me, and I started from the western end of Cabarete Beach where the hotel was located and walked east along the horseshoe shaped bay. The surf was large and crashing and the wind strong, but the further east I walked, the less frenzied the ocean became, and when it hit my risk tolerance level, I threw off my shirt and jumped in for my first ocean dip. Glorious. This is the moment I dream about every year, plunging into that salty, warm ocean water, then bobbing to the surface and floating there on my back, listening to the surf, feeling the water washing over me, and tasting the salt on my lips. There’s something about the ocean water that makes me feel fulfilled, and connected, and present. I love it.

I returned to the room, collected my people, then we headed down to the restaurant area for our first breakfast, which was delicious, with many selections, and outstanding croissants. As we ate, the kids noticed a resort cat prowling around the floor, snapping up dropped morsels, then saw another one perched on the roof overlooking the diners, perhaps enjoying tasty gutter snacks.

With breakfast concluded, the retail mission was on. Ana loves nothing more than a retail mission, and a missing luggage provided an urgent shopping necessity indeed. We walked out the front entrance of the resort and set out walking down the busy main street and were passed by smelly two-stroke motorbikes, dump trucks, construction trucks, busses, beaten-up cars, all spewing clouds of gasoline and diesel vapours into the roadway and lungs of the many locals and tourists walking along the sidewalk trails alongside the roadway. We found an ATM and withdrew a nice wad of Dominican pesos at a rate of about 41 to 1.

After finding one beachwear store where the cheapest suit was $75 US dollars, the girls zeroed-in on a second hand clothing store and descended into a crazed shopping frenzy, like deranged and ravenous Great Whites ripping apart a whale. For our own safety, Magnus and I skedaddled out of there and across the street to a coffee shop where we enjoyed some drinks and chatted until the ladies exhausted themselves and the store’s inventory. After this, Stella’s mood was much improved.

From here we continued walking and soon reached the commercial center of town. It had been at least 20 years since Ana and I had been to Cabarete, and it really didn’t seem to have changed much at all. There were shops selling touristy trinkets, some selling surf wear and gear, small grocery stores, booze shops, restaurants, an ice cream stand, some banks, fruit vendors, and a lot of locals and tourists coming and going. Despite the road running parallel to the beach, the solid stretch of buildings made it impossible to see the ocean, other than quick glimpses through the shops with all glass front and backs, or the occasional pedestrian walkway. We found a few more clothing items for Stella, Magnus bought some trinkets, Ana bought jewelry, and I picked up two cigars. Retail mission accomplished!

We cut through one of the walkways to the beach and the world transformed. In place of loud motorcycles was the loud surf crashing up on the beach. Instead of shops selling trinkets, there was an army of vendors carrying wooden cases full of them, approaching each and every tourist trying to sell them a bracelet, or necklace, or box of cigars. And instead of an endless array of commercial buildings, there was an expansive and beautiful ocean before us, with the high winds building up large waves and crashing surf. Diesel vapours were replaced with moist salty air, cracked pavement replaced with soft sand, and instead of blaring car stereos were speakers from the many beach restaurants cranking out the latest Dominican bachata hits and salsa classics. Man, I love Latino land.

We walked back along the beach and soon the restaurants thinned out and were replaced by larger hotels, and in one case, just the abandoned and slightly creepy foundation of a long-ago demolished building, made even scarier by a blasted hole in the high foundation wall leading into darkness, and large enough to walk into, with ominous Spanish words sprayed on the moldy concrete. 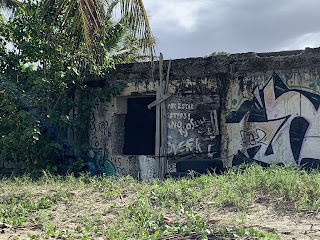 “Hey Dad,” Magnus said. “I bet I can guess what those Spanish words translate into.”

We arrived back at the hotel just in time for lunch, where we continued our first day stomach expansion, then the kids returned to the room to relax while Ana and I attended the Sunwing orientation session at 2 pm, which was mostly useless and confusing, but we did find out that Stella would be receiving compensation for the delayed bag. By mid-afternoon the wind had picked up and as we walked onto the beach we realized why Cabarete is called the kite surfing capital of the world – by my rough estimation there were 150 kite surfers tearing through the bay, cutting through the surf, and doing giant leaps off waves then slowly parachuting down with many seconds of hang time. What a spectacle! Especially since the last time we were here, the sport of kite surfing didn’t yet exist, and the bay was full of windsurfers and Hobie Cats. Now, there was not a single sailboard to be seen – it was all kites.

Despite the large and dangerous crashing waves, Stella and I decided to go for an ocean swim, which was less a swim, and more of a game of chicken with the unstoppable cresting waves, which refused to chicken out, and enveloped us and rolled us upside down, sideways, backwards, and forwards across the fortunately sandy bottom, resulting in sand rash, inhaled ocean water, and sand-laden crotches of swimsuits. It was great fun, so much so that Ana even joined us for some aquatic punishment.

We returned to the room for human crevice sand identification and removal, then a chill-out session on our balcony where I enjoyed a fine dark Maduro robusto cigar and a cold Presidente while listening to Bob Marley on the speaker and watching the guests and staff walking back and forth along the pathways. Moments like this are when I achieve a sense of stillness on these trips, so I relish and remember them. 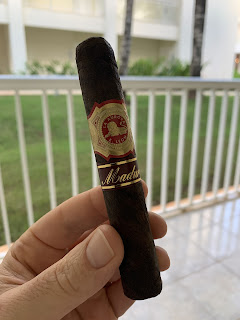 Buffet dinner was excellent, but we did not stay out for any later evening activities as we were wiped from a full day in the sun so I was asleep before 10 and I don’t know what happened after that.
Posted by Kristofor Olson at 8:23 AM