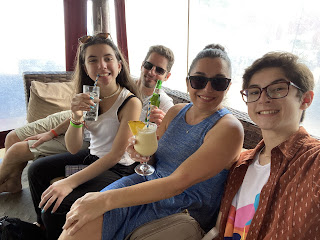 Walking Club was slightly delayed as it was pouring outside at 7, but by 8 Ana, Stella and I were walking the beach, amidst intermittent gentle showers, while Magnus the schedule-challenged teenager slumbered. Stella was hoping to find some shells, but there were few signs of life along the beach – no shells, no jellyfish, no perished fish, no crabs, and not even any shore birds. Really, the only living things were a few vagabond beach dogs, one which we recognized from the night before, as Magnus had struck a friendship with it and named him Hernando.

After breakfast we set up shop beside the pool and Stella produced a Sunwing beach ball she had been given on the airplane. It didn’t take long for a few kids to join our pool game of “keep it up” and soon we had overtaken the centre area of the pool with the competitors. A new chatty kid entered the game, and introduced himself to me as Ethan but I nicknamed him The Hammer as his contacts with the ball were vigorous, powerful, and completely directionless. And sometimes he would grab the ball, run around on the deck a bit, then launch himself into the water, laughing wildly, as he hammered the ball haphazardly and belly-flopped, or back-flopped, or face-flopped into the water while the rest of us took turns retrieving the ball from the far reaches of the pool. He took a liking to me and cozied up to me in the pool, then told me his life story which he summarized in about five rapid sentences: he’s from the Bronx, has younger twin brothers, and he suspects his mom might have been born somewhere else as she speaks great Spanish.

During lunch, Ana noticed that we hadn’t seen a single gecko or lizard yet, which was surprising as they are normally stuck all over the walls and ceilings at these resorts. And they are so much fun to use as targets for spitballs.

“Let’s ask the waiter what happened to all the geckos,” I said. “How do you say gecko in Spanish?”

As one of the waiters came by, Ana grabbed his attention and asked him in Spanish, “Excuse me, what happened to all the legatos that are usually on the walls?”

He looked at her confused and said, “What?”

“Legatos. Lizards. Geckos,” Ana said as she pointed at the walls and ceilings, and the waiter’s eyes followed her fingers, but was just not getting it, then he said something in Spanish like, “Senora, whatever word you are saying, that lady over there knows all about it, just ask her,” and then he pointed to the hostess.

“She is the legato expert?” Ana asked.

“Si, si, si,” the waiter replied then hightailed it out of the dining area.

Another waiter came by so Ana, never one to give up, tried again.

“Senor, what happened to all the legatos?”

“Ahhh, legatos. Si. Well, since Covid there’s been many fewer of them. Very suspicious. I think something funny’s going on,” he said, shaking his head, with a look of paranoia in his eyes. The pandemic conspiracy theories ran far deeper than I expected. Perhaps Bill Gates and his Illuminati had it in for the geckos of the world too. 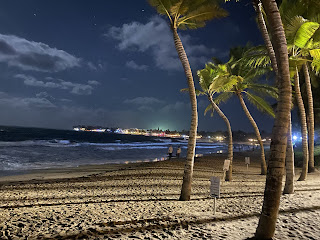 We spent the day alternating between beach and pool, playing cards, telling the kids some old travel stories, and soaking up the beautiful sunshine. As promised, the Sunwing rep produced a credit card loaded with $150 compensation for the lost bag, and the bag itself showed up late in the afternoon, after being discovered in Toronto and sent out on an Air Canada flight. Stella was overjoyed, and showed up at our Mexican a la carte meal wearing a dashing outfit and a huge smile. The meal itself was voluminous, delicious, and opulent. After four courses of Mexican food, followed up with tequila shots, it was all we could do to limp back to the room, carrying the heavy load of our overburdened stomachs, and collapse on the bed.
Posted by Kristofor Olson at 9:03 AM