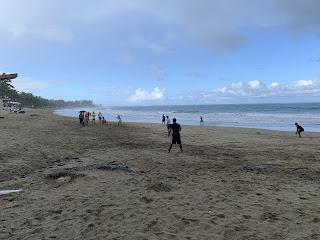 The rain began overnight and continued into the morning, so I enjoyed a rare sleep-in and Walking Club didn’t get going until close to 9 after the skies had cleared. Even at that departure time I couldn’t interest Magnus, so he hung around in the room while the rest of the walked, then we all met up for breakfast. The breakfast spread was excellent, as each day they had fresh papaya, cantaloupe, and watermelon, as well as yogurt, fresh croissants, then all the greasy fry-up staples such as omelets, several types of sausages, fried potatoes, and lastly, trays of waffles, pancakes, and French toast.

We played around in the pool and did some body surfing in the ocean, and somewhere along the way Stella lost her silver earrings, which bummed her out, but fortunately a new set of earrings was only a short walk away in one of the jewelry stores in town.

Yesterday, we had been approached by two hotel staff – Samwise and Carlos, and they had offered us a free lunch at one of their sister hotels, which was a higher end facility, in the hopes that we might consider booking our next trip there. Upon agreeing, they pulled out a booking form, wrote some information on it, then gave it to us. Look, we knew right away there were some ulterior motives here, which would probably require a time-share presentation or something like this (what did someone once say about there being no such thing as a free lunch?), but on these all-inclusive trips any chance we have to do something out of the ordinary is welcome.

We arrived at the Presidential Suites Lifestyle Cabarete hotel at 12:30 and entered the front door to find a large eating area with no sign of food or guests. A staff member suddenly appeared, asked for our voucher, then led us across the street to a different portion of the hotel and we were directed to a table near the fancy bar and offered a drink. So far so good. Then a slicked-up dude arrived, welcomed us, gave us a party sack which included a mickey of rum, a bottle of Mamajuana ingredients (Dominican’s version of aphrodisiac liquor), and some other trinkets. Then…the sales pitch. He told us all about the model which was absolutely not a time share, but was the next gen version, now called a Holiday Vacation Club where you pay an initial amount (from $25k to $350k) which gives you access to any of their properties in the DR, Mexico, or Dubai. They also allow you to rent out rooms to non-members for a premium over what the member would pay, allowing you to pocket the difference. The salesperson was likeable and pretty convincing, as these guys always are, but we made it pretty clear this was not for us, but we would like to see a room. He took us up to the three bedroom unit, which was simply stunning, as all bedrooms and living areas had ocean views, and it was very modern and spacious. There was one other couple there cornered on a couch getting the hard sales pitch from another salesman, but we kept standing, in fighting pose, as our guy tried again to convince us to at least buy some sort of trial package. We said no, but asked to see additional information or a contract, but we were told flatly that they did not provide any sales information and all deals had to be done on the spot, today, which screamed scam and red flags. We politely declined and hoped we’d then be directed to the restaurant, and he did accompany us to the restaurant, right through it, past the fancy pool and pool bar, then were heaved unceremoniously down a set of concrete stairs to the beach below like yesterday’s garbage. 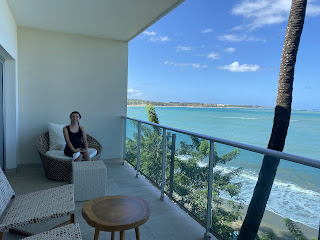 “What did you guys think?” I asked the kids.

“I think it was a great deal. I ran the numbers through my head and it makes a lot of sense,” said Magnus.

Stella didn’t have much to say, besides where were we going for lunch.

We had a great conversation all the way back about direct sales, multi-level marketing, our past experiences with these sorts of sales pitches, and how to recognize a scam. I found it the whole thing to be an irreplaceable learning opportunity for the kids, especially Magnus who is a natural salesmen, but also I think inclined to fall for these sorts of things, so exposure to high pressure sales in a safe environment with his parents was probably a good experience for both of them.

Lunch was had in the buffet, which fended off my family’s starvation after the phantom lunch invitation, then dinner was taken in the second of the hotel’s a la carte restaurants – the Asian Fusion. The rest of the day was spent by the pool, and Ana and I went for one more walk later in the day and were happy to come across a group of local kids who had struck up a big game of beach baseball. It was satisfying to see teenagers having fun with each other, being social, being goofy, and getting exercise instead of just standing there silently mesmerized by their phones, scrolling endlessly.

Posted by Kristofor Olson at 9:10 AM