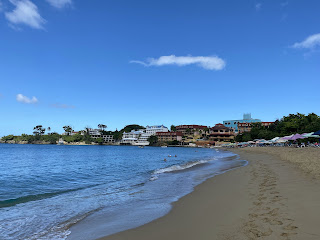 The morning was warm, windless and the nicest of the trip thus far, so Ana and I headed out at 7am for Walking Club after trying in vain to seduce Stella into joining us. We walked the entire length of the beach to the east, seeing a few of our favourite beach dogs along the way, and a number of people running up and down the beach. I’ve never been much of a runner; walking has always been my thing. Runners always have this look of extreme pain on their face – they never run past you wearing a blissful smile, like many walkers do. When runners do take a moment to look at you, panting, with bulging white eyes, I always get the feeling they are about to say Help, somebody just plunged a knife into my back! or I’ve been poisoned! That’s why I like to take my exercise long and slow.

To break the glorious relaxing monotony of the resort, we decided to take a trip to explore the nearby town of Sosua. We found a nice taxi fellow named Carlos outside the hotel and had a lovely conversation with him during the 15-minute ride. He told us all about the high vaccination rates in the Dominican Republic, low Covid numbers, the escalating price of gasoline, the political situation in Haiti, and we even recruited him to take us to some nearby waterfalls and a tour of Puerto Plata on Wednesday for a great price. As usual, the Spanish was coming back to Ana twice as fast as it was for me, but I was still hanging in there.

Carlos dropped us off near the main beach area and we were surprised to find a completely calm and sheltered bay with boats anchored offshore and no waves of any sort – such a drastic change from the perpetually crashing surf in Cabarete. After dodging half a dozen vendors trying to sell us banana boat rides, catamaran trips, beach chairs, glass bottom boat excursions, fresh fruit, and hair braiding, we found a great spot, spread our towels over the sand, extracted the masks and snorkels from the backpack, and within minutes the girls and I were in the water swimming out to the nearby reef while Magnus stood guard. It has become abundantly clear that Magnus is not a beach guy; he doesn’t like the sand, hates wearing sandals, and prefers to stay dry. I don’t know what family raised him like that. 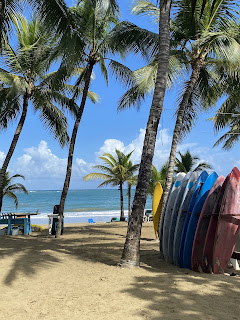 As expected, the coral reef was mostly dead, which is inevitable when you allow hundreds of inexperienced snorkelers every day to pummel, stand-upon, and remove items from the reef, but there was a surprisingly large quantity and variety of fish and the structure and size of the reef itself was impressive. When we returned, Ana and Magnus went for a beach walk while Stella and I alternated between lying on our towels getting baked by the hot sun, and dipping back into the cool and incredibly clear water. They returned with two tiny hermit crabs and some shells, which was more life than we’d found the entire time exploring Cabarete beach. After a few more swims, Stella and I did a beach walk to return the hermits to their home, and along the way found some nice pieces of sea glass in the sand.

Our sun-kissed skin was becoming sun-charred so we packed up our stuff and walked through the long stretch of shaded beach bars and restaurants, some consisting of rusted corrugated sheet-metal walls, some with thatch roofs, and others constructed of abandoned wood and various cast-off bits and pieces. What was relatively consistent between them was the abundance of odd couples – 65-year-old white European or American men with 18-year-old Dominican girls. I pointed this out to Stella and we had a discussion on the business of prostitution. She was shocked, and I think saddened. 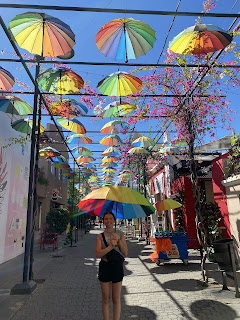 We found our way to the downtown area and wandered around for a long time before we were able to find a bank machine that would produce some pesos for us, and by that time we were starving so we found a table at Captain Bailees restaurant and had a lovely, long lunch, followed up with a haircut for me and a bit of shopping for Ana and the kids.

We tried to call Carlos to pick us up for the return trip, but he wasn’t answering his phone so we found a different taxi to take us back to the hotel, and there we laid low and recovered from our strenuous day trip.

Posted by Kristofor Olson at 9:18 AM