Swab Up the Nose 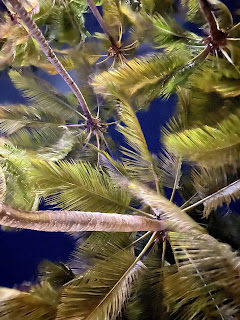 I was thinking that the listing of uplifting words and phrases painted on our hotel room wall might be changed up to have more of an impact. There’s no shortage of sources telling us to be more positive (lifestyle gurus), or to exercise more (Peleton ads), to eat healthy (cereal boxes), or to be nicer to people (The Wiggles). Instead, why not hit people right in the face with all the unproductive things they do that makes their lives miserable? Then, instead of going down the list saying to yourself Yep, I should do that, should do that more too, definitely don’t do much of that, and so on, the reaction might be, My God that’s me, why do I do that, no wonder I’m so depressed. Here’s a great listing of phrases to paint on your kitchen wall:

I was up early this morning to do some writing, then spun by the room to collect my peeps for Walking Club but they were out cold so I continued out on my own. And I found the answer to Magnus’s question to me from the previous night, which was Can the moon and the sun be visible in the sky at the same time?. As I walked, the brightly-lit moon was directly in front of me to the west, and it was not long before the morning sun appeared directly to the east, and as it rose in the sky strengthening, the moon slowly began to fade. I walked until the beach slimmed and turned into impassable rock then stopped, did some stretching, took a moment to close my eyes and appreciate the feel of the sand beneath my feet, the salty windy on my skin, and the music of the ocean. These moments which implant themselves firmly in my memory, are what I come back to during the depths of the Canadian winter. 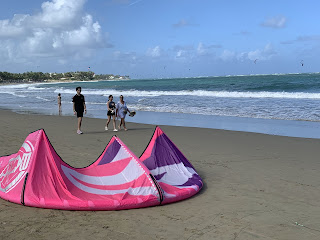 At 9am we showed up at the resort medical office for our PCR Covid tests, which are required to get back into Canada. The doctor took our payment then proceeded to ritualistically shove a swab up each of our eight nostrils to the point where it could go no further in, then gave it some twirls to stimulate the brain core a bit. When he did mine, my right leg started to spasm, and I could see he was pleased as the swab had definitely hit some cranial matter.

After the tests, we went online to attend a virtual funeral service streamed from the UK for our good friend Heinrich Richheimer. He was a career mentor to both Ana and I and had worked with us on several major projects when we lived and traveled overseas. It was an interesting coincidence that we happened to be in the Dominican Republic for this event, as Heinrich, Ana and I had spent so many evenings together in Santo Domingo enjoining wonderful dinners or just hanging out in our apartment. He was a great friend and we will miss him.

The rest of the day was highly relaxing, but quite void of adventure. We stationed ourselves on one of the dreamy four-post beach mattresses beside the pool and played cards, napped, read, jumped in the pool when we got hot, and watched the mosaic of kites flying in the bay as the riders cut through and leaped off waves. Stella and I finished up the afternoon by grabbing a couple of boogie boards and riding the waves. She got rocked and rolled by one wave so badly that her mask popped off and was lost in the swirling and sandy waters. 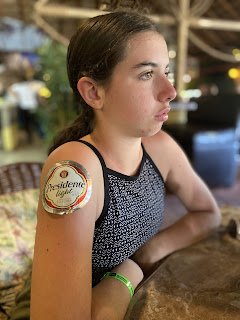 We had our third and final a la carte meal of the trip at the Italian restaurant La Vela. Determined to not consume twice as much food as we needed, we asked the waiter for advice, and he assured us that, because of the small portion sizes, we would need an appetizer, a pasta dish, a main course, and a dessert, then of course a basket of fresh bread. So we did. I knew I was in trouble when my appetizer arrived and it consisted of two sliced tomatoes, half a shredded lettuce, and a pound of sliced mozzarella cheese. We did our best and consumed as much as we could, but by the end it was all we could do to drag our overstuffed arses directly back to the room.
Posted by Kristofor Olson at 9:27 AM