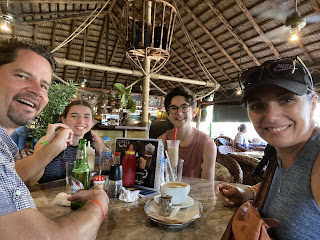 Our taxi driver Carlos arrived shortly after 8, and we were on our way to the Damajagua Falls.

We like to do day trips during these all-inclusive holidays as sitting on the same beach chair for hours per day can get tedious. Relaxing, but boring. During our day trip to Sosua we had arranged a deal with that taxi driver to pick us up today and take us to this very popular waterfall destination, and he was able to do it for half the price of what the resort charged for a similar trip.

By this time, the Spanish was really coming back for both Ana and I so we spent the 75 minute trip quizzing Carlos about the country and the progress it had made since we had last been here so many years ago. Based on the little we’d seen, we’d both felt that things had improved here substantially. For example, when we lived here there was litter scattered everywhere you went, the drivers were suicidal, long power blackouts happened every day, there were many brutally poor people on the streets begging for money, and most regular people seemed broke and a little desperate. But during this trip, we had seen very little sign of any of these things. Carlos told us that the current and previous governments had invested heavily in road improvements, the electrical grid, garbage collection and recycling, and many other areas, resulting in drastic improvements across many aspects of society. This was so exciting to hear. We lived here for nearly two years and loved it, but the country just had so many problems, and it seems like progress is so hard to make in poorer countries. If you look at Haiti, the Dominican’s neighbor to the west, located on the exact same island of Hispanola, it is a story of corruption, natural disasters, political anarchy, massive corruption, steady decline, and heartbreak. It’s hard to imagine two countries on the same island on such different paths.

We got a very small taste of the traffic misery we remembered from our days in Santo Domingo as we passed through a few busy areas of Puerto Plata. The gasoline fumes from all the black smoke emanating from lorry trucks, tankers, beaten-up cars, and motorbikes were pungent and penetrated the car and my mask, giving me a thankfully short but pounding headache. Once we exited the city, the air cleared and it was back to green countryside and manageable traffic.

The Damajagua Falls are a set of 27 waterfalls and pools linked together such that you can either jump or slide from pool to pool. Depending on the time of year and quantity of rainfall, the number of these that can be accessed varies. Our guide Danny told us that the full set of 27 hadn’t been open for several years due to scant rain, and today we would be able to access 7 of these. After gearing up with helmets, lifejackets, and water shoes, we did a 30 minute hike up some steep paths that left us huffing and puffing. Along the way Danny pointed out many different types of trees, such as guayaba, grapefruit, mandarin, and also a few clumps of gigantic termite homes stuck to trees they were in the process of attacking.

A three metre jump into the first pool got us off to an adrenaline-fueled start. We then slid, jumped, and swam our way through the remaining 6 pools, having a whale of a time, having never seen anything quite like this before. It is absolutely worth the trip if you ever find yourself on the north coast of the DR. 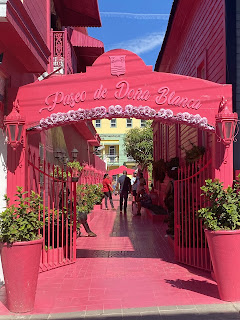 From here we returned to Puerto Plata and our driver took us to the city centre where there stands a huge cathedral and a wide open plaza ringed with restaurants, souvenir vendors, and other shops. We seemed to get lucky with our timing as there were very few tourists around so we practically had the place to ourselves.  We learned that a new cruise ship port called Taino Bay has just opened up the week before, which made it the second one in the area, after Amber Cove. With these sorts of massive investments it’s likely to place Puerto Plata firmly on the cruisers destination map in the coming years, and the substantial economic spinoffs for locals that usually result.

We returned to the resort at 2 pm and Magnus was so famished with hunger that he raced to the snack bar, thinking the lunch buffet was probably closed. The rest of us returned to the room, dropped off our gear and cleaned up a bit, then went to the buffet, filled up a plate with all sorts of culinary wonders, then joined him on the patio by the snack bar. On his place was a half-eaten bun containing one half-eaten dried up hot dog and no trace of condiments, then about 13 cold French fries.

“What? That’s all I liked from the snack bar.”

“Why didn’t you go to the buffet?”

“I didn’t think it would be open.”

“Why didn’t you at least put some condiments on your hot dog?”

“I was too hungry for that.”

“OK, well why don’t you go to the buffet now and get a decent lunch?”

Teenagers. Magnus is going through this strange phase where he barely eats anything during regular meal times, but tops up on junk and snacks throughout the day. It drives me nuts, especially after we cook great meals at home and he just picks away at them. At least here I didn’t have to cook any of it for him.

After lunch, the rest of us returned to the room and, clearly exhausted by the unheard of level of physical activity for a day at an all-inclusive, we all fell asleep and had huge naps. Ana and I woke up in time for a nice beach walk, and we let the kids sleep as both of them had actually been feeling a little stomach upset. It was back to the buffet for a late dinner then we retired to the room and watched part of a horribly stupid movie on tv (the only channel not in Spanish) – a remake of “Clash of the Titans” with a whole roster of Hollywood superstars, stilted and ridiculous dialogue, and a CGI team they must have recruited right from Ringo Starr’s 1981 film “Caveman”.

Posted by Kristofor Olson at 9:35 AM