Let's Ditch the Kids and go to Mexico 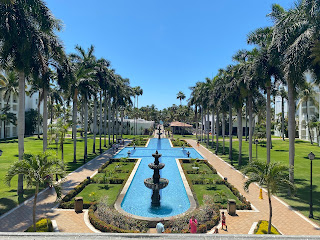 I remember one of the yearly goals I set shortly when the kids were very young. It was for Ana and I to do a beach trip on our own and have one of our three grandparental sets watch the kids. I think I was pining for our carefree days as globetrotting adventurers and not entirely accepting the fact that our lives had changed. That trip didn’t happen, and for a very good reason; we decided that our family would always travel as a team. Wherever we went, the kids would join us. We did this because that is exactly how both Ana and I were raised. We dragged those two little suckers everywhere we went and, coincidentally, it was right around that time the previous torrent of dinner party invites dried to a trickle. The rare invites we did receive were usually from other new parents, resulting in less spectacular cuisine (hot dogs) but more booze (to dull the guilt of locking all the kids in the basement while we piled into the kitchen to pretend they didn’t exist).

Now, with Magnus nearing the end of grade 12 and Stella grade 10, we finally made that solo trip – to Mexico at the start of April. We had three big events things to celebrate - our 20th wedding anniversary in September of 2021, Ana's 50th in November, and also my upcoming 50th in May. And let's add a fourth - the near end of an unusually long and gloomy winter.

Our family is in a transition phase now, cornerstoned by Magnus getting his driver’s license which has truly changed everything. There’s not much for public transportation where we live so getting anywhere requires a vehicle. Magnus has adopted this newfound freedom and possibility with gusto and is an enthusiastic and responsible driver. Stella is not too far behind him - she will be eligible to receive her G1 learner’s license in a few months.

Ana and I are transitioning too into a world in which we are no longer required to be around 24 hours per day and 7 days per week to support our kids. With them both having part time jobs and spending so much time focused on school and their friends, they have had less time for us, and taking them away from school for longer than a day or two for a vacation is simply no longer possible. So Ana and I decided to finally take a beach trip on our own – a week in Puerto Vallarta, Mexico at the start of April this year.

We flew from Pearson airport at 6:30am - our favourite time for departure as after gaining a couple hours of time flying west, we were settled into the Riu Jalisco in Nuevo Vallarta just in time for lunch. The hotel was grandiose, built in an enormous U-shape with half the rooms looking down into an epic courtyard with a series of magnificent fountains in a long pool surrounded by dozens of palm trees and acres of manicured tropics grass. A wide pathway through the courtyard led down to two large swimming pools and a beautifully shaded and expansive lounging area fronting the beach.

Our first lunch was delicious and I knew that I was going to be in for a week of overeating. With the massive spread of options, I wanted to try everything but there is insufficient room on one plate or in one stomach so the trick is to pace yourself and just keep that glass of red wine topped up to wash it all down gracefully..

The majority of all-inclusive trips we’ve done have been to Cuba – a place we truly love, for many reasons. But it wasn’t until we experienced this Mexican all-inclusive that I really understood what Ana has always said about the food in Cuba: it’s good, but not too good. She is absolutely right. At Cuban resorts I can always find something I like, but I don’t feel the need to try everything. Here, because everything was so delicious, it seemed that not trying everything was doing myself an injustice.

After lunch we went for a beach walk, hoping to walk northward along the beach to a town called Bucerias, but after what felt like hours I finally asked a dude on the beach where it was and he waved us on saying to keep going. We collapsed in the sand instead and just layed there for a while absorbing the hot sun and watching the kite surfers flying back and forth across the bay. I think Ana fell asleep but fortunately I did not, otherwise we would have been toast. Blackened, charred, smoking toast. It’s been a long winter in Canada and our skin was white, ghoulish, and unprepared for the sonic radiation.

For our first dinner we went to the Asian themed restaurant. We had scoped it out earlier in the day and the sign clearly said “Long pants required” so Ana and I dressed appropriately for dinner. We clearly exposed ourselves as newbs, as some of our fellow diners weren’t wearing much more than their beachwear. Most of the dudes were in beer singlets, dirty shorts and flip flops. One lady was dressed in this ecstatic, multi coloured robe that barely covered her gigantic breasts. I feared one of them was going to flop out and swing through the salsa or guacamole pot as I waited beside her at the Asian taco buffet, and I’ve never had to respond to a social faux pas like that. I probably would have said something like, “Maybe I’ll try the pad thai instead” then handed her a napkin.

Posted by Kristofor Olson at 6:31 AM