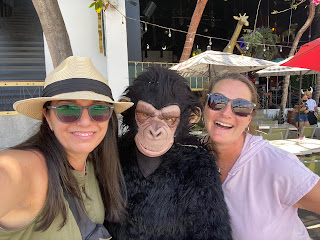 After only two days the wonderfully predictable weather pattern of Mexico’s Pacific coast had become apparent. Lows of 18 and highs of 25 meant air conditioning was not required and we could walk for miles every morning before it got too hot. The days begin calm but the winds pick up around noon every day making it pleasantly breezy for sitting on loungers or going for afternoon beach walks or kite surfing. The sun gathered strength in the afternoons, providing skin sizzle opportunities for the tanners in the crowd. Evenings start to cool, but remain warm enough for shorts and a t-shirt. For a person that despises winter as I do, I can’t imagine a more perfect climate than what we were experiencing here.

I went for an early morning swim in the pool then in the ocean. The past few years I have gotten back into swimming and regularly do laps at the YMCA when I am working in the office in downtown Brantford. Having the luxury of an entire pool and ocean to myself, and all the time I needed was liberating.

After breakfast we walked to Angela and Tony’s condo, making it there in just under one hour. Nuevo Vallarta is a planned three mile stretch of large and newer hotels with security gates on both ends and not much else besides a few restaurants at the southern end. While the beach is nice for walking, there is also a beautiful bicycle and walking path built on the boulevard which runs the entire stretch and is nicely shaded by palm trees.

The four of us walked to the nearby marina and hired a water taxi to take us into Puerto Vallarta, which is also located on the massive Banderas Bay, south-east maybe six or seven miles. As we’ve found with our sailboat, nothing compares to arriving to a new city by water, especially when you see a humpback whale surface along the way as we did!

Pedro the boat cabbie navigated the swells at the public dock and got close enough for us to leap off the boat. The town was bustling, and much different than where we came from as the central area was densely packed with shops, restaurants, bars, tourists, and Mexicans, all held in by a Malecon - a boardwalk than runs along the oceanfront for at least a mile. I immediately loved the vibe. Tony and Angela had been here before, but it had been a number of years, so they were happy to just wander around with us exploring.

We took a few photos, explored a church, tried out some rocking horses in a park, scoped out lunch options – one of which featured a man in a monkey suit trying to draw in customers. At one point we heard some commotion in a second level unit, then heard people chanting “Sell, sell, sell!!” then a round of cheering and applause. Time share training, no doubt, and a clear sign to avoid any offers of freebies in exchange for a time share presentation. These guys were professionals.

While the ladies checked out a string of clothing shops, Tony and I grabbed some beers and sat down on some beachside steps to smoke some Cuban cigars. It was glorious sitting in the sun, watching the activity on the beach and in the air (parasailers), and the rotten weather still clinging onto southern Ontario seemed far away; in fact, about 4,200 kilometers away.

We had a mediocre tourist lunch but above average chat session then walked around a bit more before catching taxis back to our respective home bases. We changed into our beach gear and hung around the beach and pool for a while. One activity offered here that we haven’t seen elsewhere is beach horses for hire. I will freely admit that I do not like horses, have never liked horses, and will probably never learn to like horses. But I like them even less now after a dude rode his rental horse right in front of our beach chairs then stopped for the beast to unravel its massive penis and unload a torrent of horse urine. It’s too bad there wasn’t a sandcastle with a moat there as could have filled it up with his bubbly yellow piss. The rental horses also left poo nuggets littered along the beach which I suppose were eventually picked up by the tide and swept out in the bay overnight as nutrients for the fish as didn’t see any droppings during my morning walks.

We finished up the day with a large feeding at the International buffet, some coffees in the lobby, then a bit of tv back in the room, instead of attending the Michael Jackson show being held in the theater. On these trips I am always beat by evening time as I’m always up early, we’re usually busy all day, and we’re not much for napping. Besides I saw a great Michael Jackson show in Cuba once. That’s enough for me.

Posted by Kristofor Olson at 6:47 AM