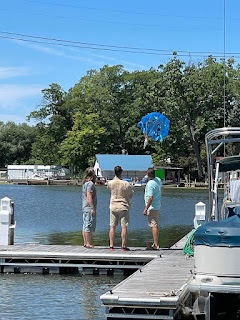 It's always exciting when a new day starts with a big surprise, so imagine my delight when Pat burst into our cabin at 3am in terror reporting that the boat was ensnarled in power lines.

"No man, we're hitting the lines, and I think the mast is electrified!"

Die seemed to be the magic word so I jumped out of bed, wearing only boxers and rat nest hair and joined Pat in the cockpit, looking up.

"Great news! I think it's only the lower hanging telephone lines we're snarled in," I said happily, then added, "Holy shit, we're screwed!"

The crew leaped into rescue action and soon all four of us were on deck with Pat and I in our underwear, girls in their sailing moo-moos, our 1000 lumen spotlight being waved around indiscriminately, one second illuminating the overhead wires, then blinding me at the helm, then shining on the terrified faces of my crewmates, then cast over the whitecapped bay. The howling wind had shifted east and the length of anchor chain that prevented us from hitting the barges was insufficient for holding the boat and our anchor had dragged, but fortunately the telephone lines currently scraping against the mast were holding us from floating further into the shallow bay and grounding ourselves. This is actually a valuable safety feature on sailboats that powerboaters don’t get with their vessels.

"Who the hell's even using a telephone landline these days?" Melissa asked as she cradled her chin and tapped her lip.

We then convened a round table to discuss the current state of communications technology in the US, and I started taking meeting minutes, but then we realized we were still in deep shit, so the meeting was terminated and we resumed yelling at each other, running around on the deck, waving the spotlight around, and panicking.

I hollered at Ana to pull up the anchor as I cranked the engine and slammed it into forward gear. We immediately lurched off the lines and were clear, but the anchor was stuck and wouldn't come up. I left Pat at the helm and ran up to the bow to see what was going on. After a bit of screaming and pointing we realized the steel pin locking the anchor chain in place hadn't been removed, which became more difficult as the pin was now all bent up, but I managed to yank it out, scraping a layer of skin from my knuckle, and the anchor started coming up. Pat drove the boat back into the wind towards the state park docks then called me back to take over as he said there was no damn way he was going to dock the boat. Even though I knew his skill level was high, and he could probably do it blindfolded, I took over the wheel.

We circled the area around the docks, looking for a place we might be able to squeeze SeaLight's wide ass into and found enough dock length in one spot to try. Fortunately, the wind was parallel to the dock, making it quite easy to slide her in and once close enough, the crew jumped off the boat and tied the lines down to the available cleats, but not before Ana landed one of her feet in a large pile of goose shiza, and soiled her only pair of socks, which was really the only lasting damage from this particular screw-up, besides the bent anchor pin.

Several hours later it was daytime and we got up, all cool like, tied up to the dock, wondering if anybody was fortunate enough to see the clown show we put on for them in the early hours. We did not notice anybody snickering.

The ladies heated up an amazing breakfast casserole that Melissa had prepared in advance of the trip and we enjoyed a big meal in the cockpit with the beautiful sun shining down through clear skies. I assured our guests that epic disasters were a vital part of the sailing experience, and it was good we had the first one under our belts.

While the girls were getting ready, Pat and I worked with Daryl on some electrical issues he was having with the boat, until I got distracted with trying to fly the parasailing Barbie we had purchased while on vacation in Mexico earlier this year. It is like a kite but way worse as there must be a hundred strings attaching the doll to the parachute and they got horribly tangled, but not before I did get her into the air for a brief, but magnificent ride.

We jammed the five of us into our nine-foot dingy and motored back up the harbour to the busy part where we saw the restaurant and band the previous night. We tied up at the gas dock, checked out the gift shop/convenience store, then began walking to the town of Wilson, which was only a mile or two away. 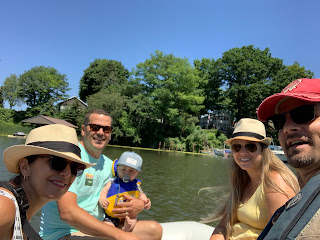 Daryl and Lydia caught up to us about halfway there, just as we were admiring one of the impeccably maintained houses, which were similar to many we'd seen in many other small lake towns of the US - two story, white picket fence, and universally displaying a US flag and often several US pennants hung over the porch rails. The sense of nationalism here is unlike anywhere else.

There wasn't a lot to see in town, but we did find a nice park where we found a baby swing for Beau, and had a swing for ourselves, then moved onto the surprisingly large and well provisioned grocery store where we all picked up some booze and Pat struck gold with a gigantic plastic jar of like 500 pretzel sticks, which he claimed really supplemented the beer drinking experience. As for me, well I scored two cases of Yuengling beer, which is by far my favourite summertime boat brew, and haven't been able to get any due to the closed borders so I was smiling the entire way back, despite my arms feeling like they were about to drop off. 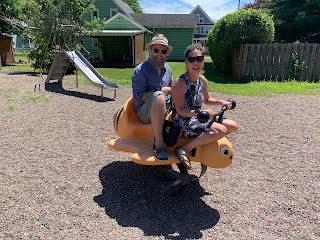 Once back at the boat, Melissa laid baby Beau down on the floor of the cabin while we unloaded the provisions and found places to store them. At one point Pat looked over to see Ana standing over Beau as she was putting away some groceries and he was looking directly up her dress, smiling and mesmerized.

"When he becomes a gynecologist later in life, I wonder if he'll remember his first moment of inspiration?'" Pat said.

"I sure will," I replied as I took a photo then high-fived Beau.

Melissa took Beau down for a nap, I put on the Santana Supernatural cd and we got settled into the cockpit for a beer. It wasn't long before both Ana and Pat started sliding further and further down onto the seats, with droopy eyes, so I took the cue and retired to the comfy v-berth and we all napped for nearly two hours as Santana played smoothly on repeat.

The day's adventuring finished with one final dingy ride into the harbour to meet Daryl and Lydia for a pina colada at the simple yet groovy little dockside Five Coconuts bar. We all agreed they were the tastiest pina coladas we’d ever encountered on Earth. 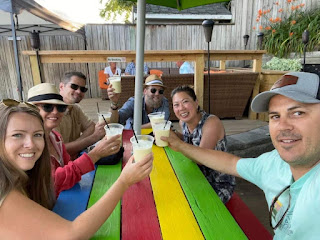 Posted by Kristofor Olson at 6:12 PM