2022 Sailing Trip Day 3 - Caesars for Breakfast, Jolly Jumping, and the Spirit of Rochester 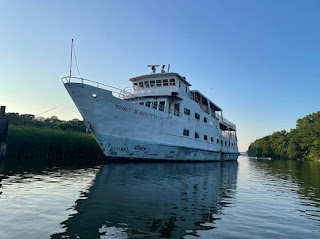 Boat vacations are all about making the miles in the most efficient way. Today's destination was Rochester which was 58 nautical miles or a 9-10 hour sail, so Pat and I got up at 3am, navigated the boat out of the harbour in darkness, then were soon on the calm and flat lake enjoying the dawn experience while the autopilot did her magic and kept our course straight and true.

I am most often by myself in the cockpit for these early morning departures and my routine is pretty boring - usually consists of drinking decaffinated coffee and writing. But Pat brought a whole new dimension to the experience. First, we had a round of butter croissants and blueberry muffins. Then he cracked out an industrial sized bag of extra-crunchy potato chips and that giant cannister of pretzels he bought the day before. Then he made us a couple of Caesars and man, there's nothing like a splash of vodka and tomato juice to start your day. We then moved onto iced coffees, then peanut butter toast and cereal. When Ana came into the cockpit several hours later, she found the remnants of a big party - empty booze cans lying around, crumpled chip bags, food crumbs, and dirty dishes. The boat trip was ON. 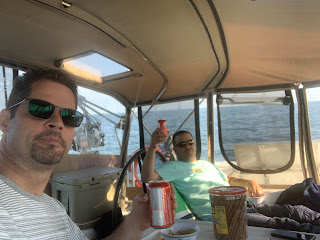 Once everybody was up, eaten, and caffeinated, we stopped the  boat and went for a morning swim and lake shower. The water was a pleasant 23.5 degrees, slightly below Ana's minimum requirement of 25, but she went in anyway and tested out the brand new pool noodle floaties we added to the boat inventory this year, courtesty of the Paris Dollarama. Beau had his own custom baby floatie and happily plopped into the water and floated around blissfully. The day was heating up nicely and it was going to be a scorcher.

Once back underway we removed some of the canvas covering the cockpit and rigged up the boom so it couldn’t move. This fancy engineering enabled us to hang Beau's jolly jumper from the boom, so we strapped him in and let him go. His little legs started pumping and he was off bouncing and leaping like a madman with a crazed look in his eye. After a while I got severely exhausted just watching him so I grabbed some licorice, pretzels, and beers from the cabin so the rest of us could restore our energy reserves. But Beau didn’t miss out – when he finally did tire of the jumping, Melissa pulled out this fancy packet of prepared food mush and squirted it into a spoon, shoved most of it into his mouth, then he wiped the remnants off his chin and wiped it in his hair. The next quarter spoon went on Melissa’s clothes, and the two after then went on the seat cushion then the floor. Ah, babies are so entertaining. 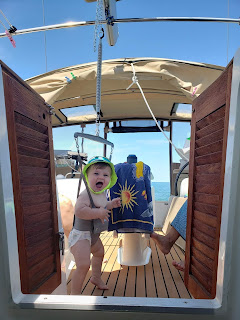 We had a reserved slip at the Rochester Yacht Club, and when we visit yacht clubs there’s a specific protocol we always follow, which helps sustain our reputation as a gypsy caravan boat. First, there must be clothes, towels, swimsuits, lifejackets, underwear, and socks pinned to every inch of lifeline around the boat, and when the clothespins run out just throw the rest on the deck surface. With a baby this was even easier than normal considering the quantity of clothes they go through. Next, you need to ensure your waste holding tanks are full, so that you leave a trail of sweet septic odour behind you, and possibly even in front of you if the tank contents are foul enough. This is so everybody knows you’ve arrived, even the blind folks. Third, the boat should be exeptionally dirty, and this I took care of during our swim as I tossed hundreds of feet of spare line from our mucky anchor hold into the lake to give it a cursory wash. When I pulled it up it was only half clean, but half is better than none, so I then draped it all over the topside of the boat to let it drip dry, leaving snaky trails of muddy stains all over the surface. The boat was disgusting. Lastly, you need to be dressed appropriately, usually micro Speedos and ball caps turned backwards for the men and g-string bikinis and hippie beads for the ladies, or their sailing moo-moos, whichever they are more comfortable with. The only other thing that’s hard to plan for, but a real treat when it happens, is an engine failure as you’re navigating through the marina so that you lose control and crash into a few boats and docks. The yachties really notice that.

The entrance to the Rochester harbour was huge and busy. A steady stream of inbound and outbount boats filled the wide channel. We found the entrance to the yacht club, turned in, and after a bit of confusion with slip assignments, we finally pulled into slip 12, which happened to be located directly in front of the clubhouse, showers, pool, and ice machine. If we were racing, this would be Pole Position.

To celebrate our arrival, Ana and Melissa whipped up chicken caesar burritos, and I belive that may have been the most delicious burrito I have ever eaten. After our long and leisurely lunch we received a message from Lydia saying they were about to arrive so Pat and I ran over to their assigned slip at the far side of the marina to give them a hand docking. Well it’s a good thing Pat had that tub of Vaseline he usually carries around with him, because the wooden posts at the entrance to their slip weren’t quite wide enough for their boat. Pat lobbed a gob of petroleum jelly at the far post, hitting it squarely, then slapped another dollop on the near post, which enabled Daryl to slide it right in, like a gentle lover.

The afternoon sun was wicked hot so we filled up our cooler bags with cold drinks and headed for the pool. The route to the pool led through the clubhouse and I had a peek into the restaurant area. It was magnificent with its classic wooden bar, tall beer handles, starched-collar servers, and antique wooden tables and chairs. Many of the club members were there dining or having drinks and yachting memorabilia was displayed everywhere – trophies, pennants, club burgees, photos of classic ships. I fit right in with my faded swim shorts and Beer Lao wife beater.

After spending an hour or two at the pool enjoying the lovely, cool water, we packed into our respective dinghies to go out and explore the area. Daryl and Lydia have a 9.9 horsepower 2 stroke engine (which Daryl affectionately calls a “two smoke” due to the noxious odours that trail behind them as the engine burns the oil/gas mixture) and we have 4 horsepower four stroke which is less odourous, but also much less powerful, yet still able to push the five of us around. We motored up the Genesee river, passing by many fancy boats, marinas, restaurants, and even a couple of huge barges and tugs that were hauling aggregate and gigantic rocks out to the breakwater they were reconstructing in the channel. The further we ventured upriver, the smaller and more desperate the boats became. As we passed under a large bridge we looked to the right to see Hillbilly Harbour, a sort of graveyard for derelict boats that probably didn’t run anymore, but at least still floated. The shaky docks these boats were tied to led up to the shaky custom bar sheds built on shore. I could picture a million cans of Bud Light being poured down smoky throats, with simultaneous fistfights and laughter to the whines and drawls of country music. There would be groping, and some falling, and perhaps a near drowning most weekends. If we could only score an invitation, it would be a fun place to hang out. 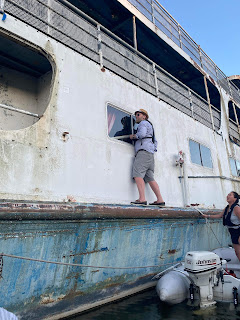 Almost immediately after Hillbilly Harbour, the busy harbour scenery was completely replaced by water, trees, reeds, and lily pads. Oh, plus one boat – an abandoned dinner cruise ship, unironically named “The Spirit of Rochester”, anchored beside the reedy and swampy shore. We circled it, looking for a way in, and Daryl and Lydia found one and in seconds Daryl had scrambled up, over the balcony, and disappeared into the belly of the beast. Hoping to make one of them Found Footage horror movies, we had our cameras rolling, waiting anxiously for Daryl to be attacked by a legion of zombies, or infected bats, or rabid mice, or at the very least a strung out wino, but we were rewarded with nothing of the sort. The only exciting thing that happened was a drone came flying over and probably took a picture of Daryl coming out and standing beside the “PRIVATE PROPERTY – DO NOT ENTER” sign. I assumed it to be a police drone so I yelled, “Cops!” and then everybody started shouting “Cops! Cops!” and just like back in the good old bush party days, we got the hell out of there before we got busted, not thinking that if it was a police drone we were already busted, but in the heat of the moment it was hard to think straight. As we motored off in our low speed getaway dinghies, Daryl said he’d probably come back later, and maybe set it on fire. I’m not sure if he did, but that would be a real hoot. 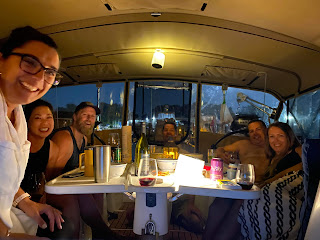 After a very long day we found ourselves late at night in SeaLight’s cockpit, eating chili and Mexican dip, drinking Coronas and rum, laughing and chatting, and everything was going great until Pat’s eyes went blank and he started tipping forward, face racing towards the bowl of chili in front of him. He woke up just in time to avoid the crash, then quickly excused himself and went to bed. Poor little tyke was all tuckered out from the long day on the water.
Posted by Kristofor Olson at 8:26 PM