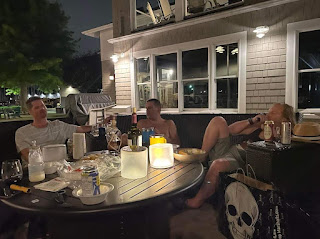 We awoke to another gorgeous, clear, warm day and got busy making a big breakfast of scrambled eggs, sausage, fruit, and toast. To prepare for this trip we had installed a second boat fridge and Ana and Melissa had jammed both of them full of food, leaving space for not an additional single egg, leaving us with the challenge of eating every scrap of it before the week’s end. I had no doubt we could do it.

Having cemented our reputation as bad assed gypsy boaters, I took the hose and bucket and gave the boat a good scrub down. In reality, I hate when our boat is dirty. It drives me mad. And boats seem to get dirty very easily. Once I was done my cleaning, and the others had fed Beau, tidied the inside of the boat, and gathered up their things, we jumped in the dingy and motored over to the chandlery (store for boaters) in the marina next door, where we met Lydia and Daryl. We tied up the dinghies, picked up some overpriced marine goodies from the store, then we all walked over to the nearby shopping plaza. It’s real easy to pick out Canadians in American lake towns as they are the only ones walking across hot parking lots, and they are almost always carrying beer.

While Ana was buying a can of squeeze cheese from the grocery store, I picked up some beer there, but then also got an additional case from the pharmacy (you read that right) while Pat and Melissa were looking for some cough medicine for Melissa who had developed a scratchy throat. Beau was getting a little impatient so Ana took him for a walk through the Walgreen’s isles and found a little toy that played “Baby Shark” when you squeezed it. Well didn’t that work like a charm? So now we all had the damn song stuck in our minds on autorepeat for the rest of the trip. 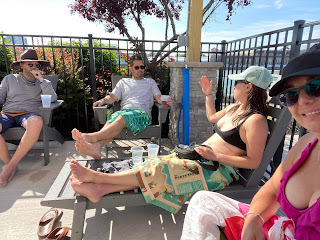 After grabbing a coffee, the final stop in the plaza was the liquor store. We all loaded up on cheap spirits and while we were checking out, the owner asked if he could deliver the purchases to our boats so we didn’t have to carry them – this guy knew his customers. As we were walking away he came running out and grabbed the two cases of beer I was carrying and told me he’d deliver those too. He probably noticed my arms were still hanging several inches too long after humping those crates of Yuengling beer for miles back in Wilson.

We slogged back to the boat in the afternoon heat then settled into the cockpit for a late lunch of tremendously good chili dogs made with the leftover chili from the previous night and fluorescent orange lines of Ana’s incredible squeeze cheese which amazed and delighted everybody. This wonderful lunch was enough to put me to sleep but I was somehow conned into joining Ana, Lydia, and Daryl on a shopping trip to a nearby shopping area in Irondequoit that had a West Marine and a Marshals. An Uber picked us up at the marina gate and the four of us packed into the back seat as the female driver already had a friend sitting up front. She had thousands of reviews and a very high rating but all of her previous customers must have not felt the need for brakes on a car because it was all metal on metal, baby. She ground, shrieked, squealed, and shrieked us all the way to the mall, then dropped us off in front of Planet Fitness. I don’t know if that was some kind of underhanded comment on the state of our physiques, but fortunately the West Marina was right next door.

Just like when Ana shops for clothes and never leaves a store empty handed, it goes the same for me with marine stores and I found a lovely package of assorted stainless steel screws and a few other things, but Daryl really knocked it out of the park by buying a new battery charger. We then walked a short ways over to the Marshalls strip mall and there was nothing, and I mean nothing else in that mall of interest to me, but I did  join Daryl in visiting the pet store where he bought Chili Dog a brand new shirt as a souvenir of his trip to Rochester. As far as I could tell Chili Dog really only ever left the boat for a poo, so I wouldn’t say he extensively explored Rochester, but who doesn’t enjoy a new shirt?

We finally made it back to the marina after being rejected by a couple of Uber drivers for being a party of four and then having to stand on the concrete mall sidewalk boiling in the hot heat for what seemed like a very long time. The cool pool water was invigorating and washed off all the retail sweat I had accumulated from my mall journey. The pool itself is positioned right next to the harbour channel so you can watch all the boats going back and forth from the comfort of your lounger, so we sat on those loungers for a good long while, in no hurry to do much of anything. But soon, we started getting hungry so Ana and I returned to the boat just in time to meet up with Pat and Melissa and Beau who had taken the dingy out for a ride to explore the park on the other side of the channel. 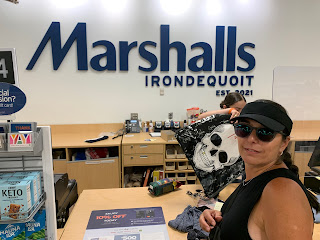 Happy hour drinks ensued then everybody got busy making dinner. Soon we were positioned in the cockpit with tenderloin steaks, green and yellow beans from our garden, air fried potatoes, and some fine Menage a Trois wine Melissa had picked up. Everything was delicious. Ours was turning out to be a Michelin-starred sailboat galley on this trip.

Beside the main yacht club facility was a smaller building that housed an incredible bar with all wood interior and yacht club burgees from around the Great Lakes and the world displayed proudly. Outside the bar was a large seating area with comfy couches and chairs. As it was a Monday evening the place was practically deserted so we all gathered at one of the sitting areas with music, snacks, beer, wine, luxurious Plantation sipping rum, and Cuban cigars and talked and laughed well into the night. Both Chili Dog and Beau stayed up to join the party!

Posted by Kristofor Olson at 10:24 AM