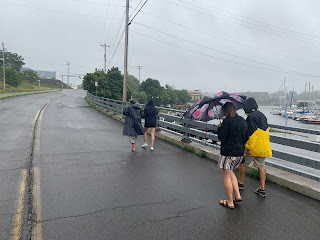 For the first moment of the trip, I found some time to do some writing in the morning. Normally when it’s just us I have all sorts of alone time on the boat – during the overnight runs, the early morning departures when everybody goes back to bed once we’re underway, during the afternoons in marinas when the girls go shopping. But when you have friends aboard, there’s no time for that nonsense. It is non-stop action all the way, especially during a trip like this when the weather is beautiful. But the forecast had come true and today was rainy and windy.

By 10 the thunderstorms had passed and it looked like we had a window to make the jump to our next location – Oswego. The strong winds were blowing south but we’d have good cover for the first fifteen miles of the trip as we hugged the shoreline moving westwards, but at that point we’d have to turn south and face the waves directly. Hopefully it would be manageable.

After Tony snuck into the marina office and underhandedly paid for the dockage (just like he did with the fuel back in Kingston – some people just can’t be trusted with a credit card), we launched and found ourselves alone on the water, but suitably sheltered from the wind. The worst thing in sailing is being rushed, or having to be somewhere at a certain time. We could have stayed in Sackets for another day and night, but we had to be back in Newport by Saturday morning, and there were an awful lot of miles between us and there. So I made the call to leave. But I was regretting that decision when we made the turn around the headland and headed south into the lake. Some of the waves were five to six feet with a short period which was causing the boat to slam up and down into the water, crashing menacingly, tossing us around.  The wind was blowing at 20 - 25 knots but gusting to 30 at times. After a mile or two of that I gave up, turned the boat around, and we sailed back into the cover of the headland, dropped the anchor, and had lunch, hoping the winds would lose strength. I was loathe to return to Sackets, but didn’t want to risk things by continuing on in such bad conditions. 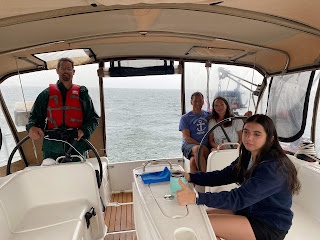 After two hours of waiting the winds had weakened a bit so we secured everything down and powered back into the open lake. The waves were now down to four feet and manageable so we agreed to continue on to Oswego by engine and autopilot.

“What do you think about the water conditions?” asked Angela.

“It’s going to be fine, looks good, no worries,” I replied confidently.

“Then why are you the only one wearing a lifejacket?” she noted.

“Ah ha, you got me there. Yeah, we’re probably going to die, but I prefer a slow, lingering death.”

The remaining 30 nautical miles ride wasn’t terrible, and SeaLight handled the waves well, but it was slow and took six or seven hours. We arrived in the early evening to a dull, grey, dreary Oswego. On the way into the harbour Tony took a stumble and put his hand right through the canvas, whoops! Nothing a little duct tape can’t fix.

We reversed into our slip at the Oswego Marina then made an immediate and unanimous decision to get the hell off the boat and go find something to eat in town. We halfheartedly put on rain gear and started the trek into downtown, accidentally taking the furthest route possible to the closest restaurant – The Press Box, which we discovered later we could practically see from the marina. The walk was wet and depressing. Any city looks like hell when it’s raining and cloudy, but Oswego looked particularly bad. 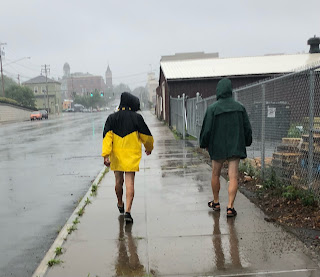 The Press Box was your typical American Sports Bar and the food was nothing special, but it filled the gap. They did have one interesting item on the menu called “tossed salad on pizza”. I had to ask.

“Excuse me, what is the tossed salad on pizza?” I asked the server. “Surely it’s not just a salad tossed on top of a pizza, right?”

“That’s exactly what it is. The cook just throws the salad on top of the pizza. Very popular item. Healthy choice.”

On the way back to the boat we stopped to check out the marina washrooms. The door was propped open with a bucket and there was a guy inside cleaning fish at the sink. It smelled terrible. Tony pointed to the coded lock on the door and asked the guy if he knew the code.

“Sure, it’s 1436, but you don’t need to remember it,” he said, wiping his face with the part of his jacket arm not covered in fish slime.

“Because somebody carved it into the door frame, see it there?” he said as he pointed his scaly and bloody knife towards it.

Back at the boat, I pulled out a USB key Andrew had handed me back in Kingston and stuck it into the tv. A brand new horror movie “Black Phone” started to roll. I actually remained awake for the entire movie. It was excellent.

Posted by Kristofor Olson at 6:28 PM