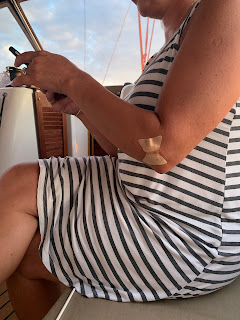 What a difference a day can make. We awoke to a beautiful, sunny, hot morning. The dystopian Oswego of yesterday was gone and replaced with an Oswego full of promise, life, and probably craft beer.

Tony and Angela made us all a delicious breakfast then we walked together towards downtown. Oswego is split neatly in half by the Oswego River which, if you follow it far enough, leads into the Erie Canal, which in turn will take you to New York City and from there the Caribbean or anywhere else in the world you would like to go. This is why I wanted to come to Oswego, as this is the town we will be returning to someday (inshallah) when we make our first trip to the Caribbean, unless we choose to go the very long way around through the St. Lawrence River.

We reached the bridge that crosses the river and the ladies turned east in search of consignment stores, Marshalls, and other value retail while Tony and I struck out west, across the bridge, towards the downtown area. We stopped midway across the bridge to admire the first of the seven locks on the Oswego River and the pack of kayakers who paddled into it then slowly rose as the water poured into the lock, and one 11 foot vertical rise later, the doors of the lock opened and they continued paddling upstream to the next lock.

We continued wandering into the historic downtown and came across an old armoury with a YMCA sign out front. After doing enough rounds of the famous dance to attract attention, we went inside and the manager on duty gave us a tour of the facility and filled us in on the history of the place. From here we walked up and down the streets of Oswego, seeing stately buildings, shops, restaurants, cool bars, a grocery store, and as we approached the water we came across the marinas. Along the way we noticed many electric Bird scooters propped up on street corners, lying on grassy boulevards, and leaned up against buildings. Bird is a company that rents scooters via an electronic console mounted on the scooter and a smart phone app. We both started fiddling with our phones to download the Bird app and get our credit card info entered, which took an incredible amount of time and effort, and I never did get mine working, so Tony spotted the both of us for scooter rentals. We were off! 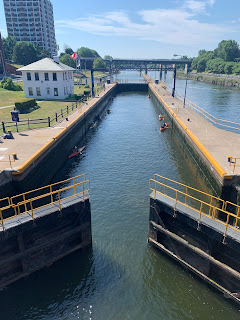 Bird scooters are extraordinary. They are a testament to the fact that 95% of the energy used by a vehicle is used to just move the mass of the vehicle itself around; your weight is practically a rounding error. Not so with a scooter. These lightweight machines and their barely noticeable battery packs can whiz you around at up to 25 kph for something like 40 kilometres on a singe charge. Our friends Daryl and Lydia have an electric scooter on their boat which they store in a closet, and it has little hooks for hanging shopping bags and even a small trailer hitch for towing buggies or wagons!

Tony and I cruised around the marinas, down to the nautical museum, all throughout downtown, down a canal-side trail, and finally back up and over the bridge we had crossed over earlier, then a few blocks up to a second hand store where we found the girls. They handed us the bags of their purchases and we handed over the scooters then we walked back to the boat and left them for their second round of shopping.

Back at the boat we had some bbq sausages and a beer then got to work changing the primary and secondary fuel filters on the boat – something I had meant to do first thing in the spring but had somehow not made it to the top of the list and had been bothering me, as fuel issues are almost always the main culprit when your engine starts acting up and we didn’t want that. Somewhere along the way Tony had found a canvas repair person in the marina and talked her into patching up our rip. 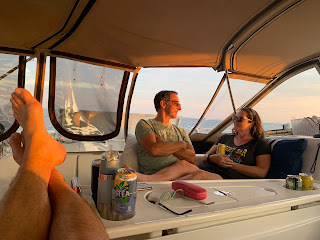 Several hours later the ladies returned. Angela looked charming as usual. Stella was very fashionable. Ana had scrapes on her arm, legs, feet and bandages stuck all over her.

“What happened?” I asked, panicking.

“Mom fell off the scooter,” Stella said. “Flipped right over it and rolled across the concrete road.”

I was flabbergasted. She didn’t have mark on her face, her hair was neatly tied back in a bun, and she looked calm and collected.

“Are you serious?” I asked her. “What happened?”

“Well, basically we were running away from the cops. We weren’t wearing the mandatory helmets, Stella isn’t old enough to drive one, and we were riding them places we weren’t supposed to. So when we passed a cop car we hit the throttle and scooted out of there,” she said, all Daisy Duke like.

“OK, sounds good so far, but how did you fall?”

“I was turning back to make sure the cops weren’t gaining on us and all of a sudden I was in the air.”

“Did you hit your head?”

“Nope, my bun saved me,” she said as she caressed the knot of hair at the back of her head. 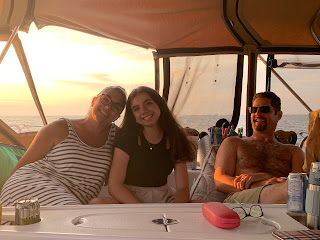 We decided that one full day in Oswego was enough to get the hang of the place, so at 7pm when the canvas repair was complete, we left the dock and started upon the 45 nautical mile sail to Rochester. We had a perfect moment along the way – the setting sun was casting a gorgeous orange glow over us as we enjoyed a glass of wine in the comfort of the heavily pillowed cockpit. We took turns answering critical life questions such as:

“If you could only drink two kinds of liquids for the rest of your life what would they be?”

“If you could only visit two more countries in your life, where would you go?”

“If you could only eat one meat, one fish, and one vegetable for the rest of your life, what would you choose?”

It's amazing what you think of when sequestered to a sailboat cockpit for hours and hours.

We made it to Rochester around 2:30am and docked with no issue. On the way through the channel, Tony had been diligently searching the shore for something.

Angela asked, “What are you looking for?”

“A canvas repair shop,” Tony said. “In case I put my arm through the other side of the cockpit!”

Posted by Kristofor Olson at 7:03 AM