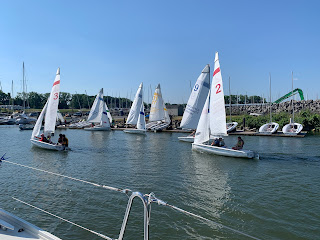 8am. Another blistering hot day. Good time to be at the Rochester Yacht Club with their beautiful pool.

Our friends Daryl and Lydia came over for a visit. While we had been sailing up and back from the Thousand islands, they had been deep diving into Rochester and Sodus Bay, mainly because driving their big power boat as far as we went, with its twin 454 fuel demolishing engines would soak up their next six years’ worth of travel budgets. We introduced them to Tony and Angela then caught up on all our news and adventures. Imagine being separated from friends at home for a few days, then meeting to catch up on all your news and adventures. It would be a mighty short conversation. Not so on sailing trips!

We helped them get undocked then they began the next leg of the trip to Point Breeze, 32 nautical miles eastwards. As for us, well, we went swimming, watched the kids from the local sailing school going back and forth in the channel practicing their skills, walked to the shopping plaza, had a late lunch of grilled cheese sandwiches, went swimming again, and soon it was time for dinner. We walked over to Silk O’Laughlins, a busy Irish pub on the channel, and were seated at the last table, right near the chain link fence at the edge of the property. From where I sat, it looked like Ana and Angela were in county lockup. The meal was pretty ordinary, but things got exciting when the sun set and all the mayflies hanging out in the trees above us descended into our hair, clothes, bags, drinks, and plates. We learned that mayflies do not pair well with Yuengling beer and nachos. 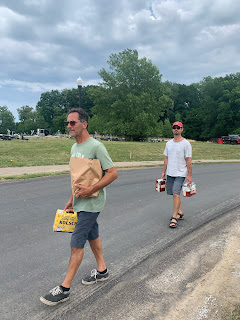 For our last night in Rochester (and first for the Henriques) we planned a night session at the lovely outdoor seating area between the clubhouse and the burgee bar, seeing as we had so much fun the first time around last week. Cigars, Planation XO Reserve 20-year-old rum, craft beer, gin & tonics, chips, party mix, LED candlelight and, for me, a fresh shirt, and everything was right in the world. This particular spot had generated a magical moment for us twice now. It may be my favourite place on Lake Ontario.

By this time, Ana was starting to feel the pain from the fall and she was moving slower and slower. I was thinking a few shots of rum might help her but she didn’t go for it. I had a feeling the full body pain was going to get a lot worse before it got better. But she was grinning and bearing it. 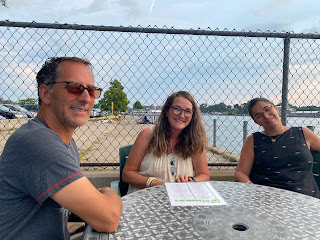 During our chill session I told Tony and Angela about our interesting experience at the boat earlier in the day when they had gone for a walk. A man who had arrived with his wife on a boat called Real Cream walked by our boat and stopped when he saw me on it. He introduced himself as Mike and asked where this boat came from. I told him the story as I knew it of how it had been a charter boat in the BVIs, then was purchased by a Canadian couple and sailed back to Lake Ontario, where it sailed for many years then was sold to the man we bought it from, who also sailed it on the lakes but also took it to the Caribbean for two seasons.

“My friend is the one who bought this boat in the BVIs. I helped him sail it up to Canada.”

I was dumfounded. I invited him on board to see the boat and showed off all the improvements that had been done over the years. He told me the boat was fairly beaten up after its stint as a charter, but that his friend had done a lot of work on it. And the owner we bought it from had also done a great deal of work and upgrades. The most surprising thing he told me was that the boat used to be white! His friend painted it blue, then the guy we bought it from had it put back to white. He also said that SeaLight was the original name of the boat. That made me happy. 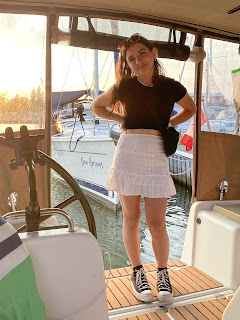 Posted by Kristofor Olson at 10:54 AM