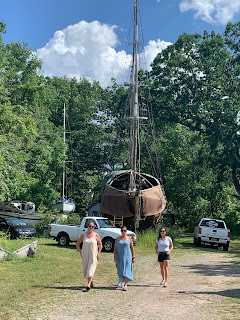 Tony, Stella and I were up with the sun to get an early start on the sail to Point Breeze. Stella was up strictly for the sunrise experience, but as the sun was obscured by the overcast sky, she went immediately back to bed. There was a strong wind warning for Lake Ontario today but once we got through the channel and into the open lake we found the wind to be excellent and waves slight, so we hoisted the sails and had a lovely, quiet ride without the engine. Finally, some help from the wind instead of it blowing directly from where we’re trying to go.

As we approached Point Breeze (also known as Oak Orchard), I saw a large breakwater running parallel to the shore with entrances on both the east and west sides, then past this was a channel running into the marinas. When Ana had booked our marina slip with Four C’s Marina she was told to keep to the right side of the channel. I could see the channel, but I wasn’t sure if it mattered which side of the breakwater we should enter in. There were no buoys and the electronic charts showed both sides to have insufficient water, which wasn’t of much help. So I chose the east side as it was closer. As we approached, I watched the depth sounder: 12 feet. 10 feet. I slowed the boat down to a crawl. 6 feet. 5 feet. Then a grinding noise and a sudden stop. We had hit bottom and were stuck. I slammed the engine in reverse and pulsed it. Nothing. I had everybody stand on one side of the boat to heel it over a bit. Still stuck. Fortunately, the wind was blowing us away from the shallow spots, which was good, but it was insufficient to move us. I looked over to the breakwater to see a steel structure with a beacon on top, and an idea struck. 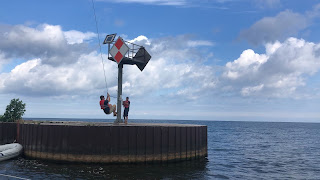 Tony and I jumped in the dingy then I had Ana pass us the main sail halyard and a bunch of extra line. I tied a couple of lines together and to the halyard and we took the dinghy to the breakwater, tied it to the safety ladder and got off with the rope, then wrapped the rope around the steel base, and shortened it up by hanging off it and snugging. This pulled the top of the mast down, thereby lifting the keel, and Ana was finally able to reverse the boat off the ground and back out into the deeper water, just in time to avoid being seen by the pack of sailing school kids coming out in their bathtub boats. Whew, close call! I hate showcasing what not to do when sailing…but it seems to happen more frequently than I care to admit.

We went around on the west side and had barely enough water to float us, then found our way up the channel and into our slip. I was feeling a little beat so I had a short nap while the others organized a few things on the boat and went for a little walk around the area to have a look. There didn’t seem to be much of a marina office, but Tony did find a house that looked like part of the marina so he went in, yelled hello a few times with no response, then used the washroom, no problem. Except we found out later it’s somebody’s house. Tony had mentioned the toilet paper was of a much higher quality than the standard issue marina half-ply variety. 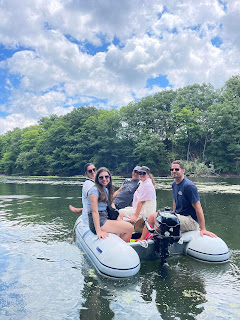 Once I had my cat nap we dinghied up to the Oak Orchard Yacht Club and found Lydia and Daryl. I tell you, these guys acclimatize fast – they took us down the docks, introducing us to people, then across a long dock leading to the shore over a shallow swampy area, pointing out several turtles and frogs in the water they had given names to (“There’s Timmy, he has a great personality…for a frog.” “Oh, there’s Fuzzball, lovely turtle but very possessive of his favourite rock.” “Oh yay, there’s Fredrico, a very shy turtle but amazing sense of humour once he gets going.”). They then led us into the clubhouse, introducing us to more people along the way, showing us some little known areas and features of the building, then told us the entire history of the yacht club. This is exactly why you partner on these trips with ultra social powerboaters – send them in to do the hard work! 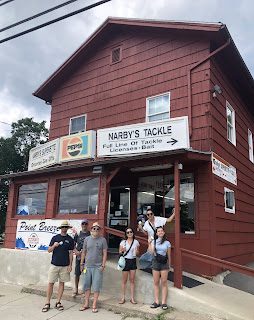 After our tour we jumped in the dinghies to go gunkholing up the river and we travelled for a long, long way, seeing a hundred different species of birds, frogs, toads, and I think we saw a cat on the deck of one of the riverside cottages. We went for so long that the ladies were starting to have a retail attack so we needed to find a store, fast. Captain’s Cove Motel and Marina was the closest and looked the least abandoned so we tied the tenders up nearby a collapsed bridge and walked up the hill to check out the store. Now I didn’t go in, but it looked solid hillbilly, and I was happy when the girls returned unscathed, but there were reports of taxidermied squirrels caught in the act of fornication, plus they came out carrying a bag of Dinosaur Barbeque potato chips so at least they were able to buy something. The shopping got even better when we dinghied a hundred metres back down the river, then walked up the highway to Narby’s Superette & Tackle. It looked real sweet so we all went in. The older lady at the counter looked very unpleased to see customers.

“Afternoon! How are you?” Ana asked.

“Terrible,” she responded. “All alone.”

“Can’t get staff. Nobody wants to work. So I have to. Pffft.” 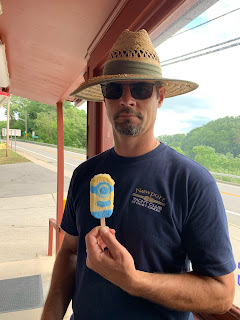 Nobody else said hi to her and we just got shopping. There wasn’t much in there. The Narby’s Tackle branded merch was pretty picked over – just winter gloves and a few squashed hats left. They had a few basic boat parts, some jugs of oil, a small selection of groceries, and a cooler full of low grade beer. Fortunately, there was a small ice cream collection, so most of us grabbed one of those – I got a yellow banana Minions popsicle which made me think, “KEVIN!” so I just had to have it, but it ended up tasting disgusting. Up at the counter as we were queuing to check out, Stella and Ana found those grab jugs of small candies like mini-tootsie rolls, red hots, blue whales, gumballs – that sort of stuff. All 5 cents each. Stella put her bag of candies on the counter and said, “I can’t believe these are only five cents each. Nothing costs five cents.”

“They used to be one cent. Pffft,” the clerk lady said as she grimaced, took a guess at how many candies were in the bag, and rang her out. As we were leaving a man came into the store and told the clerk lady he wanted to have a look in the tackle shop, which was located in a separate building beside the one we were in.

“Oh GREAT! Now I have to lock up THIS store and go over THERE,” she said with fiery eyes, staring at the hapless customer wanna-be. “FINE, go back there and wait. I’ll be there when I get there.” She pulled herself up painfully then shuffled out from behind the counter and pushed us out then locked the door and that’s the last we ever saw of the crusty clerk lady. I felt like she needed a hug, but nobody was offering. 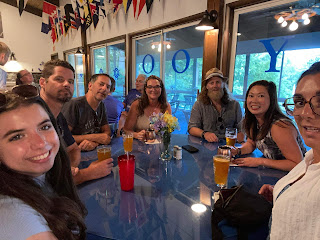 With the retail therapy complete, we traveled down the river and back to SeaLight for cold drinks and an incredibly lush charcuterie board assembled with care by Ana and Angela. After demolishing that we went for a walk around the marina and boat storage area and I snapped a cool photo of the three ladies in front of a disintegrating pirate ship. I think they should use it for their next album cover.

Everybody was beat from the day’s heat so we all took a big nap and didn’t emerge until 6:30, then packed back into the dingy and motored back up to the yacht club for Pizza Night. The yacht club was full of people, all nice and friendly people, and we had all you can eat pizza, delicious IPAs, Caribbean Mules, and even pieces of pie for dessert. Lydia and Daryl even offered to sponsor us for a membership. 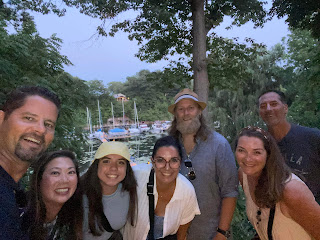 We hung out for a good long time, long enough for Stella to pick up a rare Oak Orchard Yacht Club hat which she will wear with pride. At the end of the night somebody tossed us a bottle of cleaner and a rag and we wiped down our table, getting it all ready for the next party.

With that, we headed back to SeaLight, did a bit of trip planning for the next day, and hit the sheets.

Posted by Kristofor Olson at 3:57 PM