5 am came fast and as the sun rose we slipped off the dock, down the channel, around the break wall, and back out into the lake. Today was Friday and we had decided to make the 60 nautical mile run home to Canada, stopping at Port Colborne to check back into the country, fuel up, and have lunch and a swim then make our way back to Newport. Tony and Angela had to leave the following morning so we considered spending today in Wilson then doing the overnight run, but the weather was looking potentially stormy and we didn’t want to take the chance. 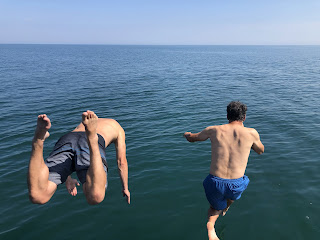 This morning’s sunrise was spectacular and I tried waking up Stella but she wouldn’t budge. That left Tony and I in the cockpit to enjoy the show and the ride. Once the crew was up Angela and Tony made these incredible breakfast burritos and we devoured them, then went for a morning lake swim and bath shortly after that. The water was still a balmy 25 degrees, even way out in the lake.

I don’t want to complain too much, as I know what a hassle it is to cross the border by car, but checking in with customs was a real pain in the ass. We arrived at the fuel dock at Port Colborne, called customs, and were on hold for a full hour. The officer who finally took our call was a cranky grouch and had to have each of our full names and addresses painstakingly spelled out, despite us all being Nexus members and having already submitted all of our information through the ArriveCAN app, whose purpose as stated on the website is to “modernize cross border travel”. I think they should just buy the amazing app the US uses, as their system is fast, efficient, and flawless. 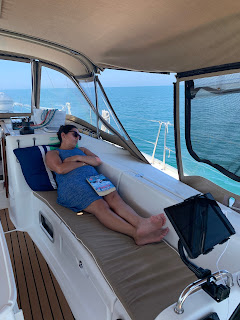 We cruised back out in the lake and tried to anchor near the beach at Port Colborne but it was far too shallow to get in, so we anchored further out and had lunch and a swim. By the time we were ready to leave, the wind had really picked up so we started sailing. It was an awesome, high speed sail with the boat heeling over suicidally and wind ripping past the sails. While I was loving the boat tearing across the water I looked over and noticed Ana in utter pain as she was trying to hold on, body stiff and tensioned. Ah, I’m such a dummy, the Bird wipeout! Her bruised body was hurting worse than ever so we turned into the wind, dropped the sails, and motored back, which was much more comfortable.

By early evening we were pulling into our slip at Newport Yacht Club. We got SeaLight tied up, shore power plugged in, and air conditioning turned on when all of a sudden…the AC quit. Have no fear, Captains Kris and Tony were on it. Cushions were ripped off the salon seats to expose the AC, tools were readied, seacocks shut, clamps removed, hoses replaced, filters cleaned, system primed, and after an hour or more, and several pounds lost in sweat, the AC was back in action, blowing stronger and colder than ever. It was beer time. 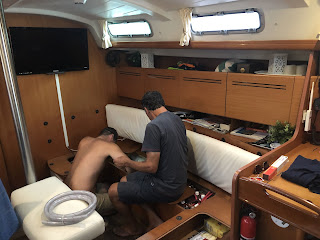 We had dinner on the boat then assembled at the marina parkette along with a dozen other members there hanging out, making dinner, and having fun. I don’t know what time it was when we went to bed, but I can tell you I slept like a rock and didn’t open my eyes until close to 9am the next morning.

It was nice to be back.

Posted by Kristofor Olson at 4:38 PM