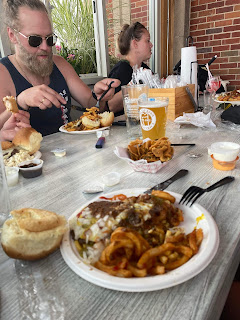 We had planned to leave Rochester today but the winds had really picked up and weather had become unsettled with thunderstorm warnings so we decided to stay put. We usually take our annual sailing trips at a pretty fast past so spending three days in one location is very unusual for us, but we were enjoying Rochester and there was plenty more to see and do.

After stuffing ourselves with Belgian waffles and fresh fruit for breakfast we got into the dinghy and motored across to the other side of the channel and found a public dock to tie up the dinghy. We went for a walk down some residential streets then arrived at Ontario Beach Park and almost immediately ran for cover beneath a huge maple tree as black thunderstorm clouds passed overhead and unleashed heavy rainfall and strong winds. Fortunately the showers didn’t last long and we continued exploring the park until we found a large building that looked like it was a converted religious convent or maybe military barracks, and it fronted the expansive beach, so we went in and found a big public display on lake ecology, environmentalism, and some local history as well as a small contingent of lifeguards. It was hard to tell exactly what this building was so I asked one of the lifeguards and she told me it was built originally as a bathing house and had been just that for its entire history. We snapped a few photos, then waited patiently as another rain shower passed through, then walked the length of the beach and back into the park where we found the historic Dentzel Carousel, in continuous operation since 1905, and the last remnant of what used to be a huge and popular amusement park that operated from the late 1800’s for 40 years. We bought our one dollar tickets and took Beau for what I think was his first carousel ride. He loved it, we loved it – the intricately carved horses, ostriches, tigers and mules, the faint smell of grease from the pulleys, gears, and pinions, the rhythmic rise and fall of the animals, the simultaneously creepy and enchanting sound of the piped circus music, and the sense of dizziness as is it spun you around and around.

We continued our walking circuit back to the west wall of the channel and continued along the concrete path of the Genesee Riverview Trail  until we reached some large buildings stamped on the side with “Port of Rochester” which looked to maybe be old shipping terminals, but now housed a big restaurant called Bill Gray’s. If I can think of the qualities of a restaurant you would decidedly not want to visit, this one had it all – in the middle of a busy tourist area, near a carousel, large and gaudy, but it was starting to rain again and we were getting a bit peckish and there was nothing else around so we went in, grabbed a table with a channel view, and ordered up some drinks. Lydia and Daryl arrived in their dinghy shortly thereafter and joined us at the table, after having spent the morning installing their new battery charger.

I kept coming back to one item on the menu. It was called simply a “plate” and said, “Choose a hamburger, a hot dog, or both.” How could it be both? For the same price? There were scant details on the item, so when the server returned I asked her about it.

“Yeah, the menu doesn’t explain it very well,” she said, “but it’s a plate with two meat items, two side options like fries, mac and cheese, or pasta salad, then a bunch of meat sauce and mustard and other stuff dumped on top.”

“Are you serious?” I asked, intrigued with the possibility. This sparked a memory from the Oktoberfest festival in Kitchener we attended many years before with my brothers and their wives. While standing in line for our food at the buffet line the server asked us, “Would you like gravy on the vegetables?” Without pause, the three lads immediately responded and enthusiastic, “Yes!” The world I want to live in is the one in which you get gravy on your vegetables.

“Kris, it looks really big, why don’t we split one?” Ana asked.

“C’mon, let’s get one hot dog, one hamburger, then we’ll split it,” she urged.

I was starting to panic. Everybody was looking  me – the server waiting with her pencil in hand, tapping her foot. Both Pat and Daryl were giving me the side eye and telepathing me “Don’t share, be a man.” Lydia was crafting her own selection and getting hungrier by the minute, and even Beau had stopped horsing around, grabbing everything in sight and stuffing it into his mouth and was looking right at me.

I cracked. “Can we at least get a side of waffle fries?” I responded weakly. She agreed and the order was place. I felt immediately cheated, and it got worse when Lydia, next in line, ordered HER OWN plate, then Daryl ordered HIS OWN plate and then it was Ana’s turn. I envisioned our future, in 20 years walking into a restaurant and ordering “One beer, two glasses please.” Splitting orders of small fries. Going halfsies on a chili dog, cutting it in two, and always having to offer her the larger portion because it’s impossible to get a perfect split. Living a life of perpetual hunger. Watching my cherished love handles melt away. I had to take a stand.

Launching my chair backwards and bolting up, I shouted, “I’m getting MY OWN plate! MY OWN! Not sharing!” An awkward silence ensued. Beau looked away, embarrassed. Melissa started quietly whistling a Meatloaf song, looking up at the ceiling. Pat smiled, nodded, and gave me a sly thumbs up, then pretended he hadn’t. Daryl started scanning the menu busily, despite having already ordered. Lydia sipped her drink, turned her head and focused intensely on something interesting in the channel, even though there wasn’t anything interesting in the channel.

“Fine. Jeez, you don’t have to get all snappy about it. But I’m getting chicken fingers with my plate.”

And then it was over. I got what I wanted. And the plate was absolutely amazing, in a heart stopping, chasing morbid obesity, clotted arteries kind of way. I even got to eat part of Ana’s because she only finished half.

We returned to the boat and I couldn’t do much for the rest of the day as the meal sat like a stone in my belly as my body tried to figure out what to do with the clotted mess. The girls decided to go shopping at the plaza so Pat and I hung out with Beau in the cockpit and drank some beers which was exactly what my guts needed to untangle and loosen up that rigid ball of starch. I expected my body was probably going to reject most of it, and it would probably come out looking much like it did before it went in, so I checked the holding tank on the boat to make sure there was plenty of available room. I also did some research on that intriguing lunch selection and discovered that it was actually called a “garbage plate” and even trademarked by a Rochester restaurant called Nick Tahou Hots who invented the dish decades before. Of course, other restaurants copied the immensely popular meal, but give it other names like “trash plate”, “sloppy plate”, or in our case, simply “plate”.

We all assembled on SeaLight later that night to crack into that booze we bought the day before and also to sample some scotch that Daryl had picked up. It was a lot fun, but I will admit I was a bit distracted as all I could think about is what I’m going to order on my next Rochester plate.

Posted by Kristofor Olson at 2:09 PM