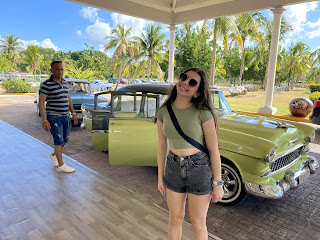 “Have you seen my deodorant?” Ana asked after I returned from my early morning walk.

“It’s a smaller stick. Smells great. Really expensive stuff. It was just here on the counter last night,” she said pointing to the bathroom sink.

We looked all through the bathroom, then the rest of the room, in the suitcases, in jacket pockets, under the bed, and on top of the TV. It was nowhere to be found.

“The maid must have stolen it,” she decided.

“You think the maid stole your deodorant? Didn’t you leave a nice gift pack for her yesterday?” In advance of these trips Ana puts together a little gift pack for each day which she leaves for the cleaners.

“I sure did, that’s why I’m so pissed off. I’m not leaving the gifts anymore.”

“Are you sure? I don’t think the maid would have taken it.”

At that point I just got out of the way and went for a shower. When I finished and came out Ana was all smiles.

“In the safe. With the other valuables. I must have put it in there last night. I’ll leave her the gift pack.”

Disaster averted. I was then able to move onto the rest of my 7-minute morning routine.

When we vacation, we always leave the electric toothbrushes at home. I think it’s good to give your gums a good manual grinding occasionally and bleed them out. Rebelling against the advice of your dentist just feels good too. Those dentists are so smug. They make us feel bad about not flossing. They give us tips on our brushing technique for the hundredth time despite knowing we will simply never change. They ask us about the frequency of our coffee, black tea, and red wine consumption (constant, duh.) And the worst part is the more we ignore their advice, the more goddamn money they make off us as we continually return to have them repair the damage. It’s like reverse psychology. When they say “don’t do this” they know damn well we’re going to do it anyway, which puts us back in the robotic leather chair 8 months later getting drilled, filled, and billed as we watch some awful Disney moving on those ceiling mounted TVs.

As I approached the sink, I realized that Ana had packed us two green toothbrushes. I barely even noticed the identical toothbrushes last night as I was so excited to be on vacation so probably just grabbed the one that was less wet. Look, Ana and I share practically everything, but sharing a toothbrush is going too far. It's too intimate. It's almost as bad as trying to use somebody else's Excel spreadsheet. I rectified the situation by tying a strand of dental floss around Ana’s, as she’s the regular flosser in the family. I was rewarded with a little shot of dopamine for already solving a tricky problem so early in the day.

As I shifted from giddy arrival excitement to regular vacation glee, I noticed one other issue with the packing. She didn’t sufficiently hide the snacks we brought long, and as a result Magnus has found them and is devouring the nuts, chips, and candy at a worrying rate. Other than that, the packing is perfect. Ana starts packing about two months before our trips and the suitcases lie open in our rooms as she packs, unpacks, repacks, does fashions shows for her mirror reflection at nights to fine tune the outfit selections, test outs various configurations of footwear (none of which ever seem comfortable enough to walk long distances in….but that’s the nature of ladies fashion I guess), then manages the contents right up to the last ounce of available weight limit. I imagine it’s a sight to behold, but I try to keep out of it and just get involved for 10 minutes the evening before we leave after weeks of ignored suggestions that I start packing my junk. I haphazardly throw some stuff in the case, then she comes in later and pulls most of it out and replaces it with more appropriate vacation wear. I don’t mind, and I wouldn’t be able to remember what I originally chose anyway. Plus, I usually wear the same pair of shorts the whole week.

Today we took two fifties-era Chevy classic car taxis to Guardalavaca, a town 18 kilometers away from our resort. It was a depressing journey. We’ve been there before and know the area so wandered through the small craft market near the Club Amigo hotel, then tried to check out the shops in the nearby plaza but they were all closed, save one whose shelves held only cigarettes, Havana Club rum, canned beans, canned mushrooms, Tabasco sauce, and a few ladies bras. The cigar shop around the corner was open but had very little for sale. Fortunately, they did have some boxes of Romeo Y Julieta number two tubos so I bought one (for a hell of a lot more than I paid three years ago when we last visited). The Boulevard leading to the public beach did have some restaurants open but there was hardly anybody there and the place was really beaten up. Down at the beach we stopped at the Pirate Bar for a drink. They only had two drinks: beer or pina coladas. No water, no pop, nothing else. We did order beer and pina coladas – the former were fine but the latter were made with a jug of water, some ice, then a scoop each from these two bags of powder lying behind the bar, then the ingredients were dumped into a blender held together with many wraps of brown duct tape. The last time we were here the place was hopping – full of locals drinking and having fun, families on the beach, and food flying out of the kitchen.

The pandemic has not been good for Cuba. But the Cubans have been here before, facing disasters so many times in the past, and always finding a way through. They will this time too.

Back at the hotel we hit the beach, did some snorkeling, had some beers in these nice big reusable plastic cups Ana had brought along, then went back to the rooms for a chill out session. Magnus had set his sights on buying cigars so had picked up a pack of mini-Montecristos in Guardalavaca and asked me to show him how to smoke one as it would be his first. Well, I was happy to oblige though Ana wasn’t particularly happy that the boy was picking up a punishingly expensive new hobby. We each smoked a mini cigar on the balcony overlooking the small pasture with horses grazing and the ocean in the background. Since he managed not to vomit, I’d say it was an outstanding success.

Posted by Kristofor Olson at 6:35 AM