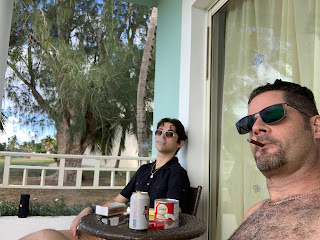 During Walking Club I like to sneak into neighbouring resorts to check them out. It’s quite easy, all you need to do is carry a towel or your shirt draped over the arm wearing your all-inclusive wristband. The resorts use different coloured bands but the Cuban guards at the entrances aren’t particularly diligent at checking these, so I just walk right in there like I own the place and am rarely challenged. Today I explored Playa Premium, a separate section of our resort that is reserved for high rollers (i.e. people that paid an extra couple hundred bucks for their trip.) The grounds were lovely, the atmosphere serene, and I didn’t see a single other person besides one lady in the lobby playing on her phone. I found their exclusive pool and, better, the classy men’s washroom which was pristine - recently cleaned, smelled lovely, fully stocked with paper, so I just had to use it. It was dreamy.

After a stomach-bursting breakfast, then an intensive 8-minute workout at the fitness centre with Stella (she had to check this off her list), we went down to the beach and I rented us some sea kayaks. I took the single and Ana and Stella took the double, and had a hell of a time synchronizing their paddling. When I couldn’t stand the yelling and screaming anymore, I slowed down and swapped places with Ana and Stella and I were able to figure it out. We paddled west across the water to a small tidal river that I’d crossed many times on a bridge during my walks, but had never been there on the water. The tide was going out so we had to struggle against the current, but we did make it under the bridge and up into the shallow river a short ways. By that time, Ana had tweaked something in her back, and mine wasn’t feeling so hot either, so we turned and worked our way back to the resort against a strengthened wind which took a while.

After lunch at the beachside restaurant Ana and I returned to the beach while everybody else scattered – Stella back to the room to do some schoolwork (I know, she’s weird), Magnus to the lobby to read and drink his 17th to 23rd coffees of the day, and John and Maria back to their room to catch up on more 70’s overdubbed action movies. Ana and I had a lovely time. We talked about this week’s experiment with the “Boomer Sandwich”, where you are taking care of elderly parents and kids at the same time. Then we immediately switched to talk of retirement, which was far more pleasing. I spend a lot of time and energy pondering this topic. This week I had found a perfect place for landing our dingy when we sail our boat down here. An integral part of our retirement plan is having a large inventory of plastic resort bracelets in a variety of colours that we can use to sneak into resorts while our boat is safely at anchor. It’s going to be easy. We cruise into the bay under sail in SeaLight then get anchored within range of my high-powered binoculars, with which I can see what colour of bracelet everybody’s wearing. Then, just before dawn, we launch the dingy, blast into shore, and stash it in the bushes, out of sight. We then snap on the correct colour bracelets and march straight into the resort and find the breakfast buffet and order 6-egg omelets and proceed to stuff ourselves silly, then we do the same at lunch and dinner and between those we hang out on the beach with all the rest of the happy Canadian tourists. Except that we’re way happier since we’re not paying for it and will continue to do this for weeks at dozens of resorts as we circumnavigate Cuba. By then we’ll have mastered the technique so will continue these victimless thefts across the entire Caribbean until we have visited every single all-inclusive resort. Watch for my upcoming ebook, “Scamming Your Way into Retirement”.

We all met back at the room later in the afternoon and Magnus continued his cigar apprenticeship by joining me on the balcony for a larger cigar. He had a mid-sized Montecristo and I had one of my Romeo Y Juliet number twos. I showed him how to properly cut the cap to leave a ring of it intact to hold the cigar together as you smoke it. I showed him how to evenly toast the foot of the cigar with double matches, after letting the sulphur burn off so as not to taint the flavour of the cigar. I also showed him how to use a cedar strip to light a cigar. He made it about halfway through his then sought permission to abandon it when he was starting to turn green. I smoked mine down to the nub, enjoying every puff. There’s nothing quite like smoking a Cuban cigar in Cuba.

Today was our first of two a-la-carte reservations. Imagine our surprise when we showed up at “El Romantico” restaurant just before 8pm and found a beautifully decorated, high-end restaurant with a man in a tuxedo playing piano on a stage. It was quiet, luxurious, classy, and there was Caribbean lobster on the menu. After being shown to our table, the professional waiter brought out bottles of red and white, opened them, then poured us glasses and left the white in an ice chiller between John and Stella. After the waiter left John poured Stella a sizeable glass and with a mischievous smile she drank it with glee.

The food was amazing. Soup course, salad course, main, and dessert. They used primarily the same ingredients that we’d had at the buffet, but exquisitely cooked, flavoured, and presented. The lobster was simply amazing and I don’t even remember the last time I’d eaten one. Partway through the meal Stella reported that she was getting a bit dizzy, so John topped her up and told her it was all part of the experience. Grandfathers are the best!

Posted by Kristofor Olson at 6:49 AM