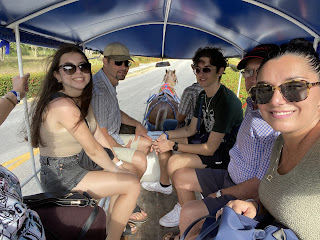 The end of the trip was growing near – only two breakfasts left, so I refrained from holding back once again and had a three egg omelet with everything on it. On the side of that I had eggplant fried in bbq sauce, toast, a pile of bacon, then after I demolished that mound I filled my plate back up with papaya and a spot of rice pudding and ate that too. Magnus had permanently checked out of breakfast with his family so we didn’t even ask him anymore, but the rest of us had a lovely and leisurely meal before returning to the rooms for a quick wardrobe change then over to the beach and got the same awesome spot that we had the day before – in the shade of a big tree in the company of dozens of lizards.

I grabbed a windsurfer from the nautical centre and went for a ride. The wind has been consistently strong all week, but what is not consistently strong are my arms and hands. When I was a kid I used to spend hours on my windsurfer at Fishing Lake, and I got pretty good after doing it for a few summers. I still have the knack now, but after spending 30 or 40 minutes zipping around in the bay, my hands literally curled into a permanent bend and stopped working so I sailed the rig back in and relinquished the remaining time of my one hour booking.

After chilling out at the beach base for a while, we packed up and headed over to Boulevard – this cool string of small restaurants and shops which are a part of the resort, but feel like a little village. We sat down at our favourite tapas bar for a fried chicken wing snack and drinks. We also ordered two plates of “sausages” but when they came out they sure looked like sliced-up hot dogs, which was an exciting development as a Cuban hot dog would be a welcome addition to the meal repertoire. After that we walked across the path to the ice cream shop and were served paper cups of ice cream, but they had run out of spoons so we just licked and sucked it straight out. Worked just fine.

One of the remaining things on Stella’s “to do” list was to use the swim-up bar at the pool, so while the others relaxed in poolside chairs, she and I paddled up to the bar, found two underwater stools, and figured out what to order. While there was plenty of booze, the available mixers were severely limited. The barkeep reported he had cola, strawberry slushie, and vanilla slushie. None of those piqued Stella’s interest, so instead of the previously planned alcoholic drink, she opted for a cola and ice while I had a small glass of beer. Check.

Everybody was up for a final visit to the plaza so we paid ten bucks for a classy horse carriage ride over there. In the only shop that was open, Magnus bought more min-cigars (and promised me these were going to be the last cigars he purchased until he next returned to Cuba), John bought some rum and, incredibly, sneakers that fit him perfectly. Ana browsed the scant clothing selection hard but could find nothing suitable.

The bar at the bowling alley was full of locals, enjoying their Saturday afternoon, but sadly the lanes were closed, so the hotly anticipated grudge match between Magnus and Stella would have to wait for another time. In their previous visit to the bowling alley earlier in the week, one of them scored two points higher than the other after a dismal start and triumphant finish. I won’t say which one.

Just before dusk, Stella reminded me that we had agreed upon a sunset photo shoot on the beach. So as lead photographer, I used her phone to capture a series of Insta-worthy shots. Stella playing with her hair, Stella walking the beach, Stella pondering the sunset, Stella with head cocked sideways staring serious into the camera. She found two she liked out of the 300 I captured. Job well done. On the way back to our rooms we stopped to admire a big mango tree and Stella found a nice ripe mango lying on the ground. We picked it up and stashed it away for tomorrow’s breakfast.

At 6:30 we walked into the beachside Cuban a-la-carte – our second and final for the trip. The meal was nothing like the previous day’s extravaganza, but it was still good. I was thinking Stella would get into the wine again, but she had picked up a bit of a cold and could barely keep her eyes open at the table. During dinner, Magnus and us had a rousing discussion on the value of history – studying it, understanding it, and trying to apply it to the events happening in our world today. Back in the early days of taking the kids to Cuba, dinner conversations usually centered around Dora the Explorer, lizards, and whose turn it was to change a diaper. I liked this better.

Upon returning to the room, Magnus and Stella discovered a gigantic spider living under their washroom trash bin so I was called over to relocate the beast. It was big and hairy and intimidating. With a combination of bathroom utensils, I was able to corral the 8-legger into a coffee cup then cap it and fling him over the balcony onto the grass, where I hope he lives out a long and purposeful life.

Posted by Kristofor Olson at 6:55 AM