2023 Holguin, Cuba - Uno, Paddleboating, and an Abundance of Sardines 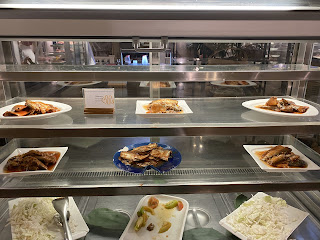 Portuguese people cannot pay cards. I don’t know if they are all colour blind, or number-confused, or if they just don’t pay attention, but something in their cultural make up does not jive with card games. We’ve been playing Uno with Ana’s folks. She explained the rules to them at the start, but they didn’t stick, and I get that – learning a new card game takes time. During our 10th game, which we just played here in the lobby near the end of the evening, here’s what happened after Ana dealt and flipped up a red 6 for her mom Maria:

“I need to pick one up,” Maria said in Portuguese.

“Mom, I told you, it doesn’t have to be the same colour. You need to match either the colour or the number.”

“Ohhhhhhhhh, ok,” Maria said as she dropped a yellow 9 on the pile.

“Ohhhhhhhh, ok, well I have a 6 too,” she said as she sorted through her cards and dropped it on the pile.

It was John’s turn. After Ana prompted him to go, he laid down a green 5.

I was the recipient of the punishing play so I picked four cards off the pile, huffing. Then we all sat there for a bit looking around.

“It’s your turn. John, what colour do you want?”

“Don’t tell us what you have, you get to pick a colour, remember? Wild card.” I said tapping on the black pick-up-4 card.

“That’s okay,” said Maria she put down a yellow 2.

“I thought I could pay anything on that one.”

“No Mom. You miss your tun too. Dad, your turn, the colour is red.”

“She shouldn’t have, she had to pick that one back up.”

“Mom, you don’t have Uno – look at all the cards in you hand. You only say that when you have one card left. And it’s not even your turn,” Ana said.

“Whose turn?” I said. Everyone looked around wide eyed and confused. “I’ll go,” I said then dropped a red reverse card. Everything stopped. “John?” I said.

“Are you going to play?” I asked. Portuguese will not take their turn until they have been personally invited by another player.

“But you just had three cards. Where did the other one go?”

“I must have dropped it,” he said.

Portuguese Uno is actually much more fun than normal uno because every round is such a surprise. And it takes all night to play like two games so can really burn away the hours at resorts where the evenings often move at a glacial pace.

When in Cuba, I run this thing called Walking Club. The idea is very simple. I get up at dawn and ask Ana and the kids if they want to go for a walk, and they almost always say no. I then get my flip flops and hat and walk down to the pre-arranged meeting area, meet myself, then go for a long beach walk. There have been times when other people have joined us on vacation and actually met me in the morning for Walking Club so I didn’t feel like such a loser. But I don’t mind the solitude.

But today, Stella had surprised me and joined me for Walking Club and we enjoyed a lovely beach walk as we talked, picked up shells, and leisurely explored the area. By the time we returned, it was off to breakfast. The morning buffet was calm and tranquil which was welcome after the events of the previous night. John has type 2 diabetes so has to consistently watch his sugar intake…except for when we go on vacation then he throws caution to the wind and supercharges that blood sugar level up by day drinking with me and raiding the dessert tray after every meal. Well yesterday his body completely shut down. First his vision started to go and the world became blurry. Then after lunch he threw up and fell into a weak stupor and was sent to bed and just laid there for hours, shivering a bit, and making frequent dashes to the bathroom.

We went to dinner in two shifts so somebody could stay with him and by the end of the evening he was starting to feel a little better. He had a decent breakfast but we did catch him hovering over the dessert platter eyeing the morning cake, but Maria threw him a stink eye and he wisely abandoned that idea.

Breakfast has been good – eggs, pancakes, fresh papaya, fresh bread, various types of pork.  But lunch and dinner have been lacking in ingredients if not imagination. We normally try to go to the a la carte restaurants but we were only able to get a single booking for Saturday because the resort is so busy. Ana then bribed us into another one for Friday, but until then it’s all buffet. The normally expansive menu items have been decimated, and the dishes have been varying creative combinations of the following: cabbage, tomatoes, pork, sweet potatoes, papaya, sardines, and canned tuna. I have never seen so many combinations of sardine dishes. In the morning they have display cases full of sardine plates - some in tomatoes, some in cabbage, some floating in oil, some all mashed up. We had fish soup one day at lunch, and it was sardine fish soup. One dinner specialty is seafood rice, guess what’s in there? Sardines and tuna. A lot of the food ubiquitous to Cuban buffets is simply absent – no beans, no bananas, no potatoes, no plantains, no beef, no fish (other than sardines). Thank God for pork. Those Cuban pigs really deliver. We’ve eaten twenty different styles of pork. Fried, ribbed, roasted, stretched, reduced, smoked, sausaged. I don’t know if it’s just this resort, but we’re hearing from friends in Canada and other ones are the same – many shortages. We’re back to 1990’s style Cuban resort cuisine after decades of progress.

We rented a paddleboat and all went out for a big tour around the bay, which was great until we stopped for some snorkeling and met a group of Quebecers on the reef who had somewhere found a long spear and were trying their best to spear tropical fish, no doubt making a mess of what remained of the living coral. I wanted to pull the snorkel out of my mouth and give them a verbal thrashing, but they were the ones holding the spear and those Quebecers are unpredictable.

Lunch was enjoyed at the tapas bar – fried fish chunks, which were sardines of course, and a small amount of fried plantains, which was a welcome surprise.

Because of the massive size of the resort there is a little diesel train that zips around all day, delivering guests here and there. We went for a nice long ride on the train and ended up at the sports club, where we played ping pong and checkers. The sports club was by far the best one we’ve ever seen; besides the three ping pong tables they also had archery, two pool tables, sand pits for horseshoes or bocce, shuffleboard, then a series of courts for volleyball, badminton, basketball, soccer, and tennis. Incredibly, all the equipment was in fantastic shape.

At dinner I discovered a condiment station, so I put yellow hot dog mustard and oil on everything. That helped. I also tried out one of the stuffed tomatoes. It was stuffed with cabbage and sardines.

After some drinks in the lobby bar and the Uno, we walked John and Maria back to the room then Ana, Stella, and I went for an evening beach walk under a full moon. Lovely.

Posted by Kristofor Olson at 6:40 AM