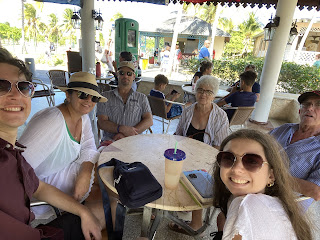 After a three-year, pandemic inflicted break we are back in Cuba. Playa Pesquero, in Holguin to be exact.

What do we like about Cuba? I’ll tell you a story.

Our flight from Hamilton yesterday was delayed due to a scarcity of baggage handlers, so we didn’t make it to the resort until around 11:30pm. After standing in line at reception check-in for a while, then catching a 6-man electric golf cart ride to my in-laws room to unload them and their baggage, then a final run in the golf cart to our room (which is adjoined to Magnus and Stella room) on the other end of the resort, then some rapid unpacking, quick brush of the teeth, speedy underarm deodorant swipes, visit to the 24 hour buffet for a sardine/yuca/rice/sausage/red wine snack, then a couple of wobbly-pops in the lobby bar to the soothing sounds of the drunken Quebecers getting nutty, we didn’t get to sleep until sometime after 2 or maybe 3am. So by the time we got up this morning, somehow tracked down Ana’s folks after forgetting to note their room number (it’s a massive resort and the black Cuban nights offer little in the way of landmarks), waited forever for the kids to get up, then found a suitable table for six in the busy breakfast buffet, there had already been a thousand people through one of the egg-cooking stations.

Which brings me to my story. As I waited in line for an omelet, I relearned that the Cubans who work in the resorts are simply amazing. By the time I reached the front of the queue, the lovely middle-aged Cuban lady sweating behind the smoking hot grill, skillfully cooking no less than five sizzling and dancing breakfast omelets at a time, was still smiling. And I don’t mean one of those phony retail smiles that the cagey, affectionless dude racking clothes at Winners spears you with when you ask where the gift cards are at as you’re impatiently trying to get in and out as quickly as possible. I mean like a nice smile where she looks into your eyes and reminds you of an aunt or grandma or maybe a friend of either or both of those. Cubans have an endless supply of patience and an ability to shirk off the sometimes revolting behavior of entitled foreigners. It makes you want to become best friends and perhaps Godparent one of their children or them yours. At one point during the day we counted up our previous trips and I think this is our 12th visit to Cuba, stretching over about 23 years. We love it here.

Besides the people, we love the Cuban winter weather. No scraping ice off windows, no furnaces, no ice storms, and no toques/mittens/scarves/boots. No shirt required. No shoes required. Just sun, beach, sand, and warm salty ocean water.

It’s different than the rest of the Caribbean. I’m not sure if it’s because they’ve been under the thick thumb of Fidelisimo dictatorship for over 60 years or that the economic embargo prevents many Americans from showing up here, but it is very much unlike anywhere else you may visit in these parts. There’s no crime, no obnoxious and culturally-vacant franchises, no suicidal drivers, no drugs, and few squint-eyed hucksters flogging local craftwork on the beaches. Of course, the Cubans have no freedom and there’s military dudes and cops everywhere eyeballing them at all times, but that’s a small price to pay for us foreigners to be able to swoop in and enjoy the culture in 7 day, all—inclusive increments at a very reasonable price.

What’s the last thing we like about Cuba? Oh yeah, the cigars! Sadly, today at the resort orientation meeting we were told that the Covid supply chain issues have affected Cuba severely, plus one or more of the recent hurricanes that seem to reliably hit Cuba every season, ripped the prime tobacco fields to shreds, so the cigar supply has been severely curtailed. In fact, we went into the onsite cigar shop today and their humidor was empty, save for a bunch of cartons of grubby Marlboro cigarettes, some cigarillos, and bottles of premium Havana Club rum, unsurprisingly unsold at over two grand a bottle.

It was a fine first day and gave us a chance to get a feel for the resort. Playa Pesquero is a huge place, definitely the largest one we’ve been to in Holguin and probably as large or larger than some of the big ones we visited in Cayo Santa Maria. At its opening in 2003 it was the largest resort in Cuba and has more than 900 rooms. It is located in a sheltered bay which provides calm waters for swimming and snorkeling the sizeable reef, and the beach is simply perfect. It’s going to be a great week.

Posted by Kristofor Olson at 6:12 AM