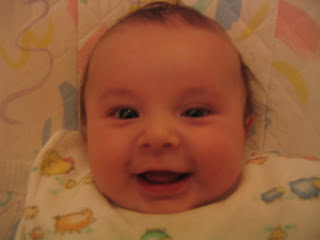 You've never seen anything as beautiful as your little baby smiling in his sleep.  I fed Magnus an "early riser" bottle this morning, then he immediately fell back asleep and gave a grand, gummy smile after he nodded off.  I couldn't go back to sleep after that because I started thinking about how lucky we are to have such a sweet, happy little baby and be settled back here in Canada with lots of visits to see family...something we have missed over the years.  I was feeling very touchyfeely until I realized I have to go to work today...drat!  We have one more week left of insanity on my project then we should have a little break from the overtime for a month or two at least.  I don't mind working more now, since January is such a dull month anyway and the weather has been rotten - it just means I can take time off later!  We have two trips planned for the year, the first is a long, long weekend getaway to Turks & Caicos during Easter and the second is a trip to the Azores in June or thereabouts.  Ana is so anxious to get back to the Caribbean and become an "island girl" once again.  Unfortunately, Magnus is only going as far as Ontario, he'll have the pleasure of grandparent attention (perhaps 'adoration' may be a more appropriate word?) for a few days while we are away.  It will be tough to be away from him but I will seek solace in conch salads and many, many Kaliks!  Mmmm, Kalik, I haven't had a Kalik in about three years, I am well overdue.  I wonder if they will taste the same?

Before my thoughts go completely to sun, sailing and beer, I better do a quick update of Magnus' new tricks.  He has recently:

1. Learned to sit up all by himself, but with the occasional carpet faceplant

2. Found his feet and learned to suck on his toes

3. Got a new car seat after outgrowing the old one

4. Received his second set of shots, and is now weighing in at over 22 pounds

5. Learned to pass things from hand to hand

6. Learned to hold his own bottle and drink from it (this one is hit and miss, he often just pulls it out of his mouth and stares at it, in stunned disbelief that his is actually feeding himself)

7. Realized that passing gas is really quite funny, and sometimes laughs after exploding

That's all for now, have to go wake up the rest of the family!

Posted by Kristofor Olson at 7:44 AM No comments: