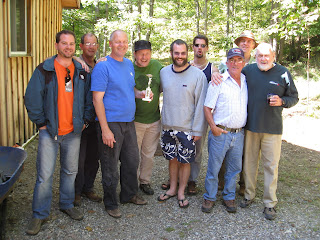 So is everybody happy that the election is over and you don’t have to see those wanker party leaders trashing each other on the news every night? Ana and I really paid close attention to this election, especially the issues related to where we live, which are mainly aboriginal land claims and manufacturing. We were happy that the Conservative guy in our riding won as we felt it was time for a fresh face, especially one that was part of the ruling party which will hopefully attract greater attention to our issues.

I must say that I was quite disgusted with the “vote anything but Conservative” that was promoted by a number of groups, such as the vote swapping websites and even the premier of Newfoundland! I was also shocked to hear Elizabeth May say that it might be better for Green party supporters to vote Liberal in some ridings. What?? The whole event seemed very negative to me. It seems to me that when we vote we should be voting for the person and party who we think will do the best job and move Canada in the direction that we agree with. It’s easy to shoot down ideas and trash peoples’ reputations but a whole lot harder to devise and sell policies that are good compromises and not impossible to implement. Contrary to popular belief, I think Elizabeth May and the Greens did a terrible job at the debates; instead of showcasing their good ideas and drumming support for her candidates all she did was join the others in bashing Harper. I am not a member of any particular party so I just vote for whichever party has the best leader and from everything I saw there was only one leader sitting around that table. Don’t forget, you’re not voting for the guy you’d most like to have a beer with, if you did then everybody who could would have voted for Duceppe; instead you vote for the best able to lead. That’s what I did. When the next election comes around, I’ll once again look at the options and make up my mind then.  It certainly seems the economy is in for a bollocking so we'll see how well this government does handles the country during difficult times.

Wow, bet you didn’t know this was a political blog!

Posted by Kristofor Olson at 6:07 PM No comments: