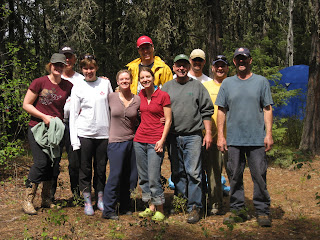 Cold beer, hot days, pleasant nights, weekend trips, fresh fruit, bare feet, green grass.  Summer in Ontario is full on and we’ve been loving it!  Ana’s mission is for us to visit somewhere interesting each and every weekend all summer and so far we’re right on track.  Upcoming trips will include Montreal this weekend, possibly my cousin’s Jeff’s wedding in Saskatoon after that, and then up to Mark’s cabin near Kingston to meet Marty, Jen and Leif for the August long weekend.  In August we have Ana’s cousin Nancy’s wedding in Vancouver and a couple other more local trips planned.  It will be anything but boring.

By aunt and uncle Barb and Gerry were here visiting for ten days and we had lots of fun and plenty of laughs.  My favourite phrase about uncle Gerry is, “the location may change but the jokes remain the same” – fortunately, they always make me laugh, especially the ones that come out after he’s had three beers.  The kids have been asking about uncle Gerry almost every day since he left – they got way too used to his constant attention with wrestling, throwing them around, singing songs, playing games, the best of which was “fetch uncle Gerry another cold beer”.  My dad was also in town for about a week and we all took a weekend trip to Bayfield on Lake Huron, which I think is our favourite region of Ontario so far. 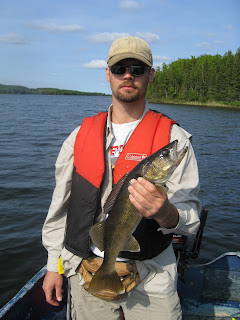 I was back in Saskatchewan in June for the annual fishing trip which was loads of fun as usual.  Marty made it back for this one too which was an extra bonus.  We spent a lot of time on the trip talking about how much fun it’s going to be when Magnus, Leif and Stella can join us, it will definitely add a whole new dimension to the trip.  The main change is we’ll probably have to switch to hard liquor because there will be no room for kids and 16 cases of beer in the boat.  Then again, I suppose the kids could be towed on a raft or something.

Magnus will be starting junior kindergarten at a French immersion school in September and he’s very excited about it.  It will be a sad day for Stella, though, when her best buddy starts being away from her for a whole day at a time - they really are the best of friends and have great fun together.

We have had some sad news recently - a dear friend of the family, Grace, succumbed to cancer after a long battle.  She was one of the kindest and most generous people I have ever had the pleasure of knowing.  Tragically, her husband was killed a few years ago in a tragic car accident, leaving their two daughters parentless.  Thankfully they are both extremely mature, strong, independent and capable which they will definitely need to get through this.  We hope to be able to support them in whatever way we can as they have been through a terrible time.

Posted by Kristofor Olson at 5:49 PM No comments: