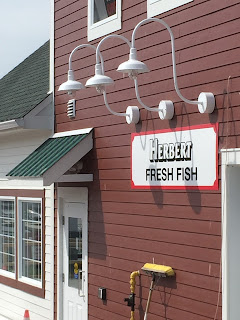 “Do you serve anything besides fish?” she asks.
“Uhhh.  Chips?” comes the unintentionally witty reply.
“Oh.  Nothing else then huh?  Ok.  I guess I’ll have the fish and chips.”
The meal is delicious.  Neither the fish nor chips are greasy and the food is not over-salted.  Plus it is served piping hot.  Is it the best in the world?  I can’t remember having anything better.  And there is not a scrap of food left over when the four of us are done eating.
We go for a walk around town to let the food settle, but also to try and free up some room for ice cream, although the kids never seem to have a problem with that.  We find what Mika calls, “the field of broken dreams” – a small, overgrown patch of land with abandoned boats.  One of them even has some trees growing up through it.
Our walk is cut short by attacking mosquitoes so we high-tail it to the ice cream shop, get some dessert, and then return to the dock and soak up the last of the days sunshine.  We spend a while in the games room after this, but everyone is exhausted after a hot day so we call it a night and prepare for tomorrow morning’s early departure for Tobermory.
Posted by Kristofor Olson at 3:57 PM No comments: 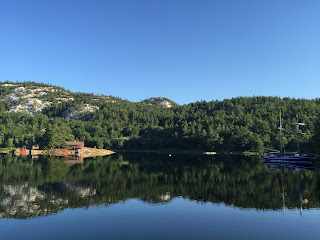 We are up at 5:30 and underway shortly after that.  Today marks the furthest point away from Sarnia we will be – about 250 miles – and now we will begin the long journey back.  Our route today will take us 60 miles so it is going to be a long one, especially since there is no wind to give us additional speed above the engine power.
I take a few photos of the glassy lake surface and sun as it is rising.  What a beautiful morning.  We have really lucked out with the weather on this trip.  It is possible to get atrocious weather, even at this time of year, so having a string of 30 degree days is a nice touch and makes the trip that much more enjoyable.
We cruise east through what is called the Whalesback Channel, round a narrow pass at Little Detroit and then proceed south-east through the McBean Channel.  We pass north of Fresnette and Fox Islands and continue all the way to Rouse Islands, and then turn south into the Wabuno Channel and finally into Little Current where we stop for a pump-out and diesel.  We make it there for 11:30 so have just enough time to get over to the bridge for the 12:00 opening.  From here we travel east past Strawberry Island and then turn north-east across Frazer Bay to the entrance of Narrow Bay.  At the end of this long bay we finally enter Baie Fine (pronounced “Bay Fin”) which is a slender channel leading to a completely secluded and protected anchorage called The Pool.  We arrive at 3:30pm, get anchored, then hop in the dingy and paddle over to the footpath that will lead us up to Topaz Lake.
We push our atrophied bodies up the rugged path for about a mile and reach the lake.  Since we did not see anybody else on the trail we are surprised to find a large number of people at the lake including a big group of goofy, giggly teenage girls and I have no idea how they got there because they did not arrive by boat.  I suspect they must have hiked in and their camp councillor couldn’t take it anymore and ran away like a madman through the bush.
Topaz Lake is slightly acidic, but enough so to kill off all living things so the water is incredibly clear, cold and deep.  I’m a little disappointed that we forgot to bring a mask, but nonetheless we find a space on the rocks to leave our bag and shoes and we all jump into the refreshing water which instantly cleanses us of the day’s grime.  Magnus and I swim over to the steep rock face that serves as the diving platform and scramble up the rocks to the 4 meter tower.  It’s a rewarding kowabunga as we fly through the air and plunge feet-first into the depths.  I swim back over to where Ana and Stella are but Magnus stays to have a few more jumps.  Before long, people start leaving and soon we are the only ones left, so we take a few minutes to enjoy the quiet and take some photos of the lake before drying off and heading back down the trail to the dingy.
Back at the boat we get to work on supper.  Tonight we are having grilled steaks, foil pack potatoes and salad.  Incredibly, this is the first time we have used the bbq on this trip, having made most of our meals on the stove, in the oven, or in the form of various fillings on bread or in buns.  The meal is delicious, and after we eat we sit out in the cockpit and enjoy a drink while the kids fish for crappies, sunfish and gobys and use up some of those worms we bought back in Tobermory, which seems like such a very long time ago.
When the kids tire of fishing they hop in the dingy and take it out for a paddle.  Magnus has become quite skilled with the oars so he takes his sister for a royal swamp tour, paddling right into the reeds at the end of the bay where they retrieve a purple pool noodle!  They deposit it back at the mother ship, and then continue on to the other side of the bay where they land and explore the rocky shore.  It is so quiet and calm that we can hear Stella laughing the entire way.
After dusk we hear a bit of commotion and look outside to see the tall ship from Gore Bay arriving.  The captain’s shouts and orders break the serenity of the bay and they seem to have a tough time getting anchored.  They arrive right at mosquito hour so I feel sorry for the chaps who were ordered to dive in the weedy water, swim to shore and tie the boat up to some trees.  I shut the hatch and we say goodnight to Baie Fine.

Posted by Kristofor Olson at 3:25 PM No comments: 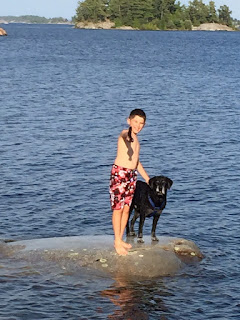 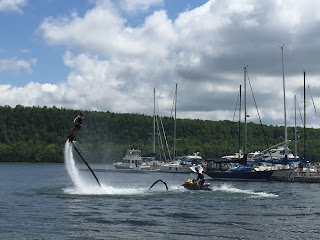 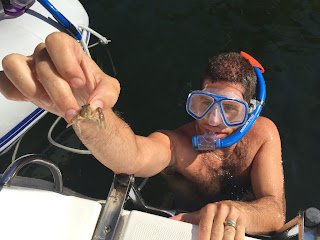 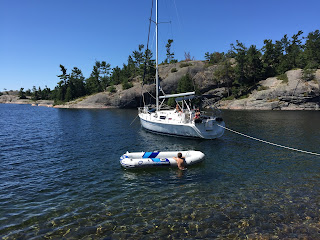