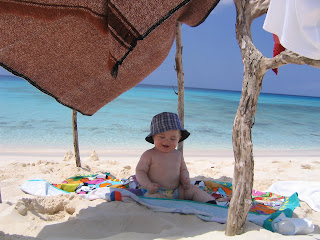 I'm home alone tonight for the first time in a long time.  Kris has a BIG go-live on his project this weekend and the fun starts tonight at 9:00 pm.  So I just dropped him off at Shell and it looks like it will be Magnus and I tonight.  As I was dropping him off he said that this is as close as an IT geek ever comes to seeing that "completed house"!!

Magnus is still a ray of sunshine, or is that a lightening bolt tearing apart our house.  He has been crawling for about 2 weeks and stands while holding anything he can get his little paws on.  It won't be long before he starts walking and then the real fun begins.  He is still at 26 pounds and has only grown an inch or two since the last doctor visit, which is fine by me.   I'm already running out of storage space for all the clothes he has grown out of.

I can't believe that it is already May.  Where has this year gone?  I'm now quickly facing the fact that I will be back at work in a few short months.  We have a very busy few months ahead so I'm sure it will be here before I know it.   This past month the weather has been wonderful and we've enjoyed several weekends in Alberta for a change.  We did a driving trip up to Drayton Valley near Edmonton to see Kris' aunts who live there and grandparents who were there for a visit.  It was a great trip. 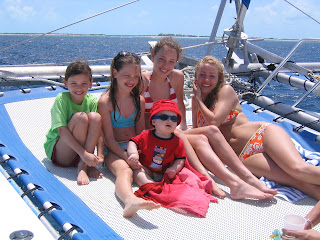 I will be returning back to WestJet in September, but hopefully be able to work from home a few days a week.  Kris is taking Fridays off to stay home with Magnus and the other 2 days he will be staying with his new nanny.  Thankfully we have been able to find someone who we are very comfortable with.  Her name is Maria  and she is a 64 year old Portuguese lady....no it's not my Mom, but the next best thing here in Calgary.  I met with Maria a few weeks ago and Magnus instantly went to her, so we are very lucky.  Makes the sting of leaving him a little less.

Our summer plans are heating up quickly.  Kris' annual fishing trip to Saskatchewan is in early June.  I'll be in Brantford during that time.  We will be back in Brantford for the annual Portuguese festival in mid June.  July long weekend we are in Fishing Lake for the 50th anniversary of the Olson Cabin.  It will be great to see the whole family there including the Pakistani contingent.  Immediately after that we leave for the Azores for 2 weeks with my Mom and Dad, Peter and Loretta (Kris' Dad and Wife) and another Aunt and Uncle of mine.  While we are there, we will attend my cousin Natercia's wedding and immediately upon returning will attend a party for my cousin Michelle and her fiancé Brad who are being married in Mexico in mid-July.

So it looks like we are free in August.  That month will no doubt be recovery and mentally preparing for the working life ahead.  The great thing about all of this is that we'll have many stories and tons of photos, so stay tuned!!

Posted by Kristofor Olson at 7:52 AM