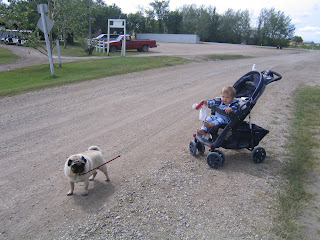 It seems nearly impossible that my most recent posting was back in March, though I suppose that's an indication of how busy this year has been for us.  What's been keeping us so occupied?  Mainly, the process of buying, moving and repairing a large house in Saskatchewan.  In addition to that, we've also decided to move to Ontario which has triggered a fair bit of administration.  To be frank, it would seem that our website has not been a priority as of late, but I believe this will be changing very soon.  Our "new life" in Ontario is giving us a chance to make some big changes in our lives, with our new focus being primarily on our expanding family (new baby due in two weeks!) and secondly on building up business and investment ventures for ourselves that will eventually provide a steady source of income.  There's a series of books that have been extremely inspirational to us - they are called Rich Dad, Poor Dad, written by Robert Kiyosaki.  The main focus of these books are illustrating how rich people and poor people behave differently with their employment, finances, investments, and expenditures.  If you have never read Rich Dad, Poor Dad I would wholeheartedly recommend it.  We have been applying the concepts in these books to our own situation and I can see that we are basically moving in the right direction.  I've also been very lucky to spend so much time with my uncle Gerry here in Calgary, who is an investment and tax wizard.  I've learned more from him about investments in a couple years than most people can hope to learn in a lifetime.  I'm really going to miss that.  But not as much as all the beers we drink together!

Okay, enough about finance, let's talk recreation!  Both Ana and my last days of work are August 18th, perhaps sooner if the baby arrives ahead of schedule.  Ana's folks will be arriving on Aug 25 and shortly after that we'll be heading off to Saskatchewan to show off our new baby and spend some time at the cabin at Fishing Lake.  We are planning to put on a roof extension in September to create an outdoor living space complete with brick patio, barbeque and likely some sort of refrigeration device for keeping the brewskis cold.  We are contracting out most of that work but have made sure to keep lots of smaller interior jobs for John, the window and door master, to do when he's there.  We spend two weeks out there in July and worked our butts off so this time we're planning on spending a lot less time working and a lot more taking it easy and actually enjoying the fruits of our labours.

Posted by Kristofor Olson at 8:17 AM