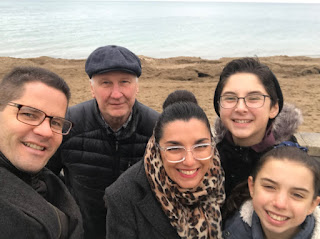 After too many years, we finally returned for a trip to Chicago to see my old buddy Mike Schaaf. Mike and I have been friends since working on a project together in the Bahamas twenty years ago, and have not just kept in touch, but have spent time together many times over that period. Mike’s been a great mentor to me over that time, as we work in the same field, but he has a much wider depth of experience, working in many different industries and countries over the years. He is also a 6' 6" gym monster and ruthlessly beat me into shape during our year working in the Bahamas. To ensure I didn't get too shredded I drank enormous quantities of Kalik beer, which kept me loaded with empty calories and resulted in half of my workouts performed in a state of queasy hangover. But man, we lifted a lot of weight! In fact, our Friday night leg workouts were the stuff of legend; we could barely walk down the gym staircase at the end of it. It was all I could do to stagger weakly to my local bar Hammerheads and prop myself up on a bar stool.

The lead up to our March break trip to Chicago was not encouraging. First, Stella got hit with a terrible cold and was congested so bad she was hardly sleeping. And then Magnus caught some kind of stomach bug and was blowing it out both ends for several days. This was during their school break so they didn’t even get the pleasure of missing classes.

That left Ana and I. We did not want to get sick before the trip. But in a moment of motherly love, Ana went and slept with Stella one night when she was particularly stuffed up and miserable. I had been quite successful avoiding contact with both of the germy spawn, but Ana broke down and exposed herself to the infection. I began avoiding her too as I had a feeling what was coming.

The kids suffered through it and perked right back up the day before we left. On Wednesday Ana reported some unusual joint ache as we drove down the 403 highway headed for Michigan and both of us were pretty sure she was going to get it, but still we hoped for the best.

We arrived in Ann Arbor, Michigan by around 7:30 pm, our first stop as we had decided to do the 9 hour trip to Chicago in two legs. I had been in nearby Detroit the month before for some work training and heard great things about Ann Arbor so we wanted to see it for ourselves. As we drove into town we were stunned by the magnificent buildings, most of which looked to be part of the University of Michigan, but there were also some government buildings and museums, all of which were enormous and well kept. We passed several university sports facilities - a football stadium, field hockey facility, indoor track and field complex, and soccer pitches, making us wondering how all this was funded. Sports in the US is a huge deal - especially college sports - and is in such stark contrast to Canada where there are college sports (apparently), but you just don’t hear much about them.

We had to drive around for ages to find a parking spot, but finally did and then went for a walk in the busy centre area. Despite it being Wednesday, the many restaurants and bars were loaded with people, as were the sidewalks, and all was bathed in light from the giant State Theatre marquee radiating dazzling colours.

We enjoyed a nice meal, did some people watching, and then drove back to the hotel which was actually a scary motel called the Red Roof Inn, but after seeing the name I started calling it the REDRUM Inn, but the kids obviously haven’t seen The Shining because they didn’t get the joke until I told them to spell it backwards. It actually wasn’t too bad - the room just had a faint odour of…something, but it didn’t stop me from having a great sleep.

The next morning we had a quick hotel-supplied breakfast of rock bagels with grape jam, gluey oatmeal and chocolate frosted sugar bombs, and then hit the road for the second leg of the journey to Chicago. After five hours on the road we finally arrived at my friend Mike’s house in Algonquin - a suburb north-west of Chicago. Mike hadn't changed - still big, muscular, handsome, and with an unimproved fashion sense - and coming from me, that's really saying something. In fact just after we arrived, the 80's called him and asked for their jeans back.

After a drink and a catch-up session with Mike we went for a big walk in the nature area close to his house. Ana’s cold or flu or whatever it was had fully set in, and she was feeling terrible, but joined us on the walk nonetheless. We talked non-stop, with hardly a break in the conversation, like it should be with old friends. The girls decided to go out shopping so Mike cracked out some beer and the three lads went out to the garage to scarf some suds and play with Mike's fine collection of power tools. Magnus, with Mike's help, fabricated an awesome wooden axe, and finished it just in time for the girls' return, and after some Chicago deep dish pizza, a ping pong round robin, and a bit of tv watching, we retired for the night.

Saturday was a huge day. Despite waking up feeling worse than ever, Ana used the power of coffee and cold meds to get her moving and soon we were out the door. We went for a huge, delicious, American-portioned breakfast at a local restaurant called "Burnt Toast", conveniently just down the road from Mike's place. The server brings out these bodacious, bountiful plates while I'm thinking "There is no way in hell I am going to be able to put a dent into that mound of grub". Fifteen minutes later my plate is clean and I'm picking away at the uneaten home potatoes on Stella's plate, and then Ana's, and then I go back to Stella's and eat the remaining half of her pancakes. I lova dis countdry!

We first drove to the nearby marina where Mike keeps his powerboat in the summer, had a quick look around, and then continued driving eastward right to the shores of Lake Huron. Here we turned south and followed the shoreline through some of the most expensive and exclusive neighbourhoods in the region, and stopped along the way for a beach walk. Suburb eventually turned into city, and we snaked right into downtown Chicago amidst the towering buildings and congestion of vehicles.

We spent the afternoon wandering the streets of Chicago, stopping first at the Art Institute of Chicago, but only making it in as far as the bookstore as we didn't have enough time to commit to properly exploring the museum. There I found a coffee table book of naked men and found an image of a particularly virile young Adonis with a python sized wanger and a magnificent sack. I brought it over and stuck it right in Ana's face, hoping to gross her out, but she just took the book and started flipping through it, interested. I considered buying it for her for Christmas, but it was almost a hundred bucks, so I decided instead to write her a love poem and work on a real good sexy dance.

Chicago downtown welcomed us in and we walked up and down the busy streets, ogling the magnificent buildings, watching people, popping into shops, stopping for lunch, and eventually making our way to Millennium Park and grabbing some photos by the giant stainless steel bean sculpture. From here we drove over to Navy Pier, the busiest tourist attraction in Chicago, and explored the lush indoor tropical gardens, shops, and the kids went for a ride on the giant Ferris wheel. The weather was not great as it was cool and there were intermittent showers throughout the day, but hey what do you expect for March in Chicago - a city not exactly known for its fabulous weather. But it is certainly a city full of life and I couldn't help but visualize us sailing Bella Blue all the way across Lake Erie, up through Lake Huron, and back down Lake Michigan right to one of downtown marinas and spending a good few days here in the heat of the summer.

The drive back to Algonquin was quite long as the traffic was thick and dense, but fortunately Mike had one of his famous cd compilations to listen to in the van. He calls them the "Best of Schaaf" but I just call them the worst music of all time. It's a deplorable mix of those songs that make you lurch for the tuner when they come on the radio and then stick in your head for days. We're talking John Denver, Peter Paul and Mary, "Afternoon Delight", "Seasons in the Sun", Captain and Tenille, "Rhinestone Cowboy", that sort of crap. Ana lucked out as she was feeling so terrible she had passed out in the back of the van, and the kids were just paralyzed at the sonic vomit leaching into their ears so they didn't even know what was happening. The worst part was I knew most of the words to the songs, which must come from deeply repressed memories from driving around in the back of my parents' wood panelled station wagons in the 70's, with the 8 track cranked. That's why Mike is the best - he marches to the beat of a different drummer. A bad 1970's drummer.

Sunday arrived - St. Patrick's Day and Mike and I were up early drinking coffee and chatting. But after watching the local news and seeing the massive waves of people rushing into downtown to watch the Chicago River being turned green (a 50 year old tradition) and the big parade, not to mention Ana sleeping like a corpse upstairs, we ixnayed the plan to head back downtown and instead decided to spend the day at Rancho Relaxo el Schaafo which seemed to suit everybody just fine. We visited, goofed around outside, Mike and Magnus build a birdhouse, Stella and I played ping pong, Ana drank tea and tried to get healthy, and then we all went for a short shopping excursion to the nearby super plaza. Mike's daughter Arielle, her husband Andrew, their dog Aslan, and Mike's sister Julie came over for supper and we had a lovely time drinking beer and wine, playing with the mutt, and putting together a nice feast. When Mike and the kids were outside chasing the dog around, Arielle and Andrew dropped a news bomb - they were pregnant! But we were sworn to secrecy as they hadn't told Mike yet and were planning an elaborate reveal for him two weeks hence. So we toasted the soon to be parents and then zipped the lips. It was a most excellent evening, and I could hardly wait for Mike to learn he was a grandpa!

We were up early the next morning, said our goodbyes to Mike and then started the return journey back to Canada. We took a slightly different route home, and the drive went well, making it back home in under nine hours. With another Power Weekend under our belts, I never cease to be amazed at the great variety of locations that surround us, and how easy and fun it is for us to travel to these places.
Posted by Kristofor Olson at 9:11 PM