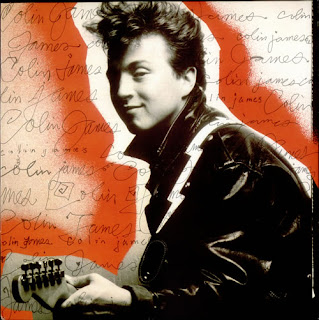 The very first piece of music I ever purchased was a 45 of Elvis Presley’s “Devil in Disguise”. I loved that song the first time I heard it and after saving up some allowance cash I went down to Sam the Record Man at the Confederation Park Mall in Saskatoon and bought it. I would later discover the real early Elvis stuff through a cd boxed set my folks bought– and it was pure one man country blues. This helped plant the seed that would turn me into a huge blues fan. But the one album that really started this for me was Colin James’s self-titled “Colin James”, released in 1988 when I was 16. I bought this cassette at least two times, as I played it so much it simply wore out. The album still sounds great now and “Voodoo Thing” is one of the hardest rocking blues tracks ever written – quite an accomplishment for a young prairie punk from Regina.

But Colin James was just the appetizer. His music would lead me to discover the guy who discovered him – the one and only Stevie Ray Vaughan, whose albums I devoured, but led me deeper still into the blues, for example his hero Jimi Hendrix, but also the classic blues men such as Howling Wolf, Robert Johnson. Willie Dixon, Sonny Boy Williamson, Albert King, Howlin’ Wolf, Albert Collins and so many more. It was actually a classmate and buddy of mine – Leonard Saludo - who helped me to discover this music. Leonard and I were talking music one day during the dreary bus ride to school and I was showing off what a blues expert I was by name dropping Stevie Ray Vaughan. He then started rattling off all his favourite blues musicians as I sat there with embarrassed, dopey eyes, barely able to keep up. He made me a few cassettes jammed full of amazing blues tunes and I consumed them like candy. What music! The songs was so simple, yet so powerful. One year Ana and I went to the Chicago Blues Festival and we got to meet Otis Rush and see him play at a local bar. He was a bit past his prime by then, but had such an incredible aura about him, and was so at home on stage. In fact, I think on stage was his home.

I attended the University of Saskatchewan in the early 90’s and most Thursdays of those years I could be found with my buddies at the most enduring blues bar in the prairies – Bud’s on Broadway. We were all flat broke so we could usually only afford one or two tall Rye & Cokes, so we made them last and sat there for hours listening to all the amazing blues bands that passed through town on the cross country blues circuit. They say the blues makes you sad, but I feel nothing but joy when I think back to those years hanging out with my pals listening to the scorching guitar riffs, the rock steady and rumbling bass, the snappy drums, the bitchin organs, and of course, the dirty growling vocals and distorted wailing of the harmonica solos.

This early blues exposure would lay the groundwork for my infatuation with so many blues rock bands over the years. Artists like John Campbell, Big Sugar, Tea Party, The Sheepdogs, The Cruel Sea, Jack White, the list goes on and on.

Blues is the root of so many musical styles, but Muddy Waters said it best when he sang: