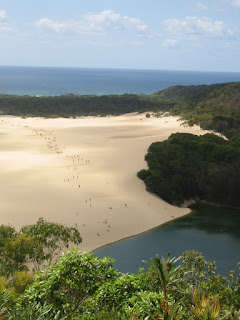 Today is Ana's birthday!  And we are celebrating by getting on a bus at 7:00 and traveling to Brisbane where we will go out for a nice birthday dinner and spend the night.  Tomorrow we will continue to Byron Bay where we will spend a night or two before making the final stretch to Sydney.

Our trip to Queensland has been magnificent!  We'd say that the six days sailing in the Whitsundays was definitely the highlight of our stay in Queensland.  It felt great to be back on the water enjoying the salt, sun and surf.  The only disappointment was the diving which was unremarkable, but we weren't too worried about that.  We put together a page on our sailing trip with plenty of pictures.  I was wishing that the boys from the Lost Shaker could have been with us on the trip as it would have been a great reunion!  After such a great time, Ana and I have decided that we definitely need to own another sailboat in the future! 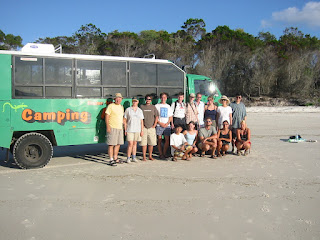 Last night we returned from a three day tour of Fraser Island, which is the largest sand island in the world with some amazing natural features.  There are no real roads on the island so the only way to get through the sand is with a good 4WD vehicle.  It is quite a feeling doing 80 kph down a beach with the surf crashing in!  One of the most amazing things we did was a hike across a huge "sandblow" which was just like being in the middle of a desert.  The hike ended in a beautiful clean freshwater lake that was great for swimming.  Now that I think about it, I better put together a little feature page on Fraser Island. 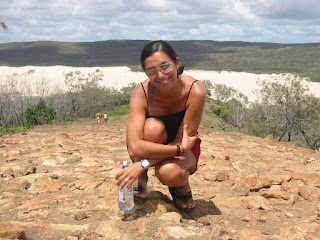 We are getting very close to the end of our time in Australia.  It has been an extremely easy place to travel through due to the highly developed (and competitive) tourist industry.  By the same token it makes it much more difficult to get off the beaten path and explore on your own, which is what we like doing.  Oh well, we are going to get plenty of that in South America so we're just enjoying the easy traveling while we have it!

The next update may be from New Zealand....

Posted by Kristofor Olson at 11:44 AM