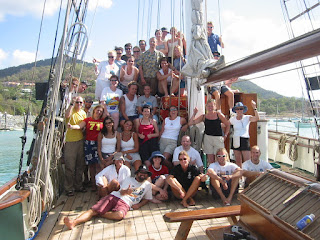 It's already been a week on the east coast and the time is passing much too quickly.  Ana and I arrived in Airlie Beach this evening after a 12 hour bus ride from Cairns which was surprisingly relaxing and comfortable.  Tomorrow we embark on a six day and night sailing trip around the Whitsunday islands on the Solway Lass - a 127 ft Tall Ship!  We are hoping that this will be one of the big highlights of our trip.  The ship was built in The Netherlands in 1902 and has been through two world wars, four name changes, innumerable countries, and has served as a cargo vessel, ice breaker, war ship, coal transport, floating restaurant, and now a fully restored tourist sailing vessel (check out www.soxsail.com.au).  Our plans after that are to visit Fraser Island on a multi day trip then work our way toward Sydney in time for our Nov. 30 departure to New Zealand. 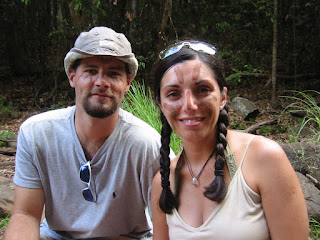 We had quite a nice time in the Cairns area.  We found Cairns to be a very busy tourist town, but quite a fun place to be.  The first hostel we stayed in was called Castaways and seemed okay until we found that our bed was infested with bed bugs which were biting us as we were sitting on the bed.  Unfortunately, the office was closed by that time and there was no staff around so we had no choice but to strip the bed and clean it the best we could then put our own sleep sheets on it.  We still got a few bites during the night but not too bad.  The next day we found another place called Dreamtime Traveler's Rest which turned out to be a real gem with great staff.  From there we took a lovely two day tour to their sister hostel called On The Wallaby which was located near a rainforest.  We went on some interesting walks in the forest as well as biking, swimming, and even canoeing where we saw three platypussies (not sure of the grammar on that one, but that's the most humorous word I can think of for the plural of "platypus").  Strange little creatures, sort of half duck half muskrat but impossible to differentiate between the head and the ass end.

One thing that has surprised on the east coast is the tourism saturation.  It is certainly one of the more commercialized areas we've ever been to.  In fact, there's so many backpackers around that it's sometimes tough to find an Australian!  The average age of backpackers here is also much younger than it was in South Africa, likely because this is such an obvious place for a first time traveler to visit, and I think that any 20 year old would find the party of their life here!  The other day we saw a t-shirt in a shop window that said, "The Liver is Evil and Must Be Punished!".  Made me think of my time in the Bahamas... 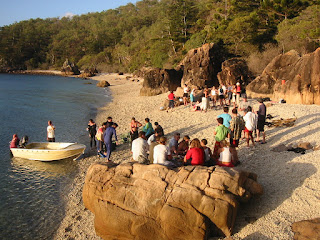 We were lucky enough to meet up with our friend Pavin, who is from Saskatchewan but is currently in school in the States.  We spent an afternoon together in Cairns enjoying the sun and some cold beers before seeing him off to the airport for his flight back home.  Too bad he wasn't staying overnight then we could have punished our livers more thoroughly.  Actually, I'm going through a little dry therapy at the moment after the ten days I spent boozing with Jamie in Western Australia which I enjoyed thoroughly and am still enjoying every time I look in the mirror and see those little spare tires peeking over my swimsuit.

Next update after the big sailing trip!

Posted by Kristofor Olson at 8:31 AM