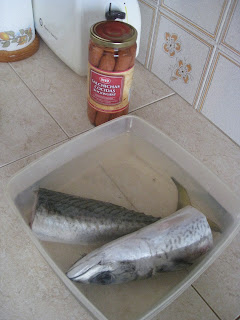 Today was going to be a bit different, as we planned to take a 24 hour trip to Terceira, which is the second most populated island in the Azorean chain, and located approximately 75 miles north-west of Sao Miguel.  Ana’s mom and dad had decided to come with us so Ana took off first thing in the morning to pick up her mom and buy the tickets, then go out and do some shopping, unencumbered by children and husband.  For some strange reason, both the kids wanted to join her on the shopping expedition but I talked them into staying with me with promises of adventure and ice cream.  All they really cared about was the ice cream.

Before leaving for the day, I had to snap a photo of the day’s planned evening meal – bottled German hot dogs and a nice fresh cavala fish, the wieners obviously for the strange North Americans.  After breakfast we walked down to the Lagoa pools and though it was drizzling a bit at first, the clouds broke up and it turned into a lovely, warm sunny day.  The natural ocean pools make it a paradise for exploring, and Magnus spent two hours scouring the rocks in search of crabs and any other marine life which crossed his path, while Stella and I lounged around and swam a bit.  We noticed one of the lifeguards pointing to something out in the sea and we looked to find a huge pod of dolphins heading towards us so we jumped on the highest rock we could find and watched them speeding and leaping through the water, locked in a race to get....whereever they were going.  Stella was quite thrilled to see them, and we did call Magnus over to see but he was much too busy crab hunting and couldn’t be bothered.

Ana arrived some time later and we had a nice lunch at the poolside snack bar, then all went for a swim in the invigorating ocean water, which was probably about 19 degrees so provided a bit of a shock upon entry.  Magnus and I put on the masks and did some snorkeling, along the way finding a few crab shells, sea cucumbers, crab claws and saw hundreds of nice tropical fish. 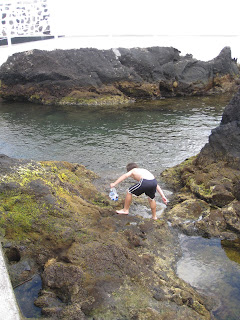 After the pools, we head back to tia Ana’s house for a quick bite, packed up our stuff, then head down to the ferry terminal.  We were able to take a car with us for an extra twenty euro so I drove the car in and the others went through the passenger line and we all met up inside.  The ferry was huge and inside had a store, a restaurant, televisions and plenty of comfortable seats and tables.  As the seas were flat the crossing was smooth so the only concern was the outcome of the Portugal/Spain soccer game, which was playing on the radios as the tv signal didn’t reach the boat out in the water.  At full time, the match remained scoreless and, sadly, Portugal lost in penalty kicks. Fortunately, the Portuguese are not completely insane, so there was no violent uprising.  If it had been an England match on the same ferry, and England lost, those limey blokes would have started smashing the place up, ripping out seats, overturning the popcorn machine, and demanding more beer.  The Portuguese accepted the defeat gracefully and were probably glad it was at least a close match. 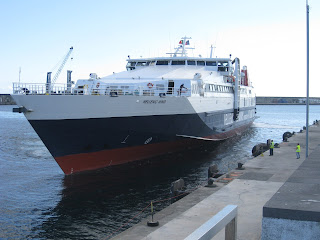 3.5 hours later the ferry docked at the town of Praia da Vitoria, which is located on the east side of the island.  We piled into the car and head off to the city centre in search of the hotel we booked, called Espirito Santo, for which we had an address, but no clear directions.  The towns are so densely packed that addresses don’t often help you much anyway, the only way to find places are to know the landmarks.  So we drove up and down winding streets, around roundabouts, back up the same streets, through one way streets the wrong way, up a pedestrian only walkway which sure looked like a road to me, then nearly down a staircase which I didn’t notice but was saved by Ana’s dad screaming at me and pointing furiously.  We finally pulled over and Ana asked some folks at a cafe, who set us in the right direction and we were able to find it.  They checked us in quickly and took us to our rooms, which were simple but very clean and would do nicely for the night.

Posted by Kristofor Olson at 6:41 AM