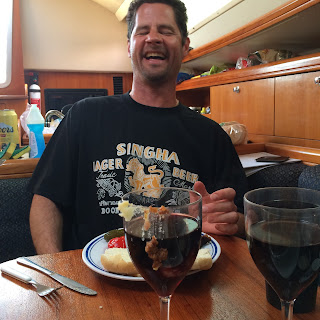 When one has an unsettled sleep it is difficult to separate reality from the dream state.  The sleeping arrangements on Bella Blue were such that Dad and I shared the large back berth while Curt was on the converted dinette bed and brother Mards was snoring like a chainsaw from within the v-berth.  Dad was first in therefore further astern while I had the privileged side of the bed where it was unnecessary to climb over anybody to go for the midnight piss.  Sometime during the night, I felt a disturbance in the Force and I partially opened my eyes to find I was being tea-bagged by my father in his attempt to pass over me unnoticed and get to the can.  Though my vision was mostly obstructed, it seemed he was stretching his nearly 65 year old body into a yogic Warrior 2 position. Now it could indeed have been a dream, except I'm pretty sure I remember him pausing and letting out a giggle as he was outstretched and in the "sweet spot".  I just hope that one of the brothers wasn't colluding to collect the money shot on their mobile device and post on social media to my embarrassment.  But since I have yet to see any disturbing shots on the #teabagyourson or #nutsmeetface hashtags I am pretty sure the boys slept through the whole thing.

I awoke dutifully to my iPhone alarm that sang its beautiful melody at 5am.  My bed buddy Dad woke up too and together we untied the lines and had Bella Blue back on the water and before long we were out of the Detroit River and crossing Lake St. Clair.  Though not considered specifically as a Great Lake, Lake St. Clair is still pretty big at 23 by 12 miles.  It is very shallow though so we keep the boat within the shipping channel that cuts right across the lake and is dredged to a depth of about 27 feet.  The boys woke up when we were about halfway across the lake and joined us in the cockpit for some hot coffee.  There was minimal wind so were under motor power and soon reached the mouth of the St. Clair River, which would eventually lead us to Lake Huron.  The first thing we noticed was the unbreaking string of beautiful waterfront homes on the banks of the US side to the left.  To the right, on the Canadian side, were ducks.  And lots of grass, weeds and trees.  We also noticed a big change in the water colour, from the dusty grey tones in Lake St. Clair to ever deeper hues of blue and amazing clarity.  In fact, you could be easily fooled into thinking it was ocean water.

I left the boys in the cockpit and went down in the galley to whip up a massive egg scramble for breakfast.  I gathered up the eggs, hot peppers, cheese, pate, cold cuts, stewed tomatoes and onions and put together a magnificent breakfast for the crew.  Thus far our breakfasts had consisted mainly of cereal and toast but as we were nearing the end of our journey I had to start using up some of the food supplies.  After stuffing our faces and cleaning up, we returned to the cockpit and left Marty down below to do some homework.  He just doesn't feel right unless he's done at least two hours of essay writing per day.  In our younger days we probably would have made fun of him and taunted him endlessly, but we were much more mature now.  We didn't have to say anything.  Instead, we just went down in the cabin from time to time and farted on him.

The clouds and rain of yesterday had passed and we were now enjoying full sunshine, though it was still very chilly on the water.  The wind had died to nothing and Bella Blue motored steadily, cutting through the beautifully flat and clear water.  We were literally the only boat on the water despite traveling up  a major shipping channel.

Dad was struck with a wonderful idea and climbed onto the mostly inflated dingy that was still lashed to the top of the boat, and stretched out for a nice nap.  Curt and I remained at the helm and had a hearty discussion on the future of Uber, technology, television, marine electronics and the inevitability of pervasive internet.  We also noticed on the chart that the Canada/US border cut right up the middle of the river so our path took us from country to country as we followed the spots in the river where the current seemed to be the least strong.

"I wonder if you need a US fishing license when your boat is on the US side of the river?" I pondered aloud.

"Depends on how far you can cast," Curt replied as he motioned to the invisible border well within casting range.

In the early afternoon we arrived at the town of St. Clair and decided that this would be our final destination for the day.  We briefly considered pushing through to Sarnia, which was only about 20 miles further upstream, but decided we were in no rush and would instead enjoy the rest of the day exploring the town.  We radioed the drawbridge operator and he lifted the gates for us which allowed us to pass through and into the St. Clair Boat Harbor marina.  We pulled in at the gas dock, got the boat tied up, then realized the temperature had rockteted up about ten degrees being away from the icy cold river water.  So we started shedding layers and soon the boat was covered with soggy rain gear, toques, gloves, sweat pants, hoodies, socks and so on.  A staff member came jogging down the dock, pumped $30 worth of diesel in the fuel tank, and tried to empty the holding tank but their pump out machine didn't seem to be working properly.  He directed us to take whichever slip we wanted so we pulled Bella Blue over to a nearby slip, got her tied up, put on shorts, got the deck chairs set up, cranked up the tunes, and then cracked out some cold beers and enjoyed the glorious hot sun.  A dude came paddling by in a kayak and didn't return our friendly waves, so we decided to save up our empty beer cans and pelt them at him if we saw him again.

We decided to go for a walk to explore the town.  We walked out of the marina and alongside the expansive park which ran down the length of the river as far as you could see.  We passed a Burger King, a Tim Horton's and then came to a small open air mall so we wandered through to see if we could find a beer store.  There wasn't much of interest in the mall, but we did find a greasy spoon breakfast joint that would be perfect for tomorrow.  We also did find a beer store tucked in at the end of the mall, but decided to continue to exercise the atrophy our of our legs for another mile then pick up fresh brewskis on the way back.  The rest of the walk was pleasant enough, but we were pretty sure that it would be a lot more fun sitting on our asses back in the boat drinking beer, so we loaded up at the beer store with cheap US suds and returned to the boat with a crushing load.  I think this is known in the States as the "Canadian Walk of Shame" as all the Canadian boaters undoubtedly raid the booze stores then have to stagger back to their boats piled high with their booty.  It's surprising how much you can carry when you know that you are saving 50% off the regular Canadian price for alcohol.

Back at the boat we dove into our fresh beer and got the fishing rods out for a round of casts in the marina, which yielded no fish, but was very satisfying nonetheless.  I grabbed  another cheekful of Red Man and the boys fired up cigars, man this was feeling just like a fishing trip now.  We also decided to finish off the final casserole that Ana had made for us - a gigantic pan of sheppard's pie, so I cranked up the oven, popped it on, then we got back to lounging on the dock.

Somebody noticed that we were picking up a Canadian cell tower so I gave Ana a ring to give her a trip update and find out how the kids were doing.  We were having a lovely chat and then she asked, "How is your clothes supply?"

"Have you run out of underwear?" she asked.

A long pause.  Then I replied, "Was I supposed to change them?"

The conversation wrapped up very quickly after that.  And by that time we could smell heavenly casserole aromas wafting out from the belly of the Bella Blue so we moved our bellies down below, got the table set and the wine poured and then sat down to enjoy our meal. I tore through my first slab of sheppard's pie, stopping only to drink wine and load up on more peppers and pickles.  The food was delicious.  I reached over to load up another piece and as I maneuvered the overladen serving utensil over my wine glass and back to my plate, a quarter of the piece separated from the rest and landed right into my wine.

Well goddamn if I hadn't just created a new drink.  So I lifted my glass (which still had an ample smear of hamburger and potato sliding down the side) and we raised a toast to the Edmund Fitzgerald.  It was simply divine.  And Dad gets the prize for the best line of the trip.

After dinner we cleaned up and settled in for a few rounds of Kaiser then a final championship game of Settlers of Catan.  Before bed, we stepped outside for a cigar and saw a small US Coast Guard boat practicing all these crazy docking drills in the marina - moving rapidly from slip to slip, forwards and backwards and doing 360's.  Whomever was driving certainly knew how to handle a boat.  We also saw a muskrat swimming around in the marina, keeping well clear of the props.

The krusty kayaker paddled by again but we couldn't find the empty beer cans so instead gave him the ultimate Canadian insult - we didn't wave.  Or nod.  I hope he got the message.

With that we called it a night.  I scurried quickly down below to our shared berth so I could claim the inside position and avoid another midnight tea-bagging.
Posted by Kristofor Olson at 3:31 PM