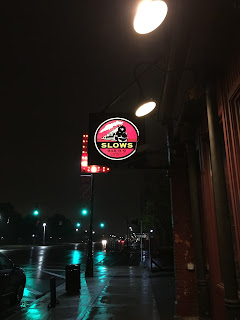 Though the plan had been to get up at 3am and set sail, the previous night’s festivities resulted in a heavily fogged crew and none of us woke up until 7.  I was up first and got to work prepping the boat.  By the time I had filled up the water tank Dad was awake so gave me a hand cleaning the boat, re-inflating the dingy, sorting out the lines and making the all important first round of coffee.

We pushed off around 8, headed north west and found decent wind, though it was heavily overcast and there was lots of debris in the lake, as if there had been a storm somewhere.  Typically in Lake Erie, heavy storms result in all sorts of junk being washed down the rivers and into the waters.  Fortunately in a sailboat you aren’t moving too fast so it’s easy to avoid such objects, and even if you do run into something big like a log or board, the keel tends to gently push everything away from the propeller and rudder under the stern of the boat.

Today’s destination was the Motor City, which was located at the start of the Detroit River, which joins Lake St. Clair to Lake Erie.  We sailed for a couple hours across the west end of Lake Erie, then fired up the engine as the winds started to die.  We stayed within the commercial shipping channel and kept a good lookout for freighters, though surprisingly didn’t see any.  We soon reached the mouth of the Detroit River and bid farewell to Lake Erie.

I popped a giant lasagna in the oven and soon the delicious pasta smells started to overpower the terrible hangover smells in the belly of the boat.  We put the boat on autopilot and sat down to enjoy a lovely meal of lasagna, bread, and uncle Michael’s peppers and pickles.  Dad had purchased a three litre box of red wine back in Put-in-Bay for 8 bucks so we filled up our cups and killed off the rest of the hangover.

The Detroit River is very wide and has a current of 2 to 3 knots, depending on the width with the narrower stretches having the faster current.  So though we were motoring at 7 knots we were really only moving at 4 to 5 so our progress for this leg of the trip would be much slower.  Though this is regularly a very busy shipping channel with freighters loaded with everything from coal to iron ore to wood to merchandise, we passed only one or two of them.  And though these are massive boats, they threw a barely noticeable wake.

As we throttled up the river we were quite amazed with the number and magnificence of houses along the US side.  It seemed that every possible space along the river had been built on, and many were true mansions, though there was the occasional small cottage.  By contrast, the riverbank on the Canadian side was populated mainly with ducks, cattails, grass and the odd house.

By mid afternoon the rain was really coming down so we alternated turns at the helm with turns in the bunk catching up on sleep.  While Marty and Curtis were at the helm we passed beneath the Bluewater bridge which connects Detroit to Windsor, and they snapped some fantastic photos, some through the lens of the binoculars!

I called ahead to a place called Kean’s Marina and booked us a slip for the night.  To get to the marina we actually had to go around Belle Island and then back downstream for a mile so enjoyed the full force of the current and wound Bella Blue up to 10 knots – the fastest she has ever moved!  We managed to find our assigned slip and dock with no problems besides navigating the rushing current.  The marina looked very old and I noticed immediately that the docks had overhead power lines and each of the slips was metered – something I had never seen before.  We were back in range of the Canadian towers so we all made calls home to the family then shuffled up the cards for a game of Kaiser and a round of wine for happy hour.

As this would be the only city stop on our trip, we wanted to find a great place for dinner so Curt did some research online and came up with Slow’s BBQ in the Corktown district of Detroit.  Meat, meat and more meat.

We called a taxi and he appeared at the main gate of the marina in minutes.  This is the first marina I’ve traveled to where the entire area was not just gated, but it had a security guard 24 hours a day.  We jumped in the car, told the taxi driver where we were going and  began our trip through iconic Detroit.  The driver was full of all sorts of information, nearly all of which was completely fabricated, and directed to me as I was in the front seat.  Pointing at an abandoned apartment building he said, “That’s the Ford building.  Headquarters.”

“That’s the Ford headquarters??  You mean the Ford motor company?” I asked incredulously.

We then passed a shoddy office building and he said, “Parliament.”

“Parliament building, for Michigan,” he explained.

“Is that right,” I replied.  I wasn’t going to dig further, this guy either took me for a complete idiot, or perhaps he was a complete idiot.  Deflecting conversation, I mentioned how much more expensive gas was in Canada compared to here.


“2.5 liters.” He stated flatly.  This conversation was over.

We arrived at our destination, paid the taxi dude, and then shuffled over to the lovely neon Slow’s BBQ sign.  The only problem was that Slow’s didn’t seem to have a door.  We pushed our faces up against the window and saw the restaurant was packed full of people, but how they actually got in was a mystery.  Curt eventually found the entrance, which was hidden in plain sight – a oversized wooden panel structure without a handle that just looked like part of the building facade.  Fortunately they didn’t ask us for a password to get in, but they did ask for a US cell number so they could text us when our table was ready, which was going to be at least 45 minutes.  The delicious smoky meat smells were driving my stomach wild.

“We don’t have one,” Curt said.  “Can’t we just stand here and you can tell us when the table is ready?”

“Nope,” the host replied.  “Need a cell number otherwise I can’t put you in the system.”  We looked at each other and weren’t sure how to proceed.  So we went to the bar to get a beer.  Within 5 minutes the host came over, told us a table was ready and guided us there.  I guess we found a loophole in the system.

Slow’s was packed full of bearded hipsters and their dates.  Most of the wait staff sported fancy mustaches and plaid shirts except the beer slinger behind the bar who simply looked like a biker with giant ear holes.  The beer list written on the chalkboard that covered an entire wall was expansive and featured beers with funky names like Oddside Bean Flicker and Green Flash.  I hadn’t heard of any of them, but they all sounded divine, in a hoppy kind of way.

Our cool dude server helped us order, ensuring that we covered all the main meat groups (smoked turkey, pulled pork, chicken wings, beef, ribs, brisket) and a respectable sampling of the available sides (mac & cheese, corn bread, chili cheese fries).  He brought out the bucket of chili cheese fries first and they were outrageously delicious – imagine crispy fries buried under a pile of beef chili then lathered with gravy and cream cheese.  We gobbled those down like ravenous wolves, sending a strong signal to our stomachs to prepare for the inevitable onslaught of food.  The rest of the dishes came out shortly after that and we dove in, stopping only to breathe or to request beer refreshes from our fine server.  Each dish was extraordinary, especially the sides, which are too often an afterthought in BBQ joints, but here they stood up well on their own.   In fact the mac & cheese was probably the best I have ever eaten.

We staggered out of Slow’s under the weight of many kilos of food and drink and flagged down a taxi.  This taxi driver had no idea where the marina was so we just told him to drive downtown and keep going in that direction.  He had no GPS, no working cell phone and no meter, but did have a great story about nearly getting shot by an armed rider who decided not to pay his $15 fare.

We eventually found the marina and were soon standing beside Bella Blue enjoying a free dock piss, most commonly done after 11 o’clock and 11 beers.  The boat’s holding tank is 25 gallons, but it fills up quickly with four people on board, so any time you can grab a free leak you take it.

Back inside the boat we started setting up the Settlers of Catan game but Marty wordlessly piled into the v-berth and we didn’t hear from him again.  So Dad, Curt and I enjoyed a game and a few more drinks, and then retired for the evening, looking forward to a solid rest before our planned early morning departure.

Posted by Kristofor Olson at 10:09 AM