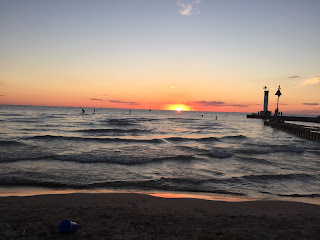 We motor out of the harbour at 6:30, bid farewell to the salt mine and point the boat towards Grand Bend, which is 30 miles south.  The waves are big but coming from slightly behind the boat, making for a much smoother ride than the pounding you get when you are sailing directly into them.

We approach the main beach just after noon and sail by to see the massive crowd that has already formed.  I was hoping to be able to anchor out here and dingy into the beach, but it is much too choppy for that so we proceed into the marina and get tied up to a dock with the help of the dock master.  Once on shore the sun feels twice as hot so we slap on a touch of sunscreen and walk into town.

There is nowhere else like Grand Bend on a sunny Saturday of a summer long weekend.  In fact, if you had never been there, and were taken there blindfolded, plopped down on a beach chair, and then had the blindfold removed, you would not think you were in Canada.  The expansive beach with its soft, clean, light brown sand and the incredible turquoise water would leave no doubt that you were in the Caribbean.  But then you go for a swim and notice that the water is cold and there is no salt in it.  The beach is lined with sunbathers, people playing volleyball, kids playing in the sand, and large tent structures where multi generational Indian, Portuguese and Chinese families have set out full buffets of delicious smelling food and are laughing and eating.  So you follow the crowd and walk up the main street to find every stereotypical beach shop you imagine - vendors selling flip flops, inflatable beach toys, wake boards, t-shirts that say things like “I’m with Stupid”, hot dogs, candy floss, hats and sunglasses.  There are wild looking bars selling buckets of Corona beer for $25.  There are guys trying to talk you into taking a parasail ride, or renting a Sea Doo.  And the crowd, whoah boy.  There are scary looking bikers with their scarier looking wives riding pristine Harleys.  There are muscled, tattooed shirtless dudes with washboard stomachs everywhere you look.  There are hot chicks in bikinis strutting down the street, proudly displaying their ample assets.  There are Asian tourists taking photographs of everything.  There are Italian grandmas and grandpas holding hands and eating ice cream.  There are beer gutted, hairy dudes wearing Budweiser hats, and packs of lads with pencil thin beard lines, expensive sunglasses and flashy smiles looking to score.  There are families with kids and babies in strollers.  There are groups of bachelorette girls, already drunk, with Sharpie marker writing on their bellies.  There are fishermen carrying their rods and bait buckets.  There are posers on sport bikes winding up the engines.  There is a steady line of cars, from monster trucks to Lamborghinis to roadsters to souped-up Honda Civics to station wagons, some cruising the strip, others looking for impossible to find parking spots.

Then you notice your first clue - Poutine vendors.  French fries slathered in cheese curds and gravy, sold nowhere else but in the Great White North.  Oh yes, and the Canadian flag tattoos.  Everywhere you look you see them – they are on biceps, backs, stomachs, necks, calves, thighs, breasts and asses.  You are in Canada.

We walk down main street, stopping to browse at every second shop.  We work our way down to the beach complex where there is a huge kids play area and soaker pad.  The kids horse around in there for a while and we find a shady place to sit and do some people watching.  We try to go for a beach walk, but once we get down to the water’s edge, there are just so many people to weave through that we call it off, and instead go for lunch at the beach-side Gators restaurant.  For such an over-the-top tourist place, the food is better than you would expect, and the prices are very reasonable.

After lunch we continue browsing the shops, but this time we walk up the other side of main street.  Ana finds me a pair of sunglasses, nearly identical to the scratched ones I have for ten bucks.  The kids each buy a bag of mixed candy.  Ana buys a couple of small things.  I am shopped out nearly before I began, so I just loiter in front of the stores and look around.  When there are no more stores to explore, we walk back to the marina.

As we are crossing the main street we are passed by a young girl wearing skimpy, black lingerie bottoms and a top, but the top isn’t actually hooked on; she is just holding it over her chest.  There’s a skinny dude walking with her.  They both look high on something other than life.  The kids see them but it barely registers as they are more focused on scoping out an ice cream shop.

We do find an ice cream shop along the way and buy some cones and enjoy them during the walk.  Back at the boat we chill out for a while in the cockpit, enjoying the hot sun, but watching the threatening looking black clouds on the horizon, inching closer.  As the clouds approach, this causes a mass exodus of people from the main beach, and from the marina where we are docked we can see people packing up their gear, getting into their cars and queuing up to leave.  Soon those violent, cold wind gusts  arrive and start smashing the boats around.  But then, inexplicably, the black clouds circle around a bit, and then move south and all of a sudden the blue sky and hot sun return and we are back to where we left off!  Ana and the kids decide to go down to the small beach that is just a short walk from the marina, and I mix up a rum and coke and Cuban cigar and am left solo in the cockpit with a lovely setlist of music playing in the background.  All is good in the world.

Nearly one Cuban later, Ana and the kids return and as they are washing off their feet with the tap on the dock I see a big snake cruising on top of the water heading in their direction.  I call Ana and motion to the snake, hoping she will see it and distract the kids so that Magnus doesn’t notice it.  But she is further away and thinks it is a turtle so she calls the kids over to see it.  Magnus is temporarily paralyzed, but snaps out of it and doesn’t get nearly as riled up as I was expecting, although he does make a weak-hearted pledge to never swim in Lake Huron again.

There has been a steady stream of people returning to the beach, but the storm cloud once again appear on the horizon, then there is a mass exodus from the beach back to the cars.  Then the clouds  break up.  Everyone marches back to the beach.  This happens several times, and it’s hilarious!  In fact, it seems that we could sit here in our slip all day and keep ourselves easily entertained by watching all the activity going on around us.

It is soon time for the highlight of the day – sunset.  We walk down to the beach, stand together and are mesmerized by nature’s show.  There are many people there and there’s something inspiring about so many strangers being drawn together, on the beach, in this place, at this exact moment, to enjoy something so simple, and yet so dramatic.  The blazing red sun eventually drops into Lake Huron with a small flash and the show is over, but nobody is in a rush to leave.

We finish up the final evening of our sailing vacation by attempting to watch a full movie, but of course we just can’t keep awake.  Movies and sailing somehow don’t seem to fit together very well.
Posted by Kristofor Olson at 9:21 AM