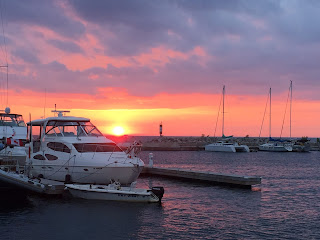 We glide out of Killarney shortly after 4am under a clear, starry night.  The marina looks beautiful with the LED lights outlining each of the docks.  Once we are clear of the harbour Ana goes back to bed after I get my lifejacket on and tie myself into the cockpit.  This is something we always do when only one of us is on watch.
I have a course set for Tobermory and I don’t see any other boats for hours.  Though the day started out completely calm, the wind slowly starts to build and by the time we are approaching Tobermory there are three foot waves and the wind is right in our face.  Our original plan was to stop in Tobermory for a pump-out, diesel and groceries, but we decide instead to skip it and head directly for Port Elgin, which is down the east coast of Lake Huron and the first major stop from Tobermory.  The entire trip will be approximately 104 miles so it is going to be a long sailing day, especially with the choppy seas.
Though the boat is getting belted by waves, the kids sleep in until 9:30.  Magnus is in the aft cabin with his head next to the straining diesel engine and Stella is in the v-berth slumbering right through the rising and crashing of the bow into the waves.  That’s the advantage of starting kids when they are young – it all just seems normal to them.  It makes our lives much easier.
I am able to keep a cell signal most of the time and there has been a wind warning and squall warning issued until 6:30 pm.  Hopefully we don’t catch it, but if we do then we’ll just reduce sail and ride it out.  Magnus starts feeling a little seasick so he pops a Dramamine pill and it sends him almost immediately back to sleep.
The day lumbers on, the wind continues to blow, and the darkening skies to the south start to threaten.  We have a faint cell phone signal so I take the opportunity to upload a bunch of journals to the blog site.  That eats up a few hours, but time still seems to drag by and the kids are getting restless and bored.  Those dark skies finally meet us head on and we are hit with a big rain storm and strong, gusty winds.  Some of the waves are getting to the two meter level so the boat is getting rocked about, and since we are heading into them there is a fair bit of pounding as the boat rises up one wave and smashes down into the next.
It is 7pm and Stella is asking me every ten minutes how much longer it is to Port Elgin.  She is driving me crazy.  I decide it’s time to shake things up so I put on “Uptown Funk” – the latest pop music juggernaut – and challenge the kids to a dance competition to try and break their Great Lakes Funk.  Well, their sour mood has poisoned their sense of fun, so as the only participant in the challenge I give it my best.  Most of my regular moves are hard to pull off because of the boat heeling and rocking, so I look even more awkward and rhythmically challenged than normal.  But I do manage to get a couple smiles out of Stella while Magnus keeps his eyes glued to the video playing on his pc and is silently thankful none of his friends are around to see this.
After dancing for what seems like an hour, but was sadly only five minutes, I abandon that line of entertainment and get back to my position at the helm, leaving the rest of the crew to mellow down below in their stew of discontent.
We are finally within visual distance of Port Elgin and those last four miles are a killer.  The closer we get, the further away it appears, and I swear the trip log and clock are running in reverse.  I grit my teeth, concentrate on the task at hand, and muscle through those last few miles as the sun is beginning to set behind me.  We finally reach the harbour and motor slowly into the gas dock where we are shocked to find about a hundred people sitting in lawn chairs and on benches or walking around eating hot dogs and ice cream.  They are all there for the nightly Port Elgin show – the sunset.  Now normally when there is a sizeable crowd on the dock, it’s when you flub every part of the landing process and make a complete fool of yourself.  I feared for this today because it was a long, hard sail and we were all tired and cranky, and this is never a good recipe for a successful docking.  But you know what?  It was fine.  No problems.  And we were completely ignored by every single person on that dock, almost as if we didn’t exist at all.
We get the boat tied up then eject the kids and tell them to go explore the beach while we make supper.  I take a few snaps of the setting sun, which is sensational with the backdrop of storm clouds.  Ana cooks up a delicious meal of Mahi, corn, beans and salad and we eat with conviction.  This highly anticipated feeding knocks my lights out and I am sleeping by 10pm.  I don’t know what happened to the rest of them, but as I was heading to bed Magnus was getting the Pictionary board set up...
Posted by Kristofor Olson at 6:30 AM