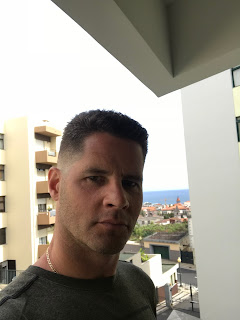 I got a haircut today. After trying to find a barber shop in the Azores that was open and didn’t have six people waiting in line, I had given up. But today I passed two of them, and the second one was in the back of a tattoo shop where they were playing great hip-hop music, so I slipped in, sat down, and asked for a cool haircut. My barber - a 35-year-old tattooed dude from Luxembourg, was happy to oblige. He must have spent 20 minutes with four different types of clippers just doing the sides and back, and then a few minutes snipping the top and he was done. I’ve been sporting the exact same haircut for, well I’d say approximately 30 years. In elementary school I had a rat tail for a year or two, but my hair was so curly it just looked like a big fluffy bun on the back of my neck. Then in high school I had a checkerboard cut into the sides, but people started calling me Archie, so I abandoned the look and went with a basic “short on the sides, a bit longer on the top” which has served me well all these years.


The haircut came out so well I considered getting a tattoo as well. I was thinking maybe a big sperm whale on my arm, or a Portuguese flag on my leg, or some cool Chinese script wrapping around my neck, or maybe even an image of Daryl Hall and John Oates, one on each butt cheek. But then I remembered that I really don’t like tattoos, even if I did love the idea of Hall & Oates aging along with me as my butt wrinkled and sagged into the golden years.


After yesterday’s frantic automobile adventures, we decided to leave the car parked and explore Funchal on foot. After breakfast in the apartment we walked several long blocks west to find a purse store Ana was interested in. She bought a purse in the airport in Sao Miguel and somehow found out there was an outlet of that same store here, giving her an opportunity for swapping out her current purse for a purse she loved even more, or maybe even keep that one and get a new one. Nothing excites Ana more than purse shopping, and it gives me a chance to stand outside and do nothing for 30 minutes, which can be fun if there’s enough interesting things to look at, and there certainly was here.


We continued wandering and Ana’s retail radar started pinging off a shopping centre a couple of blocks away, so she zeroed in on that and we followed. That’s when I serendipitously found the barber shop, so we split up Scooby-Doo style and each went off on our respective missions. At the end, Ana was thrilled with my haircut, but not as thrilled as I was to see the beautiful hundred-euro ring she bought.


With the retail therapy accomplished, we walked down to the marina and went into the CR7 Cristiano Ronaldo museum and saw all his trophies, awards, accolades, golden boots, Ballon d’Or, and other awards he’s won over the year. It made me wonder what ever happened to that participation ribbon I was awarded when I played soccer in grade 7.


There were three cruise ships in port today, and thousands of tourists wandering around - many more than in previous days, so we wandered around like tourists ourselves, enjoying just being out on such a lovely warm day and enjoying that sunshine and ocean breeze, especially after hearing that the weather back in Ontario was still crap and freezing rain was in the forecast for our arrival.


Strangely, we chose a lunch place right in the tourist area and the meal was predictably mediocre. We usually try to get out of the tourist area to eat, but the kids were starving so we gave in. But after that we went to McDonalds to have ice cream as the McDonalds ice cream is one thing you can always rely on no matter where you are in the world. Along the way we passed these two middle aged tourist couples, who had plopped themselves on chairs on a busy pedestrian street, right at the street edge so people had to walk right in front of them to get by. The men had taken off their shirts to expose horrific home-drawn tattoos, pasty white skin, and impressive beer guts. Thankfully the women hadn’t taken off their shirts yet, but it looked like they were just getting started on the booze so maybe the big show would happen later. After we passed I said to Ana, “I bet they are English.”


“How do you know that, they weren’t talking when we passed by.”


“Because they are all wearing watches. English people always wear watches when they vacation in sunny countries so they can take them off when they get home and have all their work buddies notice the white band around their wrist and ask ‘Where ya bin ya lucky bawstid?’”


We passed by them again after our delicious ice creams and heard one of them say, “Get ee aw sore-ed mate” which proved my suspicions correct.


The kids wanted to play on the gym equipment we saw the other day, so we walked over there and Ana and I went to investigate the cable car ride while they played. It was packed with tourists and the return trip was going to be about $70 so we decided to skip it. Instead, Ana and I sat down on the break wall of the ocean walkway and soaked up the sun while the kids goofed around. I laid down on my back and had a luscious power nap with the sweet rays beating down on my face and freshly exposed, white skull. Magnus played so ferociously on the parallel bars that he blistered his palms and was asking for band-aids.


The gang decided to head back home for a chill-out session, and along the way we stopped at a grocery store and picked up some pizzas to cook for supper (and band-aids). The plan was to eat at home and then go out later for a drink, but once we got settled we were quite happy spending the rest of the evening reading, writing, watching tv and relaxing.
Posted by Kristofor Olson at 11:28 AM