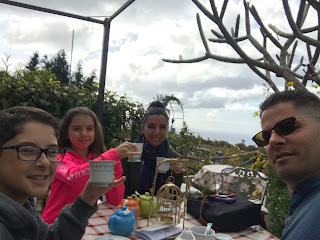 We were packed up and out of the apartment by 8:30. Realizing we had some extra time before we had to be at the airport, we made one final stop in the town of Machico. It is one of the few places on the island that has a beach, so we found a cafe and enjoyed a final, ocean-side coffee before heading off to the airport to catch our flight.


The flight home was long, but good, at least until we got close to Toronto where there was a wicked ice storm in progress, delaying our landing by over an hour. Then we had to deal with international arrivals at Pearson terminal 3, which was a mess as usual. They have installed a vast number of these fancy immigration machines that are supposed to automate the arrivals process, but they also make you stand in four separate lines just to make sure you don’t get through too fast. You first stand in line for the machines. After that you stand in line for somebody to look at the receipt the machine produced. You are then either directed to the next stage or to another queue to speak with a regular immigration agent (just like the old process), where they ask you a bunch of intrusive, irrelevant questions and then write a secret code on your receipt. It seemed that well over half of the people arriving were directed here. You then stand in line at another queue where somebody looks at the receipt and the secret code written on it, and they can send you to a different queue for additional screening and inspection. If you make it this far you finally get to the baggage area and wonder what third world country you’ve dropped into - there’s two tiny tv screens listing flights and baggage areas, and they’ve put the screens right at the entrance so everybody had to stop there and look at it, blocking all the people coming up behind them. Out of the 3000 people jammed into the baggage collection area, about half of these need to use a bathroom, and they’ve got a grand total of two small bathrooms - one for men and one for ladies, which are always an utter disaster. The baggage trolleys are now free, but my favourite Pearson process was years ago when all the baggage trolleys were tied up in a machine and you had to put in a loonie to get one, and there was nowhere to get change. But that didn’t matter, because most foreigners wouldn’t have any Canadian cash yet anyway, so the carts often went unused. When your bags finally arrive, you must go through yet another queue where they reserve the right to send you off into further inspection of your bags.


Here’s how it works in Europe. You get off the plane and go into immigration. There are lines for EU passport holders, which they always breeze right through, and lines for other passport holders, where you must talk to an immigration officer. They never ask you where you work, or what three countries you last visited, the name of the place you are staying at, or much of anything else. After this you get your bags and then walk through either the “Something to Declare” aisle or the “Nothing to Declare” aisle. At the second one they pull random people out to check their bags. At the first you show them what you have. And then you are done.


Sorry, I had to get that out. Canadian and US airports, their security and their processes are simply horrible. I really don’t know why this is, but over the years of traveling to so many different countries, the only place where we consistently and predictably have problems, inexplicable delays, and terrible treatment are in Canada and the US. And no, I do not feel safer for it.


It took nearly three hours from the time we landed to when we were finally at our van, and just under ten minutes to chip off the quarter inch thick sheet of ice that had accumulated on all the windows. We considered getting a hotel for the night, as the roads were horrible and risky, but in the end, we really wanted to get home so we took our time on the roads, kept each other awake, and made it home before 1 am.


Man, was I in a bad mood when I wrote that! Now that I’ve recovered from my Pearson airport experience I can think clearly.


We had such a fantastic trip. Seeing all the family again in Sao Miguel was just the best. They are all such lovable and fun people, with hearts of gold and a sense of hospitality that is enviable. Ana and I always feel so comfortable there and find that the values they hold match so well with ours. I do think that in the future if we do not end up living there, then we will definitely be spending substantial amounts of time in the Azores. And the way I see it, living on a boat could be a perfect fit - spend the summers in the Azores or the Mediterranean and the winters in the Caribbean. Sounds like a dream, no?


Adding on the Madeira portion of the trip really capped off the vacation. Seeing a brand-new place, exploring, and getting that extra couple degrees of temperature was simply fantastic. We even managed to return home with a bit of a sun tan.
Posted by Kristofor Olson at 6:16 AM