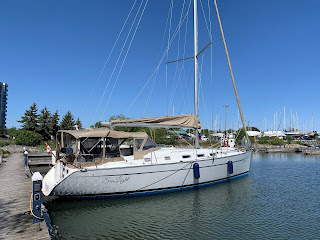 We are back on the water with a wonderful new-to-us sailboat named Sealight – a 2005 Beneteau Cyclades 43.3 which we hope will someday take to the Caribbean, the Azores, the Great Loop, continental Europe, and beyond!

Like the family matriarch, she is an experienced beauty. She was born in France and sailed across the Atlantic to spend the first years of her life as a shiny new charter vessel in the British Virgin Islands and was surely host to hundreds of guests. As the new boat smell became nothing but a distant memory, she was sold to a Canadian couple who sailed her back to Canada and spent many years sailing her on the Great Lakes. She was then purchased about 4 years ago from the fellow who sold her to us. He sailed her back down to the Caribbean and spent two years in semi-retirement cruising from island to island, knocked that off his bucket list, then returned to Canada to move onto different adventures.

So now, she is ours, and a welcome addition to our family. I had little confidence we would find a boat for this season, but Ana never gave up and her persistence found us a boat that checked nearly all the boxes of our “next boat” list. The one it doesn’t check is being a catamaran, but we realized that this was not the right type of boat for the type of sailing we’ll be doing for the next few years.

Sealight has three closed cabins, each with its own ensuite head (bathroom), a gigantic comfortable cockpit, a full cockpit canvas enclosure, 200 litre diesel tank, 500 litre water tanks, solar panels, new sails, new paint, new propane oven/range, a 54 HP Yanmar diesel engine, and a great electronics package. She is a full ten feet larger than our last boat so feels monstrous and I expect will sail very differently (likely better) as she has a standard battened mainsail instead of the roller furling main and a much deeper keel, drawing a full 6.5 feet.

The boat is in Whitby, which is just east of Toronto, and we’ve decided to keep her there for this season and spend the summer exploring Lake Ontario. We got a small taste of the lake two years ago when we sailed Bella Blue from Lake Erie to the Thousand Islands and we liked what we saw, but realized there was much, much more to explore.

We’ve spent the last six weeks working on her and getting her in shape for this season, which included installing new flooring, putting on new bottom paint, re-caulking the heads, fixing and waterproofing the canvas enclosure, replacing mattresses, putting new lettering on the hull, and cleaning her extensively from top to bottom.

But now, she’s ready to go. And last weekend we put her in the water, which was an adventure in itself...

Posted by Kristofor Olson at 7:50 AM