A Power Weekend in Montreal - Sunday 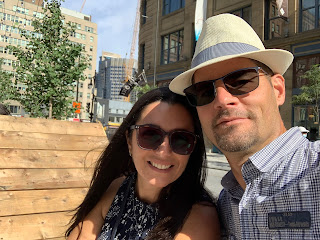 Power weekends are all about power breakfasts, so we got ourselves packed up and checked-out then drove up to the groovy Mile End neighbourhood, northwest of downtown, to look for a café. We first went for a quick walk to check out Fairmount avenue but found ourselves mainly alone, with most of the shops closed, and a chilly wind blowing in our faces, so we slid into the Faberge café and found a cozy booth. Breakfast was decent, the crowd was Bohemian, but my favourite part of the experience was our server’s tshirt which read, “Fuck Le Gluten”. Now I don’t speak much French, but that message came through loud and clear.

By the time we finished eating there was a long queue of people waiting to get into the café. Besides opening up the sidewalk patio tables, they had also slid open the patio doors and flipped out these nifty built-in seats and a table that allowed them to seat an additional two customers. Fairmont street was now fully alive and that chilly wind had been replaced by beautiful sunshine, so we set out on a walk to explore the neighbourhood. While Ana popped in and out of shops I just stood on the street, or sat on benches watching the people of Montreal walk by.  And what I saw a lot of were Jewish wearing these nifty fur hats. The Jewish religion is one in which I know precious little, but I do find that whenever I get curious and look into any aspect of Judaism, I get way more than I bargained for and can spent hours going down the internet rat hole. Ana told me the bosses of the temples get to wear the fancy hats. But after a couple of searches I learned that may not be the case, and all Hasidic (not sure what this means, maybe Orthodox?) Jewish men are supposed to cover their heads on the Shabbat (Sabbath, I guess?) and if you have to cover your head, you might as well use a fancy fur hat (called a Shtreimel) instead of some low class Montreal Expos ball cap or Toronto Blue Jays toque. 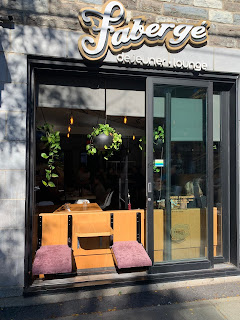 I pried myself away from my phone browser to just pay attention to what was going on. I first saw one Jewish man, then another, then another. And they were all in a rush to get somewhere. They were never just standing there looking lost or chit chatting with each other. I couldn’t tell where they were actually going, as often they would just cut down a sidewalk and go into a house, or boogie into an alley, or disappear into a vehicle and drive away. And they were all carrying these long things in plastic bags, which looked like they could be cello bows or maybe even long stems of plants. Even mighty Google couldn’t help me figure out what those things are. It all reminded me that I have so much more yet to learn. 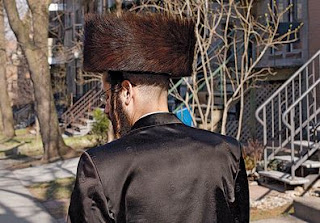 Ana found a great consignment shop and would have been in there all day, but I went in and broke up the party as it was now getting close to noon and we had a long drive ahead of us. We snaked our way back to the car, on the way passing some amazing fresh produce markets and an entire street that that had been closed off to vehicles and filled with tables and chairs to create a gigantic outdoor patio for the restaurants there. We had hoped to pick up some authentic Montreal treats from Fairmount Bagel but the line extended out the front door and wound around the corner, so sadly it’s going to be enriched white toast bread for the kiddies this week.

With that, we got into the van, drove southwest across the island of Montreal, bid farewell to this fine city, and were headed home.

Posted by Kristofor Olson at 7:24 AM